The Bell P-63 Kingcobra was an American fighter developed in World War II from the P-39 Airacobra in an attempt to correct that aircraft's deficiencies. Although the aircraft was not accepted for combat use by the USAAF, it was successfully adopted by the Soviet Air Force.

Although superficially very similar to the Airacobra, in fact it was a completely new aircraft with no interchangeable parts. It had better high-altitude performance than the P-39, thanks to the fitting of a supplemental turbocharger and a laminar flow wing, but it was still considered inferior to the contemporary P-51 Mustang at higher altitudes.

American allies, particularly the Soviet Union, had a great need for fighter aircraft, however, and the Soviets were already the largest users of the Airacobra. Therefore, the Kingcobra was ordered into production to be delivered under Lend-Lease. The Soviet Government sent a highly experienced test pilot Andrey G. Kochetkov and an aviation engineer Fiodor Suprun to the Bell factories to participate in the development of the first production variant, P-63A. Initially ignored by the Bell engineers, Kochetkov's expert testing of the machine's spin characteristics that led to airframe buckling eventually led to a significant Soviet role in the development. Amusingly, after flat spin recovery proved impossible, and upon Kochetkov's making final recommendation that pilots should bail out upon entering such a spin, he received a commendation from the Irving Parachute Co.

P-63A-8, SN 269261, was extensively tested at TsAGI in the world's largest wind tunnel at the time. Soviet input in the development was significant, and USSR being the largest buyer of the aircraft, Bell was quick to implement their suggestions. Vast majority of the changes in the A subvariants were direct results of the Soviet input, e.g. increased pilot armor and fuselage hardpoint on the A-5, underwing hardpoints and extra fuel tanks on the A-6, etc. Soviet Union even experimented with ski landing gear for the P-63A-6, but this never reached production. Most significantly, Soviet input resulted in moving the main cannon forward, favorably changing the center of gravity, and increasing its ammo load from 30 to 58 shells, for the A-9 variant.The P-63 had an impressive roll rate, besting the P-47, P-40, N1K2 and P-51 with a rate of 110° at 275 mph. [citation needed] 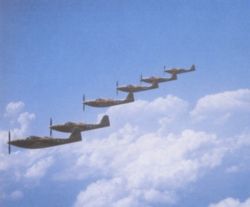 Air Transport Command ferry pilots, including US women pilots of the WASP program, picked up the planes at the Bell factory at Niagara Falls, New York, and flew them to Great Falls, Montana and then onward via the ALSIB [Alaska-Siberia] Route, through Canada, over Alaska where Russian ferry pilots, many of them women, would take delivery of the aircraft at Nome and fly them to the Soviet Union over the Bering Strait. 2,397 such aircraft were delivered, out of the total 3,303 production aircraft (72.6%).

By a 1943 agreement, P-63s were disallowed for Soviet use against Germany and were supposed to be concentrated in the Soviet Far East for an eventual attack on Japan. However, there are many unconfirmed reports from both the Soviet and German side that P-63s did indeed see service against the Luftwaffe. Most notably, one of Pokryshkin's pilots reports in his memoirs published in the 1990s that the entire 4th GvIAP was secretly converted to P-63s in 1944, while officially still flying P-39s. One account states they were in action at Koenigsberg, in Poland and in the final assault on Berlin. There are German reports of P-63s shot down by both fighters and flak. Nevertheless, all Soviet records show nothing but P-39s used against Germany.

Overall, official Soviet histories played down the role of Lend-Lease supplied aircraft in favor of local designs, but it is known that the P-63 was a successful ground attack aircraft in Soviet service. The Soviets developed successful group aerial fighting tactics for the Bell fighters and P-39s scored a surprising number of aerial victories over German aircraft, mostly Stukas and bombers but including many advanced fighters as well. Low ceilings, short missions, good radios, a sealed and warm cockpit and ruggedness contributed to their effectiveness. To pilots who had once flown the tricky I-16, the aerodynamic quirks of the mid-engined plane were unimportant. In the Far East, P-63 and P-39 aircraft were used in "August Storm," the Soviet invasion of Manchukoku and northern Korea, where a Soviet P-63A downed a Japanese fighter aircraft, an Army Nakajima fighter, Ki-43, Ki-44 or Ki-84, off the coast of North Korea. Sufficient aircraft continued in use after the war for them to be given the NATO reporting name of Fred. Some American pilots also reported seeing P-63s in service with North Korea during the Korean war.[citation needed]

During World War II, 114 later models were delivered to the Free French, but they arrived too late to see service in the war. They were, however, kept on in the postwar Armée de l'Air and saw service in French Indochina before being replaced in 1951.

Its main use in American service was the unusual one of a manned flying target for gunnery practice. The aircraft was generally painted bright orange to increase its visibility. All armament and the regular armor was removed from these RP-63 aircraft, and over a ton of armored sheet metal was applied to the aircraft. This was fitted with sensors that would detect hits, and these hits were signalled by illuminating a light in the propeller hub where the cannon would have been. This earned the aircraft the unofficial nickname of Pinball. Special frangible rounds made of a lead/graphite combination were developed that would disintegrate upon impact.

Numerous surplus P-63s ended up on the air racing circuit in the immediate postwar era.

Charles Tucker purchased two P-63s from the disposal facility at Kingman, Arizona just after the war. He entered one of them, the Tucker Special as Race 28 with the name Flying Red Horse emblazoned on the nose (civilian register N62995) in the 1946 Thompson Trophy race. He had clipped the wing in an attempt to improve its speed, reducing the span to 25 feet, 9 inches. The second one (44-4126 (XN63231) was intended for the 1946 Bendix cross country race. It was initially fitted with two wingtip drop tanks. In 1947, the drop tanks were removed and the wings were clipped to 28 feet 6 inches.

Several P-63s are on display in museums around the world. A handful are still flown as warbirds.

One RP-63G "Pinball" is currently at the National Museum of the United States Air Force near Dayton, Ohio. The aircraft is displayed in the museum's WWII hangar in its authentic bright orange paint scheme.