The Bell X-1 (originally XS-1) was a joint NACA-U.S. Army Air Forces/US Air Force supersonic research project and the first aircraft to exceed the speed of sound in controlled, level flight. It was the first of the so-called X-planes, an American series of experimental aircraft designated for testing of new technologies and usually kept highly secret.

File:Chuck Yeager.jpg
Chuck Yeager in front of the X-1, which he named Glamorous Glennis after his wife.
File:XLR-11.jpg
XLR-11 rocket engine

The X-1 was in principle a "bullet with wings" closely resembling a Browning .50 (12.7mm) machine gun bullet (known to be stable in supersonic flight).[2] The aircraft was modified to feature an all-moving tailplane that allowed it to pass through the sound barrier safely. The pattern shape was followed to the point of removing a canopy. Instead, the pilot sat behind a sloped, framed window inside a confined cockpit in the nose. To modern eyes, the X-1 has a markedly stubby look, but in 1947 the diminutive airframe represented state-of-the-art in streamlining. It was only 31 feet (9.5 m) long with a 28-foot (8.5 m) wingspan.

Bell Aircraft Chief Test Pilot Jack Woolams became the first to fly the XS-1, in a glide flight over Pinecastle Army Airfield, in Florida, on 25 January, 1946. Woolams would complete nine additional unpowered trials over Pinecastle before March 1946, when aircraft #1 was returned to Bell for modifications in anticipation of the powered trials, planned to take place at Muroc Army Air Field (now Edwards Air Force Base) in California.[3] Following Woolams' death on 30 August, 1946, Chalmers "Slick" Goodlin was the primary Bell test pilot of X-1-1. He made 26 successful flights in both of the X-1 aircraft from September 1946 until June 1947.

The Army Air Force was unhappy with the cautious pace of flight envelope expansion. Bell's flight test contract for aircraft #46-062 was terminated and was taken over by the Army Air Force Flight Test Division on 24 June after months of negotiation. Goodlin had demanded a US$150,000 bonus for breaking the sound barrier.[4][5][6] Flight tests of the X-1-2 (serial number 46-063) would be conducted by NACA to provide design data for later production high-performance aircraft.

On 14 October 1947, just under a month after the United States Air Force had been created as a separate service, the tests culminated in the first manned supersonic flight, piloted by Air Force Captain Charles E. "Chuck" Yeager in aircraft #46-062, which he had christened ‘Glamorous Glennis’, after his wife. The rocket-powered aircraft was launched from the belly of a specially modified B-29 and glided to a landing on a runway. XS-1 flight number 50 is the first one where the X-1 recorded supersonic flight, at Mach 1.06 (361 m/s, 1,299 km/h, 807.2 mph) peak speed; however, Yeager and many other personnel believe Flight #49 (also with Yeager piloting), which reached a top recorded speed of Mach 0.997 (339 m/s, 1,221 km/h), may have in fact exceeded Mach 1. (The measurements were not accurate to three significant figures and no sonic boom was recorded for that flight.)

As a result of the X-1's initial supersonic flight, the National Aeronautics Association voted its 1948 Collier Trophy to be shared by the three main participants in the program. Honored at the White House by President Harry S. Truman were Larry Bell for Bell Aircraft, Captain Yeager for piloting the flights and John Stack of NACA for the NACA contributions.

The research techniques used in the X-1 program became the pattern for all subsequent X-craft projects. The NACA X-1 procedures and personnel also helped lay the foundation of America's space program in the 1960s. The X-1 project defined and solidified the post-war cooperative union between U.S. military needs, industrial capabilities, and research facilities. The flight data collected by the NACA in the X-1 tests then provided a basis for American aviation supremacy in the latter half of the 20th century.

Later variants of the X-1 were built to test different aspects of supersonic flight; one of these, the X-1A, with Yeager at the controls, inadvertently demonstrated a very dangerous characteristic of fast (Mach 2-plus) supersonic flight: inertia coupling. Only Yeager's skills as an aviator prevented him from dying that day; later Mel Apt would die testing the Bell X-2 under similar circumstances. 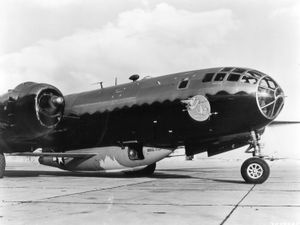 Bell X-1A in the belly of the B-29 mothership

Ordered by the Air Force on 2 April, 1948, the X-1A (serial 48-1384) was intended to investigate aerodynamic phenomena at speeds above Mach 2 (681 m/s, 2,451 km/h) and altitudes greater than 90,000 feet (27 km), specifically focusing on dynamic stability and air loads. Longer and heavier than the original X-1 with a bubble canopy for better vision, the X-1A was powered by the same Reaction Motors XLR-11 rocket engine. The aircraft first flew, unpowered, on 14 February, 1953 at Edwards AFB, with the first powered flight on 21 February. Both flights were piloted by Bell test pilot Jean Ziegler. The aircraft was transferred to NACA in September 1954. Following modifications, including the installation of an ejection seat, the aircraft was lost on 8 August 1955 while being prepared for launch from the |RB-50 mothership.[1]

The X-1B was equipped with aerodynamic heating instrumentation for thermal research (over 300 thermal probes were installed on its surface). It was similar to the X-1A except for having a slightly different wing. The X-1B was used for high speed research by the US Air Force starting from October 1954 prior to being turned over to the NACA in January 1955. NACA continued to fly the aircraft until January 1958 when cracks in the fuel tanks forced its grounding. The X-1B completed a total of 27 flights and achieved a maximum speed of Mach 2.44 (830 m/s, 2,989 km/h). A notable achievement was the installation of a system of small reaction rockets used for directional control, making the X-1B the first aircraft to fly with this sophisticated control system, later used in the X-15. The X-1B is now on display at the National Museum of the United States Air Force, Wright-Patterson Air Force Base at Dayton, Ohio.

The X-1C was intended to test armaments and munitions in the high transonic and supersonic flight regimes. It was canceled while still in the mock-up stage, as the birth of transonic and supersonic-capable aircraft like the North American F-86 Sabre and the North American F-100 Super Sabre eliminated the need for a dedicated experimental test platform.[7]

Aircraft number #48-1386 was the first of the second generation of supersonic rocket planes. Flown from an EB-50A (s/n #46-006), it was to be used for heat transfer research. The X-1D was equipped with a new low-pressure fuel system and a slightly increased fuel capacity. There was also some minor changes to the avionics set.

On 24 July, with Bell test pilot Jean Ziegler at the controls, the X-1D was launched over Rogers Dry Lake on what was to become the only successful flight of its career. The unpowered glide was completed after a nine-minute descent, but upon landing, the nose gear failed and the aircraft slid ungracefully to a stop. Repairs took several weeks to complete and a second flight was scheduled for mid-August. The X-1D was lost in a fuel explosion during preparations for the first powered flight.

File:X-1.jpg
X-1 at the Smithsonian

Aircraft #46-062 is currently on display in the Milestones of Flight gallery of the National Air and Space Museum in Washington, DC, alongside the Spirit of St. Louis and SpaceShipOne. Aircraft #46-063, now the X-1E, is on display in front of the Dryden Flight Research Center headquarters building. Aircraft #46-064 was destroyed 9 November 1951 in a ground fire following a captive flight test, after completing only a single glide flight on 20 July.[1]