From PlaneSpottingWorld, for aviation fans everywhere
Jump to:navigation, search
This article is about the first T-6 Texan. For the newer Beech aircraft, see T-6 Texan II.

The T-6 Texan was a single-engine advanced trainer aircraft designed by North American Aviation, used to train fighter pilots of the United States Army Air Forces, United States Navy, Royal Air Force and other air forces of the British Commonwealth during World War II. The T-6 is known by a variety of designations depending on the model and operating air force. The USAAC called it the "AT-6", the US Navy, the "SNJ", and the Commonwealth air forces, the Harvard. It remains a popular warbird aircraft.

The T-6 originated from the North American NA-16 prototype (first flown on April 1, 1935) which, modified as the NA-26, was submitted as an entry for a USAAC "Basic Combat" aircraft competition in March, 1937. The first model went in to production and 180 were supplied to the USAAC as the BC-1 and 400 to the RAF as the Harvard I. The US Navy received 16 modified aircraft, designated the SNJ-1, and a further 61 as the SNJ-2 with a different engine.

A further 92 BC-1A and three BC-2 aircraft were built before the shift to the "advanced trainer" designation, AT-6, which was equivalent to the BC-1A. The differences between the AT-6 and the BC-1 were new squared-off wingtips and a straight-edged rudder, producing the definitive Texan appearance. The AT-6 was designated the Harvard II for RAF/RCAF orders and 1,173 were supplied by purchase or Lend Lease, mostly operating in Canada as part of the Empire Air Training Scheme. 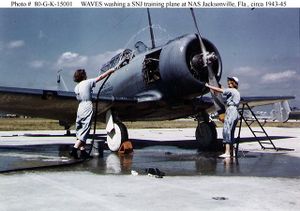 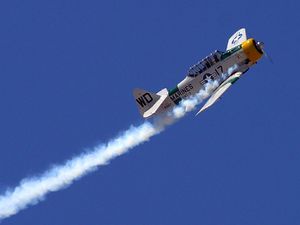 Next came the AT-6A which was based on the NA-77 design and was powered by the Pratt & Whitney R-1340-49 Wasp radial engine. The USAAF received 1,549 and the US Navy 270 (as the SNJ-3). The AT-6B was built for gunnery training and could mount a .30 in machine gun on the forward fuselage. It utilised the R-1340-AN-1 engine which was to become the standard for the remaining T-6 production. Canada's Noorduyn Aviation built a R-1340-AN-1 powered version of the AT-6A which was supplied to the USAAF as the AT-16 (1,500 aircraft) and the RAF/RCAF as the Harvard IIB (2,485 aircraft), some of which also served with the Fleet Air Arm.

The T-6 Texan formed the basis for the Australian Commonwealth Aircraft Corporation Wirraway, of which 755 were built between 1939 and 1946. 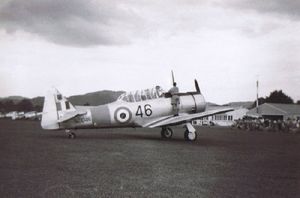 During the Korean War and to a lesser extent, the Vietnam war, T-6's were pressed into service as forward air control aircraft. These aircraft were designated T-6 "Mosquito"s [1]. The RAF used the Harvard in Kenya against the Mau Mau in the 1950s where they operated with 20 lb bombs and machine guns against the gangs. Some operations took place at altitudes around 20,000 ft asl. Many small countries used the T-6 in a light attack or counter insurgency role until the 1970s.

Since the Second World War, the T-6 has been a regular participant at air shows, and was used in many movies. For example, in Tora! Tora! Tora! and The Final Countdown, converted single-seat T-6s painted in Japanese markings represent Mitsubishi Zeroes. The New Zealand Warbirds "Roaring 40s" aerobatic team use ex-Royal New Zealand Air Force Harvards. 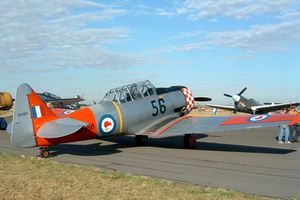 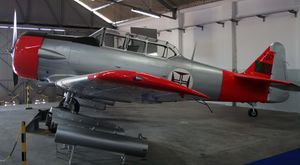 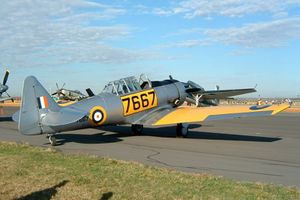 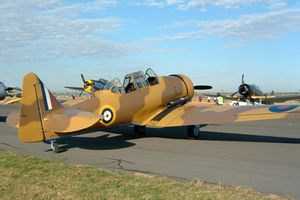