The F-5A/B Freedom Fighter, and F-5E/F Tiger II are part of a family of widely used light supersonic fighter aircraft, designed and built by Northrop in the United States, beginning in 1960s. Hundreds remain in service in Air Forces around the world as of the early 21st century, and the type formed the basis for a number of other aircraft. Production ended in 1972 and 1987 for the F-5A and F-5E families respectively.

The aircraft family started as a privately funded light fighter by Northrop in the 1950s. The first generation F-5 Freedom fighter entered service in the 1960s. Over 800 were produced through 1972 for U.S. Allies during the Cold War, while the USAF procured about 1100 of the same basic airframe as the T-38 Talon.

The much improved second generation F-5E Tiger II family was again primarily used by U.S. Cold War allies and in the US as training and aggressor aircraft; the Tiger II family production amounted to 1400 with production ending in 1987. Many F-5 that continue in service into the 1990s and 2000s have undergone a wide variety of upgrade programs. The major variant sub-family of the F-5 fighters were various dedicated recon versions RF-5 Tigereye.

Originally designed by Northrop (designated N-156) as a low-cost, low-maintenance fighter, there was little market for such a craft. The U.S. Army expressed interest in it for ground support, but operating fixed-wing aircraft was a task largely taken over by the U.S. Air Force. The Air Force would neither agree to operate the N-156 nor to allow the Army to operate fixed-wing combat aircraft (a situation repeated with the C-7 Caribou).

The F-5 proved to be a successful combat aircraft that never entered front-line service with the US due to diverging priorities of the US services. The USAF did adopt the T-38 Talon trainer version of the airframe as the world's first supersonic trainer. 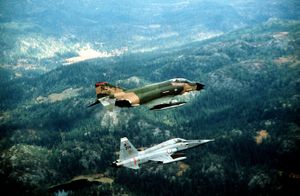 When the Military Assistance Program under the Kennedy Administration needed a low cost fighter for distribution to less-developed nations, the N-156F was at the top of the pile, and subsequently became the F-5A. It was named under the 1962 United States Tri-Service aircraft designation system which included a re-set of the fighter number series (the General Dynamics F-111 was the highest sequentially numbered P/F- aircraft to enter service under the old number sequence).

The first contract for the production F-5A was issued in 1962, the first overseas order coming from the Royal Norwegian Air Force in February 1964. 636 F-5As were built before production ended in 1972. These were accompanied by 200 two-seat F-5B aircraft. These were operational trainers, lacking the nose-mounted cannon but otherwise combat-capable.

The USAF made a combat evaluation of the F-5A under the Skoshi Tiger ("skoshi" is derived from the Japanese word sukoshi, meaning "little," thus the program was "Little Tiger") program in 1965. 12 aircraft were delivered for trials to the 4503rd Tactical Fighter Wing (subsequently the 10th Fighter Commando Squadron), redesignated F-5C. They performed combat duty in Vietnam, flying more than 3,500 sorties from the 3rd Tactical Fighter Wing at Bien Hoa in South Vietnam. Two aircraft were lost in combat. The program was short-lived, more a political gesture than a serious consideration of the type for U.S. service. It may be noted that the double-sonic F-104 Starfighter and the sophisticated F-102 Delta Dagger were also tried, but completely withdrawn from Vietnam.

Following the operational success of Skoshi Tiger, the Philippine Air Force purchased the F-5 in 1965, putting 23 of them into service and becoming the first Southeast Asian country with supersonic fighters in inventory.

The 10th FCS's surviving aircraft were subsequently turned over to the air force of South Vietnam, which previously had only slow A-1 Skyraider and A-37 Dragonfly attack aircraft. The president of Vietnam asked for the F-4 Phantoms used by the Americans, but the VNAF flew primarily ground support as the communist forces employed no opposing aircraft over South Vietnam, MiG or otherwise. Ironically, when Bien Hoa was later overrun by Communist forces, several of the aircraft were captured and used operationally by the NVAF, in particular against Khmer Rouge. In view of the performance, agility and size of the F-5, it might have appeared to be a good match against the similar MiG-21 in air combat, however US doctrine was to use heavy, faster, and longer range aircraft over North Vietnam like the F-105 Thunderchief and F-4. Several of the F-5s left-over from the Vietnam war were sent to Poland and Russia, for advanced study of US aviation technology,[citation needed] while others were decommissioned and put on display at museums in Vietnam.

Very few surplus F-5As and F-5Es have been sold to private owners. 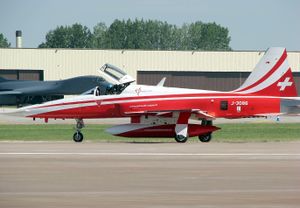 In 1970 Northrop won a competition for an improved International Fighter Aircraft (IFA) to replace the F-5A. The resultant aircraft, initially known as F-5A-21, subsequently became the F-5E. It was lengthened and enlarged, with increased wing area with and more sophisticated avionics, initially with an Emerson AN/APQ-153 radar (the F-5A and -B had no radar). Various specific avionics fits could be accommodated at customer request. A two-seat combat-capable trainer, the F-5F, was offered. Unlike the gunless F-5B, it retained a single M39 cannon in the nose, albeit with a reduced ammunition capacity. The F-5F was armed with Emerson AN/APQ-157 radar, which is a derivative of the AN/APQ-153 radar, with dual control and display systems to accommodate the two-men crew, and the radar has the same range of AN/APQ-153, around 10 nm. A reconnaissance version, the RF-5E Tigereye, with a sensor package in the nose displacing the radar and one cannon, was also offered. The latest radar upgrade included the Emerson AN/APG-69, which was the successor of AN/APQ-159, incorporating mapping capability, however, most nations chose not to upgrade due to financial reasons, and the radar only saw very limited service in USAF aggressor squadrons and Swiss air force.

The F-5E eventually received the official popular name Tiger II. F-5E experienced numerous upgrades in its service life, with the most significant one being adopting a new planar array radar, Emerson AN/APQ-159 with a range of 20 nm to replace the original AN/APQ-153. Similar radar upgrades were also proposed for F-5F, with the derivative of AN/APQ-159, the AN/APQ-162, to replace the AN/APQ-157, but was never carried out. Instead, the AN/APQ-162 was used on Cessna T-47 to train radar officers. 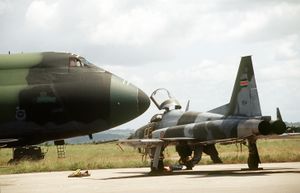 Northrop built 792 F-5Es, 140 F-5Fs and 12 RF-5Es. More were built under license overseas: 56 F-5Es and -Fs plus 5 RF-5Es in Malaysia (they plan to sell them after being upgraded), 90 F-5Es and -Fs in Switzerland (of which some are currently rented to Austria to bridge the gap between the retirement of the Saab Draken fleet and the delivery of new Eurofighter jets), 68 in South Korea, and 380 in Taiwan.

Various F-5 versions remain in service with many nations. The most advanced are those of Singapore, which has approximately 49 modernized and re-designated F-5S (single-seaters) and F-5T (two-seaters) aircraft. Upgrades include new radar, manufactured by Israel, updated cockpits with multi-function displays, and compatibility with the Rafael Python and AIM-120 AMRAAM air-to-air missiles. Similar programs have been carried out in Chile (with Israeli assistance) and Brazil, the former being called the F-5E Tiger III, armed with Python III and 4 (with Dash helmet-mounted cue system) and new radar, cockpit displays, and electronics, and the latter being called the F-5 Plus, with Griffon radars and other improvements. It is believed that the Chilean Air Force F-5E also carry the Israeli Derby medium range missile, proving the aircraft with BVR capability.

One NASA F-5E was given a modified fuselage shape for the Shaped Sonic Boom Demonstration program. 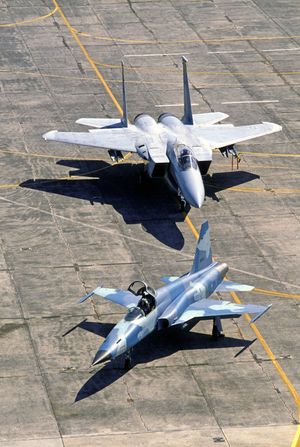 Although the United States does not use the F-5 in a front-line role, it was adopted for an opposing-forces (OPFOR) "aggressor" for dissimilar training role because of its small size and performance similarities to the Soviet MiG-21. A small target is much more difficult to see than an aircraft as large as an F-14 Tomcat or F-15 Eagle. The "MiG-28s" seen in Top Gun were, in fact, black-painted F-5s. 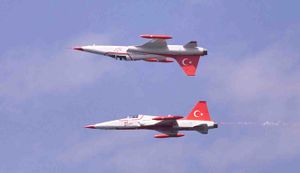 The F-5 also formed the starting point for a series of design revisions. Starting from the F-5E, Northrop developed the N-300, and later, the P530 designs incorporating leading-edge root extensions (LERX), a larger fuselage and wings, and more powerful engines. The eventual result was the YF-17 Cobra, a competitor in the U.S. Air Force's Light Weight Fighter program, and basis for the F/A-18 Hornet fighter.

The F-5 has long been regarded as an entry level fighter that was not suitable to front-line use by the US armed forces. Northrop attempted to develop an advanced version of the F-5E, originally designated F-5G, as an export competitor for the F-16 Fighting Falcon. The F-5G was later redesignated the F-20 Tigershark. It got good reviews as a less expensive but capable alternative to early-block variants of the F-16 (and superior to the similarly never-purchased export variant F-16/79), but it never had the appeal of the much newer fighter design even at a lower cost. 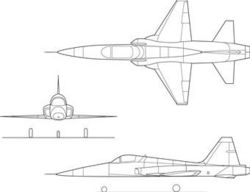 Data from Quest for Performance[2]