EADS-CASA, previously Construcciones Aeronáuticas SA (CASA), was a Spanish aircraft manufacturer. It became the Spanish branch of EADS, the (European Aeronautic Defence and Space Company [NV]), in 1999, but was absorbed by Airbus Military in 2009. CASA produced numerous landmark military transport aircraft designs such as the CASA C-212 Aviocar, the CASA C-295 and the CASA C-101 trainer/ground attack aircraft.

Construcciones Aeronáuticas SA (CASA) was founded by Jose Ortiz Echagüe in 1923 and began work on a factory in Getafe in May 1924, building Breguet aircraft under license. The first order covered 26 19 A.2s; total production of this type eventually reached 400 units.

CASA built a second factory in Cadiz in 1926 to construct a licensed copy of the German Dornier Do. J Wal seaplane. They built 17 aircraft for the Spanish Air Force, 12 for the Naval Aviation branch of the Spanish Navy and two for commercial use. CASA also operated several branch facilities in Spain for the repair and overhaul of aircraft. In 1929 the CASA-1 flew - the first CASA designed aircraft. King Alfonso XIII visited the main factory in 1930. CASA also built the French Breguet XIX, two of which would be made especially famous. One, was the Breguet XIX GR (Grand Raid) named the Jesus del Gran Poder, currently preserved in the Museo del Aire de Cuatro Vientos (Madrid), which flew between Seville and Bahia, (in Brazil), in 1929. This aircraft was piloted by Captains Ignacio Jiménez and Francisco Iglesias and covered 6746 km in 43 hours 50 minutes. The other was the Breguet XIX Super Bidon, named the Four Winds; it was flown by Mariano Barberan and Collar Joaquin Serra to Havana in Cuba in 1933. In 1932 CASA obtained a license from the UK aircraft company, Vickers, to build 25 Vickers Vildebeest land-based torpedo bombers, which were powered by French Hispano 600 hp engines.

File:CASA- Heinkel He111.jpg
CASA 2.111 a licensed production version of the He-111-H Bomber, re-engined in Spain with imported Rolls-Royce Merlins at the end of World War II. CASA built 236 of this aircraft between 1940 and 1956

During the Spanish Civil War the CASA Getafe factory was located in the Republican zone. It was moved to Alicante, another opened in Sabadell. At the end of the war production returned to Getafe. CASA manufactured the Russian Polikarpov I-15 biplane fighter, producing 287 aircraft before the end of the civil war.

After the war, CASA opened a new plant in Tablada in Seville, after obtaining various aircraft licenses from Germany and built 25 Gotha Go 145A as the CASA 1145, 25 Bücker Bü 133 Jungmeister as the CASA 1133 and 555 Bücker Bü 131 Jungmann as the CASA 1131. Production of these aircraft continued until the late 1950s. The CASA 201, a twin engine transport, (its engines were the Spanish-made ENMASA VAT Tigre G-125). In 1940 CASA began the licensed manufacture of 200 Heinkel He 111 twin engine bombers with imported Rolls Royce Merlins, as the CASA 2111. (These are the aircraft that were used as World War Two German Luftwaffe He-111s in various movies such as "The Battle of Britain" and "Patton".)

Starting in 1943, the Spanish government began investing in CASA, first obtaining a 33 per cent share of the company, by 1992 this had increased to a controlling 99.2 per cent. In 1945 CASA opened a factory in Madrid dedicated to manufacturing the parts and sub-assemblies of their various aircraft and those that they had contracts to repair and overhaul. In 1946 CASA re-established the Projects Office and resumed the design of aircraft based on the firm's proprietary technology. In 1957 CASA won a contract from the United States Air Force for the maintenance of the F-100 Super Sabres based in Europe and Turkey and a contract from the Spanish Air Force to overhaul T-33s in the Spanish Air Force. They began the manufacture of the Northrop F-5A fighter-bomber under license in 1962. In 1971 CASA merged with the other large Spanish aerospace firm Hispano, SA.
Spain and CASA became one of the original members of the Airbus Consortium with France, Germany and the United Kingdom in 1972. In 1977 CASA was awarded the contract to design and build the C-101, a trainer and attack aircraft for the Spanish Air Force. CASA joined the Eurofighter 2000 project in 1996. The EADS-CASA plant in Seville was designated by Airbus as the assembly plant for the future A400M heavy transport in 2008. After many delays and threats of cancellation, the first flight of the A400M took place on 11 December 2009.

CASA has been a part of EADS, the European aerospace corporation, with Aérospatiale-Matra of France, Dornier GmbH and DASA of Germany since 1999. From then, the Spanish branch of EADS is called EADS-CASA. The current CEO and Chairman of EADS-CASA is Domingo Ureña-Raso.[1] EADS-CASA currently employs around 7,500 workers.

In July 2001 EADS-CASA Military Aircraft marked the beginning of the Eurofighter Typhoon Final Assembly Phase at Getafe.[2] It is one of four assembly lines for the Eurofighter (the other three are at Warton in the United Kingdom, Manching in Germany and Turin in Italy). Production was expected to be up to seven Typhoon wings per month and 12 aircraft per year. EADS CASA is producing the right wing for the Eurofighter and assembling 87 aircraft for the Spanish Air Force. First delivery was realized together with the other partner air forces in the second half of 2002.

EADS was formed in July, 2000 following the merger of Aerospatiale Matra of France, DaimlerChrysler from Germany and Construcciones Aeronáuticas S.A. from Spain. It is the third largest aerospace company in the world with approximately 100,000 employees.

File:Airbus A400M Rollout.JPG
The first A400M, surrounded by EADS employees, during the aircraft's roll-out in Seville on 26 June 2008

MTAD is part of EADS-CASA and is based in Madrid. One of the planes they produce is the Airbus A330-200, which has been modified to provide air to air refuelling. They have provided one variant to the Australian air force and another to the UK's Royal Air Force via the AirTanker company. MTAD's main focus is in the light to medium end of the military transport market covering three to nine tonnes. It has over 700 C-212s, C-235s and C-295s flying.

EADS CASA’s Military Transport Aircraft Division managed the industrial and technical activities of participating companies for the A400M project. This responsibility is now managed by Airbus Military.[3] As a result, current EADS-CASA aircraft are shown as being produced by Airbus on the Airbus Military website.

A400M assembly at the Seville EADS-CASA plant began in early 2007. Airbus plans to manufacture thirty aircraft per year. The major assemblies arrive by Beluga transporters. The four EuroProp TP400-D6 flight test engines were delivered in late February 2008 for the first A400M. According to EADS the first "static tests" of a dedicated A400M complete structure were started on 14 March in Spain. 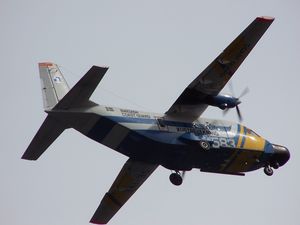