The Northrop Grumman B-2 Spirit is a multi-role stealth bomber able to drop conventional and nuclear weapons. The bomber was a milestone in the bomber modernization program of the United States.

The B-2 is one of the most expensive planes ever built: estimates for the costs per plane range from 1.157 billion [1] to 2.2 billion US dollars.[2] By comparison, a Nimitz class aircraft carrier costs $4.5 billion. However, quoted cost figures are highly inflated by the inclusion of the aircraft's enormous development cost and infrastructure development costs in the unit price; published estimates have shown the unit "production" cost for the aircraft alone is approximately $150 million per aircraft.

Its stealth technology is intended to help the craft penetrate defenses previously impenetrable by combat aircraft. The original procurement of 135 aircraft was later reduced to 75 in the late 1980s. In his 1992 State of the Union address, President George H. W. Bush announced total B-2 production would be limited to 20 aircraft (later increased to 21 by refurbishing a test aircraft).

This Spirit was photographed in 2004 at Andersen Air Force Base, Guam.

With the B-52 Stratofortress and B-1 Lancer, the U.S. military claims that the B-2 provides the versatility inherent in manned bombers. Its low-observable, or "stealth," characteristics give it the ability to penetrate an enemy's most sophisticated defenses and attack its most heavily defended targets.

The blending of low-observable technologies with high aerodynamic efficiency and large payload gives the B-2 significant advantages over previous bombers. Its traveling range is approximately 6,000 nautical miles (11,100 km) without refueling. Also, its low-observation ability provides the B-2 greater freedom of action at high altitudes, thus increasing its range and a better field of view for the aircraft's sensors. With its GPS Aided Targeting System (GATS) combined with GPS-aided bombs such as Joint Direct Attack Munition (JDAM), it can use its passive electronically scanned array APQ-181 radar to correct GPS errors of targets and gain much better than laser-guided weapon accuracy with "dumb" gravity bombs with a GPS-aided "smart" guidance tail kit attached. It can bomb 16 targets in a single pass when equipped with 1000 or 2000-pound bombs, or as many as 80 when carrying 500-pound bombs.

The B-2's stealth comes from a combination of reduced acoustic, infrared, visual and radar signatures, making it difficult for defences to detect, track and engage. Many aspects of the low-observability process remain classified; however, the B-2's composite materials, special coatings and flying wing design contribute to its stealth abilities.

The B-2 has a crew of two; a pilot in the left seat and mission commander in the right, compared to the B-1B's crew of four and the B-52's crew of five. 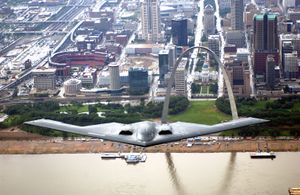 B-2 in flight over the Mississippi River. St. Louis, Missouri with the Gateway Arch and Busch Stadium in the background.

The B-2 started life as a black project known as the High Altitude Penetrating Bomber (HAPB), then became the Advanced Technology Bomber (ATB) and used the project code word Senior Cejay. It later became the B-2 Spirit. An estimated 23 billion US dollars were secretly spent for research and development on the B-2 in the 1980s. An additional expense was caused by changing its role in 1985 from a high-altitude bomber to a low-altitude bomber, which required a major redesign. The first B-2 was publicly displayed on November 22 1988, when it was rolled out of its hangar at Air Force Plant 42, Palmdale, California, where it was built. Its first flight was on July 17 1989. The B-2 Combined Test Force, Air Force Flight Test Center, Edwards Air Force Base, California, is responsible for flight testing the engineering, manufacturing and development aircraft.

The first aircraft, named Spirit of Missouri, was delivered on December 17 1993. Depot maintenance responsibility for the B-2 is held by United States Air Force contractor support and is managed at the Oklahoma City Air Logistics Center at Tinker Air Force Base in Oklahoma. 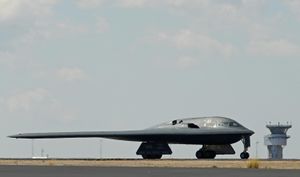 Whiteman Air Force Base in Missouri was the B-2's only operational base until early 2003, when facilities for the B-2 were built on the joint U.S./U.K. military base on the British island of Diego Garcia in the Indian Ocean, followed by deployment to Guam in 2005. Facilities for the aircraft have also been built at RAF Fairford in Gloucestershire in the United Kingdom.

Questions remain over the rising cost of the program: some writers have suggested that the huge cost may include costs for other black projects. The expense may also be partially explained by the small number of planes produced coupled with a large research overhead in the B-2 program.[4]

These bombers were originally designed to drop nuclear weapons during the Cold War and support for them dwindled as military spending declined. In May of 1995, in a study commissioned by Congress, the Institute For Defense Analysis concluded that after the demise of the Soviet Union, there was no need for more B-2s. 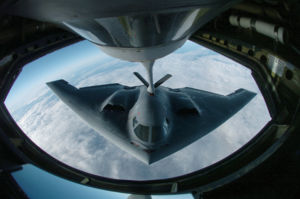 B-2 during aerial refueling over the Pacific Ocean. Inflight refueling capability gives the B-2 a range limited only by engine lubrication and crew endurance.

The B-2 was derided by many as being too expensive to risk in combat. However, the aircraft has seen service in three separate campaigns.

Its debut was during the Kosovo War in 1999. The B-2 first introduced the satellite guided JDAM in combat use. Since then, the aircraft has operated over Afghanistan in Operation Enduring Freedom and Iraq in Operation Iraqi Freedom.

Later missions to Iraq came from Whiteman AFB in Missouri. This resulted in missions lasting over 30 hours and one mission of over 50 hours. The B-2 is highly automated, and unlike single-seat fighters, one crewmember can sleep, use a flush toilet or prepare a hot meal while the other monitors the aircraft.

The Pentagon's Operational Test and Evaluation 2003 Annual Report noted that the B-2's serviceability for FY03 was still inadequate, mainly due to maintenance on the B-2's Low Observable materials, the Evaluation also noted that the Defensive Avionics suite also had shortcomings in warning of pop-up threats[5]. Despite these problems the B-2 was declared to be in full operational capability in December of 2003[6]. The B-2 maintained high serviceability for Operation Iraqi Freedom, dropping 583 JDAMs during the war.[7] 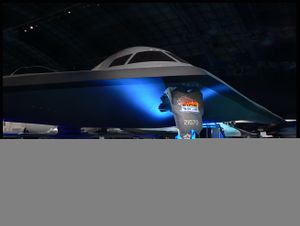 Because of their cost, rarity and combat value it is unlikely any B-2 will be placed on permanent display in the near future (or anytime before airframe retirement). However, they are periodically on temporary ground display at various airshows, including one at Tinker Air Force Base, Midwest City, Oklahoma in June of 2005. In 2004 the static test mock-up for the B-2 was placed on display at the National Museum of the United States Air Force near Dayton, Ohio. The mock-up had been used for structural testing, and at one point was tested to the point of destruction. The Museum's restoration team spent over a year reassembling the fractured airframe, and patches can clearly be seen on the exterior of the airframe where fractured sections have been reattached.

From 1989 to 2004, the South Dakota Air and Space Museum located on the grounds of Ellsworth Air Force Base displayed a 10-ton, 3/5 scale "Honda Stealth," a mock-up of a stealth bomber built by North American Honda in 1988 for a national automobile campaign. The mockup is not an actual replica of a B-2, but was close enough to create a stir that Honda had cracked national security, as the B-2 project was still officially classified in 1988.[8] Honda donated the model to the Museum in 1989, with the stipulation the model be destroyed if it was replaced with a different aircraft. The Honda Stealth was dismantled and replaced with a B-1 Lancer aircraft in 2005.[9][10]

A B-2 Spirit participated in the Air Force Memorial dedication ceremony on October 14, 2006.

Recent Events regarding B-2

Noshir Gowadia, the design engineer in charge of the propulsion system was arrested on October 2005 for selling classified information to China, and possibly other countries as well. Trial is scheduled for 10 July 2007.[11]

Units using the B-2 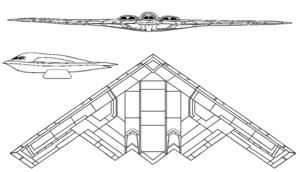 Later avionics and equipment improvements allow B-2A to carry JSOW and GBU-28s as well. The Spirit is also designated as a delivery aircraft for the AGM-158 JASSM when the missile enters service. 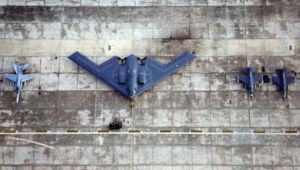