From PlaneSpottingWorld, for aviation fans everywhere
Jump to:navigation, search
This article or section does not adequately cite its references or sources.
Please help improve this article by adding citations to reliable sources. (help, get involved!)
This article has been tagged since December 2006.

The Northrop YB-49 was a prototype jet-powered flying wing heavy bomber aircraft developed by Northrop for the United States Air Force shortly after World War II. It was a development of the piston-engined YB-35, and the two YB-49s actually built were both converted YB-35 test aircraft. The aircraft was never to enter production, however, being passed over in favor of the more conventional Convair B-36 in service.

With the B-35 program seriously behind schedule by 1944, and the end of the piston-engined warplane in sight, the production contract for the type was canceled in May. Nevertheless, the design was still sufficiently interesting to the Air Force that work on the pre-production aircraft was ordered to continue for testing purposes. Amongst the aircraft to be completed were two that the Air Force required to be fitted with jet propulsion.

The design was influenced by the German Horten Ho 229, a jet-powered flying wing fighter/bomber. One of those planes was secured towards the end of the war and sent to Northrop for evaluation.

The first aircraft flew on October 1, 1947 and immediately proved more promising than its piston-engined counterpart. The YB-49 set both an unofficial endurance record of staying continually above 40,000 ft (12,200 m) for six hours, and a trans-continental speed record, flying from Muroc Air Force Base in California to Andrews Air Force Base near Washington, D.C. in 4 hours 20 minutes. The program nevertheless experienced a number of serious setbacks, not least of which was a disastrous crash of one of the prototypes, killing its pilot, Captain Glen Edwards (after whom Edwards Air Force Base is named), Major Daniel Forbes and three other crew. The aircraft was probably stalled at dangerously low altitude, and broke up when excessive forces were generated in the recovery attempt.

In September 1948, the Air Force ordered the type into production as the RB-49A reconnaissance aircraft. This was soon cancelled. There may have been some political considerations, but it was clear other aircraft could handle the job, including the upcoming B-52.

Aerodynamics experts have recently proposed the theory that the instability of the YB-49 was due to the fact that it was adapted from the YB-35 without taking into account the need to redesign the wing completely after the removal of the propellers. They note that the propeller equipped YB-35 did not have instability problems, since the spinning propellers acted as discs in the airflow and gave an important stabilizing surface, which was absent with the jet engines. Because of poor yaw damping, the bombardier on a test bombing run threw up. Northrop was working on a stability augmentation system but the program ran out of time.

Testing of the one remaining YB-35 prototype ended in 1948, with the aircraft demonstrating many problems as a bombing platform and also suffering a major engine-bay fire. On March 15, 1950, the program was cancelled completely, and coincidentally, the prototype suffered an accident while taxiing and was totally destroyed in the fire that ensued. The prototype reconnaissance platform, the YRB-49A flew into 1950. Upon cancellation of the program, all surviving airframes were ordered destroyed.

There is a long-standing conspiracy theory about the cancellation of the B-35 and B-49 program. Specifically, it is alleged that Air Force Secretary Stuart Symington attempted to coerce Jack Northrop to merge his company with the Atlas Convair concern, which had used Texas Congressional political connections to get orders to build the B-36 bomber in Texas. It is further suggested that when Northrop refused, Symington arranged the cancellation of the aircraft. All the remaining aircraft were destroyed by an Air Force squadron with chain saws to eliminate the evidence of the YB-49's performance relative to the B-36, and the Air Force accelerated the B-47 program at Boeing to compensate for their inability to use the B-36 in combat.

This interpretation was further reinforced when Jack Northrop made these accusations directly in a television interview recorded in 1979. Northrop also claimed to have covered for Symington, lying under oath during a congressional hearing into Convair's contract award in 1949 because he was fearful of reprisals had he told the truth. Symington consistently claimed that there was nothing in these allegations.

Critics of the conspiracy theory point out that not only did the YB-49 have a series of well-documented major problems, but was incapable of carrying the nuclear weapons that the B-36 could, though it was 100 mph faster and had longer range. The B-45 and B-47 were becoming available, and after 1948, the B-52 was in the works. Boeing had demonstrated the capability of handling big complex projects. They also point out that at the same time that the B-49 was being cancelled, Northrop successfully tendered for a production contract for the F-89 Scorpion interceptor. 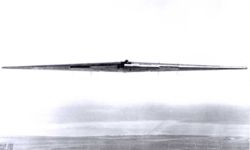 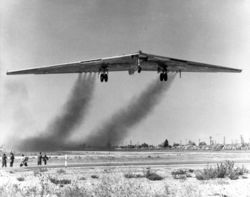