The Boeing KC-135 Stratotanker is an aerial refueling tanker aircraft, first entered service in 1957 and expected to remain in service into the 2040s.

The KC-135 is derived from the original Boeing jet transport "proof of concept" demonstrator, the Boeing 367-80 (commonly called the "Dash-80"). As such, it has a narrower fuselage and is shorter than the Boeing 707 jetliner.

Developed in the late-1950s this basic airframe is characterized by swept wings and tail, four under wing mounted engine pods, a horizontal stabilizer mounted on the fuselage near the bottom of the vertical stabilizer with positive dihedral on the two horizontal planes and a hi-frequency radio antenna which protrudes forward from the top of the vertical fin or stabilizer. These basic features make it strongly resemble the commercial Boeing 707 and 720 aircraft although, under the skin, it is actually a different aircraft. 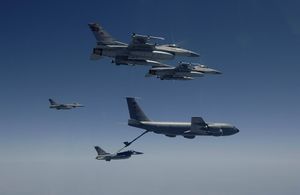 Boeing's 367-80 was the basic design for the commercial Boeing 707 passenger aircraft as well as the KC-135A Stratotanker. In 1954 the USAF's Strategic Air Command ordered the first 29 of its future fleet of 732. The first aircraft flew in August 1956 and the initial production Stratotanker was delivered to Castle Air Force Base, California, in June 1957. The last KC-135 was delivered to the Air Force in 1965.

Four turbofans, mounted under 35-degree swept wings, power the KC-135 to takeoffs at gross weights up to 322,500 pounds (146,300 kg). Nearly all internal fuel can be pumped through the tanker's flying boom, the KC-135's primary fuel transfer method. A special shuttlecock-shaped drogue, attached to and trailing behind the flying boom, may be used to refuel aircraft fitted with probes. A boom operator stationed in the rear of the aircraft controls the boom while lying on their stomach. A cargo deck above the refueling system can hold a mixed load of passengers and cargo. Depending on fuel storage configuration, the KC-135 can carry up to 83,000 pounds (37,600 kg) of cargo. 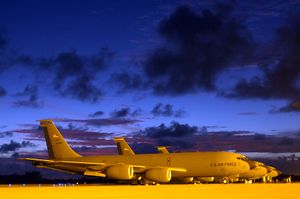 KC-135Rs at twilight on the flightline

The KC-135R/T was a receiver-capable tanker, used for pilot training and operational refueling missions. Currently all KC-135R/T models (Receiver capable) are with the 22nd Air Refueling Wing at McConnell AFB, KS[citation needed]. Most of these are used for force extension and Special Operations missions, and are crewed by highly qualified receiver capable crews. If not used for the receiver mission, these aircraft can be flown just like any other KC-135R. 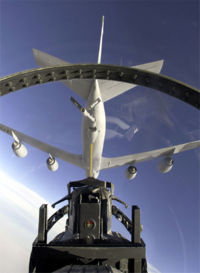 In order to expand the KC-135's capabilities and improve its reliability, the aircraft has undergone a number of upgrades. Among these was the Pacer-CRAG program (CRAG=Compass, Radar and GPS) which ran from 1999 to 2002 and modified all the aircraft in the inventory to eliminate the Navigator position from the flight crew. The modifications were performed by BAE Systems at the Mojave Airport in California.[1]

Under an earlier modification program, 157 Air Force Reserve (AFRES) and Air National Guard (ANG) tankers were re-engined with the Pratt & Whitney TF-33-PW-102 engines from retired 707 airliners. The re-engined tanker, designated the KC-135E, is 14% more fuel efficient than the KC-135A and can offload 20% more fuel.

This program adds pods to the KC-135's wings. The pods allow refueling for US Navy and NATO aircraft while keeping the tail mounted refueling boom.[1] 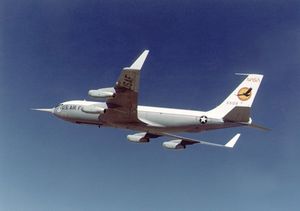 Besides its primary role as an inflight aircraft refueler, the KC-135, designated NKC-135, has assisted in several research projects at the NASA Dryden Flight Research Center at Edwards Air Force Base, California. One such project occurred between 1979 and 1980 when special wingtip "winglets", developed by Richard Whitcomb of the Langley Research Center, were tested at Dryden, using a NKC-135A tanker loaned to NASA by the Air Force. Winglets are small, nearly vertical fins installed on an aircraft's wing tips. The results of the research showed that drag was reduced and range could be increased by as much as 7 percent at cruise speeds.[2][3] Winglets are now being incorporated into most new commercial and military transport jets, as well as business aviation jets.

A number of KC-135A and KC-135B aircraft have been modified to EC-135 configuration for use in several different roles.

In January 2006, Secretary of Defense Donald Rumsfeld announced the cancellation of the KC-767 lease which would have replaced some of the KC-135 fleet. This followed public revelations of corruption in how the contract was awarded, as well as controversy regarding the original leasing rather than outright purchase agreement. This is also designed to be a cost-cutting measure and is part of a larger reorganization and redefinition of the Air Force's mission that includes the retirement of the E-4B fleet, the cancellation of the Boeing 767-based E-10 MC2A program, as well as the elimination of all but 58 B-52 Stratofortresses. Secretary of Defense Rumsfeld states that this move will in no way impair the Air Force's ability to deliver the mission of the KC-767, which will be accomplished by continuing upgrades to the KC-135 and KC-10 Extender fleet.

In January 2007, the Air Force formally launched the KC-X program with a request for proposals. The KC-X will replace the KC-135.[2]