The MD Helicopters MD 500 series is a family of light utility civilian and military helicopters. The MD 500 originated as the Hughes 500, a civilian version of the US Army's OH-6A Cayuse/Loach. The series currently includes the MD 500E, MD 520N, and MD 530F.

The successful Hughes 500/MD 500 series began life in response to a US Army requirement for a light observation helicopter.[1] Hughes' Model 369 won the contest against competition from Bell and Hiller. The OH-6 Cayuse first flew as in February 1963. 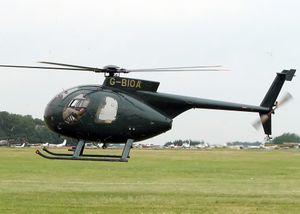 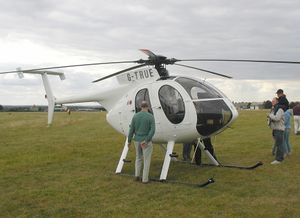 Prior to the OH-6's first flight, Hughes announced it was developing a civil version, to be marketed as the Hughes 500, available in basic five and seven seat configurations.[1] A utility version with a more powerful engine was offered as the 500U (later called the 500C).

The improved Hughes 500D became the primary model in 1976, with a more powerful engine, a T-tail, and new five-blade main rotor; a four-blade tail rotor was optional.[1] The 500D was replaced by the 500E from 1982 with a pointed nose and various interior improvements such as greater head and leg room. The 530F was a more powerful version of the 500E optimised for hot and high work.

Military variants are marketed under the MD 500 Defender name. 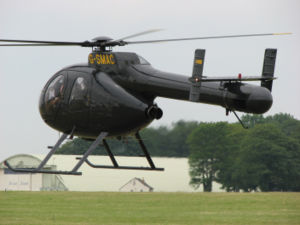 The MD 520N introduced a revolutionary advance in helicopter design as it dispensed with a conventional tail rotor in favour of the Hughes/McDonnell Douglas developed NOTAR system.[1]

McDonnell Douglas originally intended to develop the standard MD 520N alongside the more powerful hot and high optimised MD 530N (both were launched in January 1989 and were based on the conventional MD 500E). The MD 530N was the first to fly, on December 29 1989, the MD 520N first flew on May 1 1990. Development of the MD 530N was suspended when McDonnell Douglas decided that the MD 520N met most customer requirements for the 530N. Certification for the MD 520N was awarded on September 13 1991, and the first was delivered on December 31 that year.

On October 5, 1999, Officer Desmond J. Casey of the San Jose, CA Police Department crash landed a department operated MD-520N on a city street, in a business district. Officer Casey was killed, and later decorated for heroism for avoiding civilian cars and structures during the crash. Herman Yee, a civilian mechanic, was also on board, and was also killed. [1] The NTSB report issued no conclusions, but noted that there was corrosion on a "control conduit cap" that may have played a role in the crash. [2] Airworthiness Directive issued.[3]

In 2000, MD Helicopters announced enhancements to the MD 520N including an improved RR 250-C20R+ engine with 3-5% more power for better performance on warm days, and, with changes to the diffuser and fan rigging, increased range.

The NOTAR no-tail-rotor is popular with law enforcement because of its very low noise levels.[citation needed] Instead of an anti-torque tail rotor, a fan exhaust is directed through slots in the tail boom, using the Coanda effect to counteract the torque of the main rotor, and out of a controllable thruster at the end of the tail boom for yaw control.