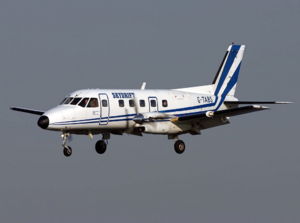 The Embraer EMB 110 Bandeirante (banner in Portuguese) is a general purpose 15-21 passenger twin-turboprop light transport aircraft suitable for military and civil duties. It is manufactured by the Brazilian corporation, Embraer.

The EMB 110 was designed by the French engineer Max Holste following the specifications of the IPD-6504 program set by the Brazilian Ministry of Aeronautics in 1965.

The goal was to create a general purpose aircraft, suitable for both civilian and military roles with a low operational cost and high reliability. On this measure, the EMB 110 has succeeded.

Further development of the EMB 110 was halted by the manufacturer in order to shift focus to the larger, faster, and pressurized 30-seat EMB 120 Brasilia. 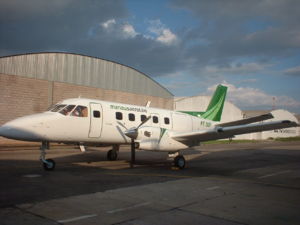 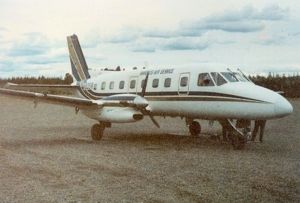 The first military prototype, designated YC-95, was flown in October 1968 and production began the following year by the newly formed aircraft company Embraer. The passenger model first flew on August 9, 1972 and entered commercial service on April 16, 1973 with the now defunct Brazilian airliner Transbrasil.

Over the next 21 years Embraer built 494 aircraft in numerous configurations for a variety of roles including: