From PlaneSpottingWorld, for aviation fans everywhere
Jump to:navigation, search
This article is about a variant of the Harrier family of V/STOL aircraft. For other uses of "Harrier", see Harrier.

The McDonnell Douglas AV-8B Harrier II is a family of second-generation vertical/short takeoff and landing or V/STOL jet multirole aircraft of the late 20th century. British Aerospace rejoined the project in the early 1980s, and it is currently managed by Boeing/BAE Systems since the 1990s.

Developed from the earlier Hawker Siddeley Harriers, it is primarily used for light attack or multi-role tasks, typically operated from small aircraft carriers. Versions are used by several NATO countries, including the United Kingdom, Spain, Italy, and the United States.

Though it shares the designation letter number with the earlier AV-8 Harrier, the AV-8B Harrier II was extensively redesigned by McDonnell Douglas.

The aircraft is known as the AV-8B Harrier II in USMC service and the Harrier GR7/GR9 in RAF service. The AV-8A was a previous-generation Hawker Siddeley Harrier GR.1A procured for the US Marine Corps. It is commonly referred to as the Harrier Jump-jet.

It might have been the "AV-12" designation (with A as a modified mission, not basic mission letter), but that was eventually taken up by the Rockwell XFV-12 fighter, which was canceled with the Sea Control Ship it was supposed to deploy aboard. However, using the V- series is debatable since the aircraft's attack role is a basic mission not a modifed mission.

For the amount of redesign over the AV-8A Harrier, it could have easily been given a new number code (such as AV-16), but DoD standards on a new numbers for aircraft families vary widely.

The Harrier II is notable as an example of US-UK cooperation and of Cold War defense achievements. Of note is the U.S aid funding early development of the Hawker P.1127 under the Mutual Weapons Development Program (MWDP), and the salvaging of what was left of the AV-16 Advanced Harrier Program by McDonnell Douglas, making the second-generation family possible.

McDonnell Douglas was restarted its own program which was nearing production status when British Aerospace rejoined the program in the 1980s. They then jointly produced the aircraft, and BAe developed second generation Harriers from the aircraft. By the 1990s McDonnell Douglas bought by Boeing, and BAe was merged into Bae Systems who went on to manage the family into the early 21st century.

The AV-8B had its direct origins in a Joint British-U.S. project (Hawker-Siddeley and McDonnell Douglas Aircraft) for a much-improved Harrier aircraft, the AV-16. However cost over-runs in engine development on the part of Rolls Royce and in the aircraft development caused the British to pull out of the program. Interest remained in the U.S. so a less ambitious, though still expensive project was undertaken by McDonnell on their own catered to U.S. needs. Using things learned from AV-16 development, though dropping some things such as further Pegasus development, the development work continued leading to the AV-8B for the U.S. Marine Corps. The aircraft was centered on the Marines' need for a light ground attack airplane and focused on payload and range as opposed to speed. In the early 1980s, the British restarted development of their own second generation Harrier based on the U.S. design which led eventually to the GR.5.

Aircraft were built by McDonnell Douglas and British Aerospace (later BAE Systems), the latter at their Kingston & Dunsfold facilities in Surrey, in the UK. The factories were also home to the Hawker Hunter, and BAe Hawk T1. 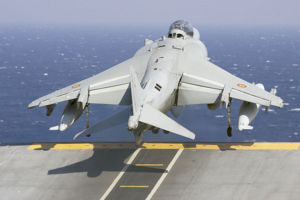 Several variants of the Harrier are used by four countries' military forces. The Royal Air Force and Fleet Air Arm of the United Kingdom operate a number of variants and versions starting in the late 1980s, including the GR7/7A, GR9/9A, T10 and T12 versions. (see RAF Harrier II). The United States Marine Corps has operated the McDonnell Douglas AV-8B and TAV-8B since 1985. The Spanish Naval air wing (Arma Aerea De La Armada) operates the AV-8B+ and AV-8B, as well as a TAV-8S Harrier I. The Italian Navy air wing (Aviazione per la Marina Militare) also uses the AV-8B+ and TAV-8B. Harrier variants can vary significantly depending on the exact model, even among a single country's aircraft.

The first AV-8B Harrier IIs produced were commonly known as the "Day Attack" variant, and are no longer in service. Most were upgraded to Night Attack Harrier or Harrier II Plus standards, with the remainder being withdrawn from service.

Fielded in 1991, the Night Attack Harrier incorporated a Navigation Forward Looking Infrared camera (NAVFLIR). The cockpit was also upgraded, including compatibility with night vision goggles. Concurrent with the new version of the aircraft was introduced a more powerful Rolls Royce Pegasus II engine. It was originally intended to be designated AV-8D.[1]

The Harrier II Plus is very similar to the Night Attack variant, with the addition of an APG-65 radar (the same as in early F/A-18 Hornets) in an extended nose, making it capable of operating advanced missiles such as the AIM-120 AMRAAM. Used by USMC, Spanish Navy, and Italian Navy.

An upgraded version developed from the AV-8A model as an interim pending delivery of the AV-8B. The airframe was not based on the AV-8B Harrier II.

AV-8 Harrier II being refueled by a KC-10 Extender 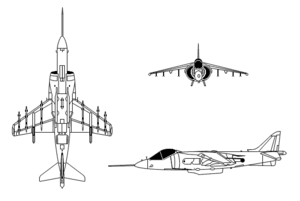