The Boeing B-50 Superfortress was a post-World War II revision of the wartime B-29 Superfortress with new, more powerful Pratt & Whitney R-4360 radial engines, a taller vertical stabilizer, and other improvements.

Boeing built 371 of these between 1947 and 1953, some serving until 1965. A reconnaissance variant, the RB-50B (a B-50B conversion) existed and played an important role in Cold War espionage. An aerial refueling tanker conversion designated KB-50 was used in the Vietnam War.

In 1949, the B-50 Lucky Lady II, commanded by Captain James Gallagher, became the first airplane to circle the world nonstop. This was achieved by refueling the plane in flight.

While not many were ordered, the B-50 was the ultimate expression of the B-29 family and one of the last piston-engined bombers built. The B-50 was retired from its main role as atomic bomber in 1955. A number were converted into KB-50 tankers and lasted long enough to be deployed to Southeast Asia in support of tactical operations. The type was grounded and removed completely from inventory when wreckage of a KB-50 that broke up in flight in 1965 revealed corrosion problems in the fleet. No flying examples exist today, although several can be found in various air museums. 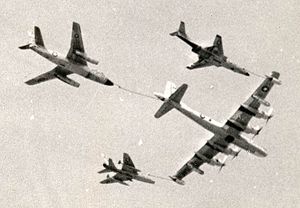 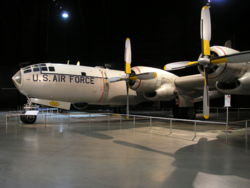 WB-50D Superfortress used for weather reconnaissance on display at the National Museum of the United States Air Force in Dayton, Ohio.

Wikimedia Commons has media related to:
B-50 Superfortress