Like the C-47 Skytrain, the C-54 Skymaster was derived from a civilian airliner (the Douglas DC-4).

C-54s began service with the Army Air Forces in 1942, carrying up to 26 passengers. (Later versions carried up to 50 passengers.) The U.S. Navy also acquired the type, under the designation R5D. The C-54 was one of the most commonly used long-range transports by the U.S. armed forces in World War II. 515 C-54s were manufactured in Santa Monica, CA and 655 were manufactured in Chicago, Illinois.

After World War II, the C-54 continued to serve as the primary airlifter of the new United States Air Force and with the United States Navy.

The USAF Strategic Air Command had C-54 Skymasters in service from 1946 through 1975.

President Harry S. Truman signed the National Security Act of 1947, which created the U.S. Air Force, on board Sacred Cow, the Presidential C-54 which is preserved at the National Museum of the United States Air Force. More than 300 C-54s and R5Ds formed the backbone of the US contribution to the Berlin Airlift in 1948. They also served as the main airlift during the Korean War. After the Korean War, the C-54 was replaced by the Douglas C-124 Globemaster II, but continued to be used by the U.S. Air Force until 1972.

The C-54 was the personal aircraft of Franklin D. Roosevelt, Douglas MacArthur, and Winston Churchill (along with an Avro York). The C-54 was also used by the Royal Air Force, Royal Canadian Air Force, the Armée de l'Air, and the armed forces of at least twelve other nations. 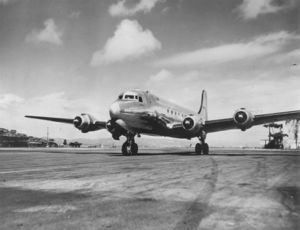 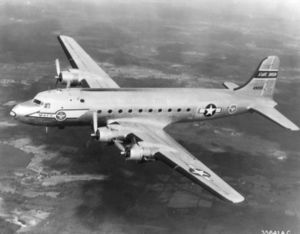