The Douglas A-1 (formerly AD) Skyraider was a U.S. single-seat attack bomber of the 1950s, 1960s and early 1970s. A propeller-driven anachronism in the jet age, the Skyraider had a remarkably long and successful career well into the space age, and inspiring a straight-winged slow flying jet powered successor which is still in front line service today.

The A-1 was originally designed to meet World War II requirements for a carrier-based, single-place, long-range, high performance dive-/torpedo bomber. Designed by Ed Heinemann of the Douglas Aircraft Company, the Skyraider was ordered in July 1944 as the XBT2D-1. In April 1945, one month after its first flight on 18 March 1945, it was evaluated at the Naval Air Test Center (NATC), and December 1946, after redesignated to AD-1, delivery of the first AD to fleet squadron was made to VA-19A.

The low-wing monoplane design started with a Wright R-3350 radial engine, later upgraded multiple times. Its distinctive feature was the presence of seven hardpoints on each wing. The large straight wing give it excellent low speed maneuverabiity, and enable it to carry a tremendous amount of ordnance over a considerable combat radius and loiter time for its size, comparable to much heavier subsonic or supersonic jets. The aircraft is optimized for the ground-attack mission, and is armoured against ground fire in key locations, unlike faster fighters adapted to carry bombs such as the F4U Corsair or P-51 Mustang which would be retired by US forces long before the 1960s.

The piston engined prop-driven Skyraider was a post-war follow-on to WWII dive bombers and torpedo bombers such as the Helldiver and Avenger. It was replaced in the 1960s by the A-4 Skyhawk as the Navy's primary light attack plane. Used over Korea and briefly over North Vietnam, it was adopted as the primary ground support attack for the US Air Force and South Vietnamese VNAF during the Vietnam war, before being supplanted by the jet powered A-37 Dragonfly and A-7 Corsair II. 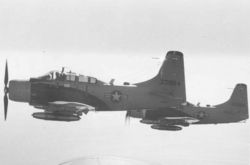 Though the Skyraider was produced too late to take part in World War II, it became the backbone of U.S. Navy aircraft carrier and United States Marine Corps (USMC) strike aircraft sorties in Korean War, with the first ADs going into action from the USS Valley Forge.[citation needed] Its ability to employ a wide variety of weapons allowed it to be used against nearly all Korean targets, earning the Skyraider the reputation of the most effective close air support aircraft in the world at the time.[citation needed] Its weapon load and 10-hour flying time far surpassed the jets that were available at the time.[citation needed][citation needed] On 16 June 1953, a USMC AD-4 from VMC-1 piloted by Major George H. Linnemeier and CWO Vernon S. Kramer shot down a Soviet-built Polikarpov Po-2 biplane, the only documented Skyraider air victory of the war.[1] During the Korean War (1950-1953) A-1 Skyraiders were flown only by the US Navy and US Marine Corps, and were normally painted in dark navy blue. A total of 101 Navy and Marine AD Skyraiders were lost in combat during the Korean War, and 27 were lost to operational causes, for a total loss of 128 Skyraiders in the Korean War. 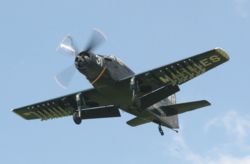 Although the carrier air wing was rapidly transitioning to jet aircraft, the A-1 Skyraider was still the medium attack aircraft in many air wings in 1965 with the A-6A Intruder slated to replace it. Skyraiders participated in the first strikes against North Vietnam, but were eventually replaced by Intruders. U.S. Navy Skyraiders shot down two Soviet-built Mikoyan-Gurevich MiG-17 jet fighters during the war—on 21 June 1966 by LT Clinton B. Johnson and LTJG Charles W. Hartman III (shared victory) of VA-25, and on 9 October 1966 by LTJG William T. Patton of VA-176.[1] As they were released from Navy service, Skyraiders were introduced into the South Vietnamese Air Force (VNAF) and adopted by the USAF as one of the Skyraider's most famous roles as the "Sandy" helicopter escort. [citation needed] USAF Major Bernard F. Fisher piloted an A-1E on the March 10, 1966 mission for which he was awarded the Medal of Honor for rescuing Major "Jump" Myers at A Shau Special Forces Camp.[citation needed]USAF Lieutenant Colonel William A.Jones, III piloted an A-1H on the September 1 1968 mission for which he was awarded the Medal of Honor. In that mission, despite significant damage to his aircraft and suffering serious burns, he returned to his base and reported the position of a downed flight crew member.[citation needed] After November 1972, all A-1s in US service in Southeast Asia were transferred to the South Vietnamese Air Force (VNAF) and their former roles were taken over by the subsonic A-37 Dragonfly and A-7 Corsair II.[citation needed] The Skyraider in Vietnam pioneered the concept of tough, survivable aircraft with long loiter times and large ordnance loads. The USAF lost 201 Skyraiders to all causes in Southeast Asia, while the Navy lost 65 to all causes. Of the 266 lost A-1's, 5 were shot down by surface to air missiles (SAMs), and 3 were shot down in air to air combat; two by North Vietnamese Mig-17's. The first A-1 was shot down on 29 April 1966, and the second A-1 was lost on 19 April 1967; both were from the 602 Air Commando Squadron (ACS). The third A-1 Skyraider was from Squadron VA-35 and was lost to a Red Chinese Mig-19 (J-6) on 14 February 1968. LTJG Joseph P. Dunn (USN), had flown too close to the Communist Chinese held island of Hainan, and had been intercepted. Lieutenant Dunn's A-1 Skyraider was the last US Navy A-1 lost in the war, and he did not survive. Shortly thereafter, A-1 Skyraider naval squadron's transitioned to A-4 Skyhawks. [3]

In 1965, to highlight the dropping of the 6 millionth pound of ordnance; CDR Clarence J. Stoddard, flying an A-1H, dropped a special, one time only, object in addition to his other munitions. It was a (no longer working) clean toilet. [1] 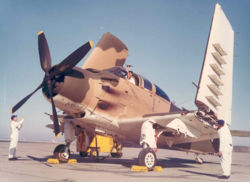 In addition to serving during Korea and Vietnam as an attack aircraft, it was modified into a carrier-based airborne early warning aircraft, replacing the Grumman TBM-3W Avenger. It served in this function in the USN and Royal Navy, being replaced by the E-1 Tracer and Fairey Gannet respectively in those services.[citation needed]

Production ended in 1957 with a total of 3,180 built. However, in 1962 the existing Skyraiders were redesignated A-1D through A-1J and later used by both the USAF and the Navy in the Vietnam War.

The Skyraider went through seven versions, starting with the AD-1, then AD-2 and AD-3 with various minor improvements, then the AD-4 with a more powerful R-3350-26WA engine. The AD-5 was significantly widened, allowing two crew to sit side-by-side (this was not the first multiple-crew variant, the AD-1Q being a two-seater and the AD-3N a three-seater); it also came in a four-seat night-attack version, the AD-5N. The AD-6 was an improved AD-4B with improved low-level bombing equipment, and the final production version AD-7 was upgraded to a R-3350-26WB engine. 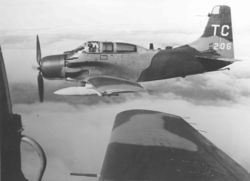 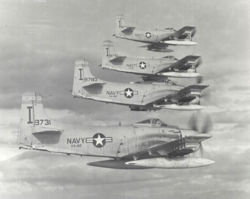 The Skyraider's performance parameters for armour protection, survivability, payload, loiter, and low speed performance which could not be matched by faster fighters in Vietnam formed the baseline for the A-X specification for a turboprop or turbofan powered ground support aircraft. This project which took attack fighter development in a different direction from faster and sleeker became the experimental Northrop YA-9 and operational A-10 Thunderbolt II which entered service too late for Vietnam. This program also was a heavy influence on the Soviet Sukhoi Su-25. The Skyraider would be the link between the propeller age and jet age of ground attack craft, carrying on the legacy of previous dive and torpedo bombers such as the Stuka, Ilyushin Il-2, Dauntless and Avenger. The F-35 / JSF, another supersonic fighter optimized for speed and not low speed turning, loiter, or survivability against ground fire, is slated to finally replace this type of plane when the A-10, currently being upgraded for continued frontline service, is retired. 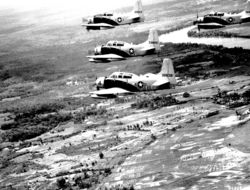 A-1E Skyraiders fly in formation over South Vietnam on way to target on June 25, 1965. The aircraft are assigned to the 34th Tactical Group, based at Bien Hoa, South Vietnam.

The Skyraider is not as iconic as some other aircraft, but it has been featured in some Vietnam-era films such as The Flight of the Intruder flying as Sandy escort and The Green Berets in ground support.

Wikimedia Commons has media related to:
A-1 Skyraider

Wikisource has several original texts related to:
Audio recordings and transcripts with comments of actual Wild Weasel missions flown during the Vietnam War, including Sandy-assisted rescue.