The Douglas C-74 Globemaster, was a heavy-lift cargo aircraft built by the Douglas Aircraft Company in Long Beach, California.

The C-74 Globemaster was developed in response to a need by the United States Army Air Forces for a transport aircraft with transoceanic range. Douglas Aircraft Company responded in 1942 with a giant four-engined design. The aircraft did not actually fly until September 5, 1945. With the need for military aircraft greatly reduced by the end of World War II, the order was cancelled and production ended in January 1946 after production of only fourteen aircraft. This cancellation also ended plans to build an airliner version of the C-74 for the civilian market.

At the time of its first flight, the C-74 was the largest landplane to enter production, with a maximum weight of 172,000 lb (78,000 kg). It was able to carry 125 soldiers or 48,150 lb (21,840 kg) of cargo over a range of 3,400 statute miles (5,500 km). Perhaps the most notable feature of the C-74 was its cockpit arrangement with separate canopies over the pilot and copilot; the same arrangement was used for the XB-42 Mixmaster. This arrangement was unpopular with flight crews, however, and the aircraft were retrofitted with a more conventional arrangement. During the life of the aircraft, the engines were also upgraded to 3,250 hp Pratt & Whitney R-4360-49 engines.

The C-74 supported the Berlin Airlift by flying cargo from the U.S. to staging bases in Europe, from which it was flown to Berlin in smaller C-47 Skytrain and C-54 Skymaster aircraft. Experience with the Berlin Airlift demonstrated that the new United States Air Force needed a heavy strategic airlift capability. The fifth C-74 built was modified to be a prototype for the C-124 Globemaster II, which used the same wing and empennage as the C-74, but used a much larger fuselage. This newer aircraft quickly superseded the C-74 in service. All of the surviving C-74s were scrapped in the 1960s and 1970s. 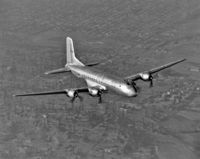