First flown in 1942, the American Douglas A-26 Invader (after 1948, the B-26, and after 1966, the A-26A) was a twin-engined light attack bomber aircraft built during World War II and seeing service in both the Korean and Vietnam wars. A limited number of highly modified aircraft served in combat until 1969. The last A-26 was retired from service in 1972 by the National Guard Bureau and donated to the National Air and Space Museum.

The A-26 was an unusual design for an attack bomber of that period, as it was designed as a single pilot airplane. The traditional co-pilot's seat did not have flight controls, instead, a crew member who served as a navigator and bombardier sat in that position. A gunner who operated the defensive armament of remotely-controlled doral and ventral turrets. In the "C" model, the navigator also loaded the nose armament.

The Douglas XA-26 prototype (41-19504) first flew 10 July 1942 with famed test pilot Ben O. Howard at the controls. Flight tests revealed excellent performance and handling, but there were some problems with engine cooling which led to cowling changes and the removal of the propeller spinners on production aircraft as well as a modification of the nose gear after repeated collapses in testing. [3] The prototype's "flat-topped" canopy was later changed to a clamshell type with greatly improved visibility. [4] The A-26 was originally built in two different configurations: the A-26B had a solid nose, which normally housed six or eight .50 caliber machine guns, while the A-26C’s glass nose contained a Norden bombsight and was used for medium altitude precision bombing. Some aircraft were armed with additional guns in their wings, giving some configurations as many as fourteen .50 caliber machine guns fixed forward. 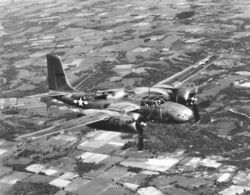 The Douglas company began delivering the production model A-26B in August 1943. Douglas Invaders began arriving in England in September 1944 for assignment to the 9th Air Force and entered combat two months later on Nov. 19. Invaders appeared in the Pacific Theater in January 1945 and proved to be highly effective during the remaining months of the war. It is believed by some to have been one of the finest aircraft developed in World War II. [citation needed]

The USAF Strategic Air Command had the B-26 (RB-26) in service from 1949 through 1950. The US Navy also used a small number of these aircraft in their utility squadrons for target towing and general utility use. The Navy designation was JD-1 and JD-1D until 1962, when the JD-1 was redesignated UB-26J and the JD-1D was redesignated DB-26J.

In the 1960s B-26s provided by Intermountain Airlines were flown by Cuban exiles during the failed Bay of Pigs invasion. CIA mercenary pilots in the Congo also flew them against "Simba" rebels who were supported by the Chinese and Soviets.

During the early phase of the Vietnam War, On Mark Engineering Company of Van Nuys, California was selected by the Air Force to extensively upgrade the Invader for a counterinsurgency role. On Mark converted 40 Invaders to the new B-26K Counter Invader standard, which included upgraded engines, re-manufactured wings and wing tip fuel tanks. In May 1966, the B-26K was re-designated A-26A and deployed in Thailand to help disrupt supplies moving along the Ho Chi Minh trail. 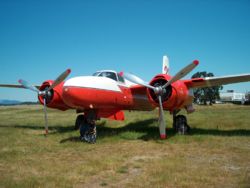 A Conair 322 (B-26 water bomber conversion) at the BC Aviation Museum, Sidney, BC

Two A-26 fire bombers (No. 57- N9425Z and No. 59 N4818Z) were prominently featured in the 1989 Steven Spielberg film, Always.[citation needed] The flying for the movie was performed by well-known movie pilot Steve Hinton and Dennis Lynch, the owner of the A-26s. In the 1973 Terrence Malick film Badlands, a civilian A-26 was used as a VIP transport. 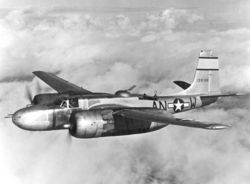 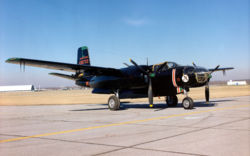