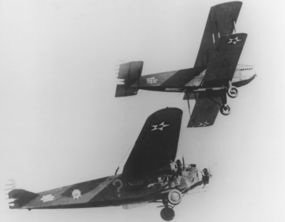 The Douglas C-1 was a cargo/transport airplane produced by the Douglas Aircraft Corporation for the United States Army Air Service starting in 1925.

The C-1 was the first plane assigned in the new C- category. The aircraft design was based on several earlier and similar designs developed by Douglas in the early 1920s (including the Douglas World Cruisers used in the first round-the-world flight in 1924). The C-1 featured an enclosed passenger compartment capable of carrying six passengers or about 2,500 pounds of cargo. A trap door was placed in the lower fuselage to allow large and/or heavy cargo (particularly aircraft engines) to be lifted directly into the cargo compartment. An auxiliary door for passengers and light cargo was included on the right side of the center fuselage.

The C-1 biplane was powered by the Liberty L-12 engine and carried a crew of two in an open-cockpit. Several C-1s were used in test programs -- as an engine test bed, as a prototype air ambulance and as refueling aircraft for early air-to-air refueling experiments. Two of these aircraft were used as "tankers" in the 1929 record endurance flight of the Fokker C-2 Question Mark.

Seventeen additional aircraft were ordered in 1926 and 1927 as C-1Cs and were slightly larger than the original C-1s.

This aircraft article is missing some (or all) of its specifications. If you have a source, you can help Wikipedia by adding them.
Retrieved from "http://plane.spottingworld.com/wiki/index.php?title=Douglas_C-1&oldid=2042"
Categories: