The Douglas B-18 Bolo was a United States Army Air Corps and Royal Canadian Air Force bomber of the late 1930s and early 1940s based on the Douglas DC-2. Although not the latest or most advanced design, the B-18 was pressed into service where it performed wartime patrol duties early in World War II.

In 1934, the United States Army Air Corps put out a request for a bomber with double the bomb load and range of the Martin B-10, which was just entering service as the Army's standard bomber.

In the evaluation at Wright Field the following year, Douglas showed its DB-1. It competed with the Boeing Model 299 (later the B-17 Flying Fortress) and Martin Model 146. While the Boeing design was clearly superior, the crash of the B-17 prototype (caused by taking off with the controls locked) removed it from consideration. During the depths of the Great Depression, the lower price of the DB-1 ($58,500 vs. $99,620 for the Model 299) also counted in its favor. The Douglas design was ordered into immediate production in January 1936 as the B-18. 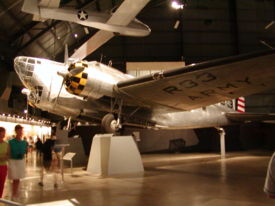 The DB-1 design was essentially the same as the DC-2, with several modifications. The wingspan was 4.5 ft (1.4 m) greater. The fuselage was deeper, to better accommodate bombs and the six-member crew; the wings were fixed in the middle of the cross-section rather than to the bottom, but this was due to the deeper fuselage. Added armament included nose, dorsal, and ventral gun turrets.

The initial contract called for 133 B-18s (including DB-1), using Wright radials. The last B-18 of the run, designated DB-2 by the company, had a power-operated nose turret. This design did not become standard.

Additional contracts in 1937 (177 aircraft) and 1938 (40 aircraft) were for the B-18A, which had the bombardier's position further forward over the nose-gunner's station. The B-18A also used more powerful engines.

By 1940, most US Army Air Force bomber squadrons were equipped with B-18s or B-18As. Many of those in the 5th Bomb Group and 11th Bomb Group in Hawaii were destroyed in the attack on Pearl Harbor. 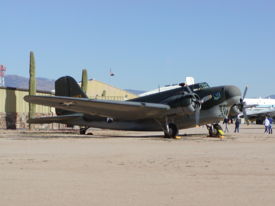 B-17s supplanted B-18s in first-line service in 1942. Following this, 122 B-18As were modified for anti-submarine warfare. The bombardier was replaced by a search radar with a large radome. Magnetic anomaly detection (MAD) equipment was sometimes housed in a tail boom. These aircraft, designated B-18B, were used in the Caribbean on anti-submarine patrol. Two aircraft were transferred to Força Aérea Brasileira in 1942. The Royal Canadian Air Force acquired 20 B-18As (designated the Douglas Digby Mark I), and also used them for patrol duties. Bolos and Digbys sank four submarines during the course of the war.

Only five B-18s still exist, preserved in museums in the United States:

Wikimedia Commons has media related to:
B-18 Bolo