The Douglas A-20/DB-7 Havoc was a family of attack, light bomber and night fighter aircraft of World War II, serving several Allied air forces, principally those of the Soviet Union, United Kingdom, and United States. The DB-7 was also used by the air forces of Australia, South Africa, France, and The Netherlands during the war, and Brazil afterwards. The aircraft was known as Boston among Commonwealth air forces, while the night fighter variants were known as Havoc. The USAAF assigned the DB-7 the designation "A-20" and gave it the popular name "Havoc". 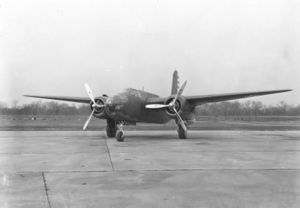 In March 1937, a design team headed by Donald Douglas, Jack Northrop and Ed Heinemann produced a proposal for a light bomber powered by a pair of 450 hp (340 kW) Pratt & Whitney R-985 Wasp Junior engines mounted on a high-mounted wing. It was estimated it could have carried a 1000 lb (450 kg) bomb load at 250 mph (400 km/h). Reports of aircraft performance from the Spanish Civil War indicated that this design would be seriously underpowered and, subsequently, it was cancelled.

In the autumn of the same year, the U.S. Army Air Corps issued its own specification for an attack aircraft. The Douglas team, now headed by Heinemann, took the Model 7A design, upgraded massively to 1100 hp (820 kW) Pratt & Whitney R-1830 S3C3-G Twin Wasp engines, and submitted the design as the Model 7B. It faced competition from the North American NA-40, the Stearman X-100 and the Martin 167F. The Model 7B was maneuverable and fast, but did not attract any US orders.

The model did, however, attract the attention of a French Purchasing Commission visiting the USA. The French discreetly participated in the flight trials, so as not to attract criticism from US isolationists, but the secret was blown when the 7B crashed on 23 January 1939, while demonstrating single-engine performance. The French were still impressed enough to order 100 production aircraft, with the order increased to 270 when the war began.

Although not the fastest or longest-legged in its class, the Douglas DB-7 series distinguished itself as a tough, dependable combat aircraft with an excellent reputation due to its turn of speed and good manoeuvrability. In a report to the Aeroplane and Armament Experimental Establishment (AAEE) at Boscombe Down, test pilots summed it up as "has no vices and is very easy to takeoff and land... The aeroplane represents a definite advantage in the design of flying controls... extremely pleasant to fly and manoeuvre." [1]Ex-pilots often consider it their favorite aircraft of the war due to the ability to toss it around like a fighter [2]. Its true impact was that the Douglas bomber/night fighter was extremely adaptable and found a role in every combat theater of the war and excelled as a true "pilot's aeroplane." [3]

The French order called for substantial modifications, and the new designation DB-7 (for Douglas Bomber 7) was introduced. It had a narrower, deeper fuselage, 1000 hp (750 kW) Pratt & Whitney R-1830-SC3-G radials, French-built guns, and metric instruments. Midway through the delivery phase, engines were switched to 1100 hp (820 kW) Pratt & Whitney R-1830-S3C4-G. The French designation was DB-7 B-3 (the B-3 signifying "three-seat bomber").

The DB-7s were shipped in sections to Casablanca for assembly and service in France and French North Africa. When the Germans attacked France and the Low Countries on 10 May 1940, the 64 available DB-7s were deployed against the advancing Panzers. Before the armistice they were evacuated to North Africa to avoid capture by German forces. Here, they fell under control from the Vichy government, but saw practically no action against the Allies except briefly during Operation Torch. After French forces in North Africa had sided with the Allies, DB-7 were used as trainers and were replaced in frontline units by B-26 Marauders. In early 1945, a few DB-7s were sent back to France where they saw action against the remaining isolated German pockets on the Western coast.

Boston I & II
The Royal Air Force agreed to take up the balance of the now-frustrated French order which was diverted to Britain, and the aircraft were designated Boston Mk I or Mk II according to the earlier or later engine type.

Havoc I
The aircraft was not really suitable for RAF use as its range was too limited for daylight raids on Germany. Many of the Boston Mk II, plus some re-engined Mk Is, were converted for night time duties - either as intruders with 2,400 lb (1,100 kg) bombs, or as night-fighters with AI Mk IV radar. These were known collectively as Havoc Mk I. A total of 181 Bostons were converted to Havocs. In interdiction raids, Havoc intruders caused considerable damage to German targets.

Havoc-Pandora
Twenty Havocs were converted into intruder aircraft, utilizing the Long Aerial Mine (LAM), an explosive charge trailed on a long cable in the path of enemy aircraft in the hope of scoring a hit. Trials conducted with lone Handley Page Harrows dropping LAMs into the stream of German bombers were not successful, consequently, the Havocs were converted back to Mk I intruders.

Havoc I Turbinlite
A further 31 Havocs were fitted with a 2,700 million candela (2.7 Gcd) searchlight in the nose. They were unarmed and were supposed to illuminate targets for accompanying Hurricane fighters, but in practice they just made nice bright targets for German gunners.

DB-7A / Havoc II
The French Purchasing Commission ordered a further 200 bombers, to be fitted with 1600 hp (1195 kW) Wright R-2600-A5B Double Cyclone engines. This variant was designated DB-7A by Douglas. None had been delivered before the fall of France, and they served instead as night-fighters with the RAF under the name of Havoc Mk II. They had an impressive top speed of 344 mph (550 km/h) at altitude. 39 of them were used briefly in Turbinlite roles.

DB-7B / Boston III
The DB-7B was the first batch of the series to actually be ordered by Britain, in February 1940. Powered by the same engines as the DB-7A, with better armor and, crucially, larger fuel tanks, these were at last suitable for British use in the light bomber role. This was the batch for which the name "Boston" was first reserved, but since the commandeered DB-7s entered service first, this batch became known as the Boston Mk III. Amongst other operations, they took part in the attacks on the Scharnhorst, Gneisenau and Prinz Eugen during their dash through the English Channel (Operation Cerberus) and the infamous raid on Dieppe (Operation Jubilee). Three hundred were delivered and some were converted for use in intruder and night fighter roles.

DB-73
A French variant very similar to BD-7B, which again were diverted to England as Boston Mk III's. Many of these were built under licence by Boeing. Events further overtook this shipment after the German attack on the Soviet Union and the Attack on Pearl Harbor, when many Bostons were sent to the USSR and many more retained by the USAAF for its own use. Twenty-two were also sent to the RAAF by the British.

DB-7C
A Netherlands variant intended for service in the Netherlands East Indies, but the Japanese invasion was complete before they were delivered. The order was sent instead to the Soviet Union under Lend-Lease which would receive 3,125 examples of different variants of the Douglas DB-7 series. [2]

When shipments to the UK finally resumed, they were delivered under the terms of Lend-Lease. These aircraft were actually refitted A-20Cs known as the Boston IIIA.

A-20
The original American indifference to the Model 7B was overcome by the improvements made for the French and British, and the Army Air Corps ordered two models, the A-20 for high-altitude bombing and the A-20A for lower-altitude work. Both were similar to the DB-7B, the A-20 was to be fitted with turbosupercharged Wright R-2600-7 engines, but these were bulky and the prototype suffered cooling problems, so the remainder were completed with the un-supercharged R-2600-11, 59 as P-70 fighters and 3 as F-3 reconnaissance planes (described below).

One A-20 was evaluated by the US Navy as the BD-1, while the US Marine Corps operated eight examples as the BD-2.

A-20A
The US Army ordered 123 A-20As with R-2600-3 engines, and a further 20 with more powerful R-2600-11. They entered service in spring 1941. The Army liked the A-20A because of its excellent performance and because it had no adverse handling characteristics. Nine of them were transferred to Australia in 1943. The British name "Havoc" was adopted for the A-20A.

A-20B
The A-20B received the first really large order — 999 — from the US Army. They resembled the DB-7A rather than the DB-7B, with light armor and stepped rather than slanted glazing in the nose. In fact, 665 were exported to the Soviets, so relatively few actually served with the USAAC. 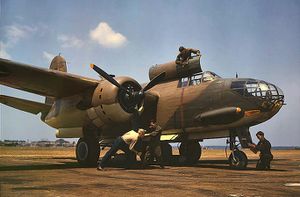 A-20C being serviced at Langley Field, Virginia, 1942.
The A-20C was an attempt to standardize a common British and American version, produced from 1941. It reverted to the slanting nose-glass and had RF-2600-23 engines, self-sealing fuel tanks and additional armor. They were equipped to carry an external 2000 lb (900 kg) naval torpedo. A total of 948 were built for Britain and the Soviet Union, but many were retained by the USAAF after Pearl Harbor. The Soviet A-20s were often fitted out with turrets of indigenous design. [4]

A-20G
The A-20G, delivered from February 1943, would be the most produced of all the series - 2850 were built. The glazed nose was replaced by a solid nose containing four 20 mm cannon and two 0.50 in (12.7 mm) Colt-Browning machine guns, making the aircraft slightly longer than previous versions. After the first batch of 250 the unreliable cannon were replaced by more machine guns. Some had a wider fuselage to accommodate a power driven gun turret. Many A-20Gs were delivered to the Soviet Union. The powerplant was the 1,600 hp (1,200 kW) R-2600-23. US A-20Gs were used on low-level sorties in the New Guinea theatre.

A-20J / Boston IV
The A-20J carried an additional bombardier in an extended acrylic glass nose section. These were intended to lead bombing formations, with the following standard A-20s dropping their bombs when signaled by the leader. A total of 450 were built, 169 for the RAF which designated them Boston Mk IV from summer 1944.

P-70
In October 1940 the USAAC felt a need for long-range fighters more than attack bombers, so some of the production run of A-20s were converted to P-70 and P-70A night-fighters. They were equipped with SCR-540 radar (a copy of British AI Mk IV), the glazed nose often painted black to reduce glare and hide the details of the radar set, and had four 20 mm forward-firing cannon in a ventral bomb bay tray. Further P-70 variants were produced from A-20C, G and J variants. The singular airframe P-70B-1 (converted from an A-20G) and subsequent P-70B-2s (converted from A-20Gs and Js) had American centimetric radar (SCR-720 or SCR-729) fitted. The P-70s and P-70As saw combat ONLY in the Pacific during World War II and only with the USAAF. The P-70B-1 and P-70B-2 aircraft never saw combat but served as night fighter aircrew trainers in the US in Florida and later in California. All P-70s were retired from service by 1945.

F-3A
The F-3A was a conversion of 46 A-20J and K models for night-time photographic reconnaissance (F-3 were a few conversions of the original A-20). This variant was employed in the European Theatre by the 155th Night Photo Squadron which began its deployment as the 423rd Night Fighter Squadron. The 423rd was converted to its photo mission in part because of knowledge of night fighter tactics which could be used to defend against German aircraft. Although armament was removed, the crew of three was retained consisting of, pilot, observer, and navigator. The first Allied aircraft to land at Itazuke, Japan after the August 1945 surrender was an F-3A. 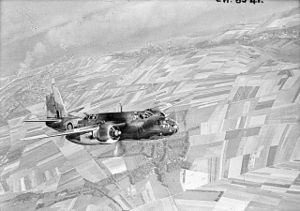 A small number of surviving airframes exist both in flyable staus as well as static display condition in museum collections worldwide.

Wikimedia Commons has media related to:
A-20 Havoc