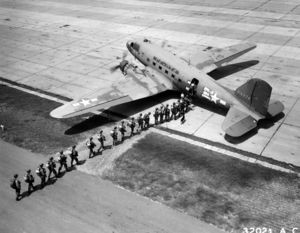 Lawson Field, Ft. Benning, Georgia. At the command of their jump leader, these 21 students of the Airborne School climb aboard a waiting C-47 of the 75th Troop Carrier Squadron which will take them up for a practice jump.

The Douglas C-47 Skytrain or Dakota is a military transport that was developed from the Douglas DC-3 airliner. It was used extensively by the Allies during World War II and remained in front line operations through the 1950s with a few remaining in operation to this day.

During World War II, the armed forces of many countries used the C-47 and modified DC-3s for the transport of troops, cargo and wounded. Over 10,000 aircraft were produced in Long Beach and Santa Monica, California and Oklahoma City, Oklahoma. The Oklahoma City plant produced 5,354 C-47s from March 1943 until August 1945.

The C-47 was vital to the success of many Allied campaigns, in particular those at Guadalcanal and in the jungles of New Guinea and Burma where the C-47 (and its naval version, the R4D) alone made it possible for Allied troops to counter the mobility of the light-travelling Japanese army. Additionally, C-47s were used to airlift supplies to the embattled American forces during the Battle of Bastogne. But possibly its most influential role in military aviation was flying The Hump from India into China where the expertise gained would later be used in the Berlin Airlift in which the C-47 would also play its part.

In Europe, the C-47 and a specialized paratroop variant, the C-53 Skytrooper, were used in vast numbers in the later stages of the war, particularly to tow gliders and drop paratroops. In the Pacific, with careful use of the island landing strips of the Pacific Ocean, C-47s were even used for ferrying soldiers serving in the Pacific theater back to the United States.

C-47s in British and Commonwealth service took the name Dakota. The C-47 also earned the nickname Gooney Bird during the European theater of operations.

The USAF Strategic Air Command had C-47 Skytrains in service from 1946 through 1947.

After World War II the U.S. Navy also structurally modified a number of the early Navy R4D aircraft and re-designated the modified aircraft as R4D-8.

The C-47 was used by the Americans in the initial stages of the Berlin Airlift and was subsequently replaced by the C-54.

The Air Force also continued to use the C-47 for various roles, including the AC-47 gunships - code named Puff the Magic Dragon or Spooky - and the EC-47 for counterintelligence during the Vietnam War.

The Royal Canadian Air Force also adopted the C-47 for use in search & rescue operations throughout the 1940s and 50s. 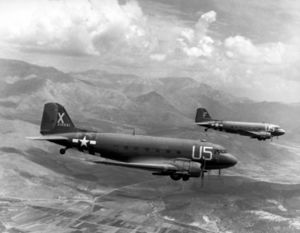 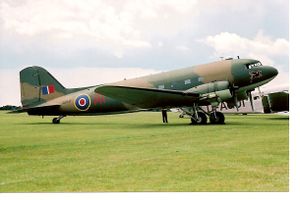 File:101st Airborne on D-Day -1.jpg
Brigadier General Anthony C. McAuliffe, artillery commander of the 101st Airborne Division, talks to paratroopers on D-Day minus 1, behind can be seen a CG-4 Waco glider and C-47s.