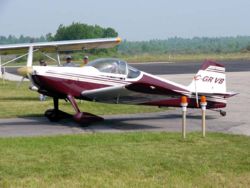 An RV-6 taxiing at the Brockville Ontario fly-in 11 June 2005. This aircraft has the earlier design forward-hinged canopy 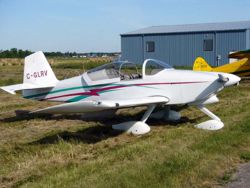 An RV-6A – the nose wheel equipped version of the RV-6. This aircraft has the later sliding canopy. 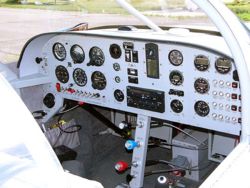 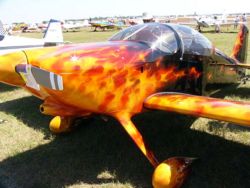 The Van's RV-6 and RV-6A are two-seat, single-engine, low-wing homebuilt airplanes sold in kit form by Van's Aircraft. The RV-6 is the tail-wheel equipped version while the RV-6A features a nose-wheel. The RV-6 was the first aircraft in the popular Van’s RV series to feature side-by-side seating and the first to offer a nosewheel option. It was first flown in 1985. Over 2000 kits have been completed and flown.

The RV-6 kit has been superseded by the similar, but improved, RV-7. Kit components are still available to allow builders to complete RV-6s under construction, but no new complete kits are available.

Market demand motivated VanGrunsven to design the RV-6 and offer it as an optional nosewheel design. The original two seater RV-4 has been a remarkable success, but the tandem seating configuration was not considered ideal by many potential owners as it leaves the passenger isolated in the back seat. Many female spouses of builders especially favoured the side-by-side configuration over the tandem arrangement.

VanGrunsven worked diligently to create a side-by-side design with a generous 43 inch wide cockpit that did not sacrifice the RV-4’s handling, STOL performance and especially its high cruise speed. In the end the RV-6 prototype produced cruise speeds that are only 3 mph slower that the RV-4 with the same engine.

The first RV-6s had a forward hinged canopy design. This was a simple one-piece arrangement, but it made taxiing the aircraft with the canopy open more difficult. Later kits had the option of a rearward sliding canopy that could more easily provide ventilation on the ground.

The RV-6A version features tubular steel landing gear with the nosewheel mounting tube welded to the engine mount. The nosewheel is free castering and the aircraft is steered with differential braking. The brakes are mounted conventionally on the rudder pedal toes.

The RV-6 has a rare distinction in the world of kit built aircraft - it is used as a military training aircraft. Searching for a suitable trainer that could be assembled in Nigeria using local labour, the government of that country settled on the RV-6A. Van's produced 60 kits to fulfill the order and these were assembled in Nigeria, test flown and entered service with the Nigerian Air Force in 1989 as elementary training aircraft under the name "Air Beetle". The RV-6As equip an air training school is based at Kaduna, Nigeria.

The RV-6 and RV-6A have a very active aircraft type club Van's Air Force that provides support for owners and pilots of these types.

A modified version of the RV-6A is manufactured in Iran by the Aviation Industries of Iran as the AVA-202. First flown in 1997, the main change from the RV-6A is a greater wingspan.

Specifications are given for 180HP, O-360 configuration.