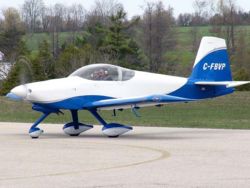 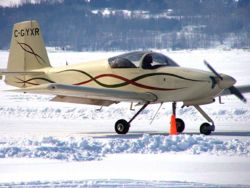 An RV-9A – the nose wheel equipped version of the RV-9 at an ice strip fly-in near Ottawa, Ontario 2005

The Van's RV-9 and RV-9A are two-seat, single-engine, low-wing homebuilt airplanes sold in kit form by Van's Aircraft. The RV-9 is the tail-wheel equipped version while the RV-9A features a nose-wheel. The RV-9 is a development of the RV-6 and RV-7 and is externally similar to both those designs.

The architect of the line of Van’s aircraft, Richard VanGrunsven, designed the RV-9 as a departure from the concepts of the earlier RV series. The earlier members of the RV series, starting with the single seat RV-3, were all designed to have light handling, aerobatic capabilities along with fast cruise speeds and short field STOL capabilities. The RV-9 was designed from the start as a two-place, side-by-side, touring aircraft and as such it forgoes the aerobatic capabilities and the lighter handling for more stability and economy. As such the design horsepower is 118-160 and the prototype was flown with a Lycoming O-235 powerplant of 118 hp as a proof-of-concept for the lower horsepower.

As a result of the lessons learned over the years in producing the first five RV-series designs and the change in role for this aircraft, the RV-9 design incorporated many changes over previous designs. Compared to the similar RV-7, the RV-9 has a wing of increased span and higher aspect ratio using a Roncz airfoil. The RV-9 has a slow stall speed, comparable to the Cessna 150, and docile handling suitable for low-time pilots. The cruise speed is a very respectable 167 mph TAS even with the 118 hp engine.

The RV-9 shares many common parts with the RV-7 and the RV-8 which reduces production costs. Like those aircraft, the RV-9 uses computer assisted design to produce a kit with pre-drilled rivet holes, thus greatly reducing assembly time for the builder.

The RV-9 is unique in Van’s aircraft history in that the tricycle gear RV-9A version was flown first on June 15, 2000, three years before the tail wheel version flew. The later conventional landing gear equipped RV-9 was first flown by its designer in 2002. The RV-9A features tubular steel landing gear with the nosewheel mounting tube welded to the engine mount. As in all nose-wheel equipped RV aircraft, the nosewheel is free castering and the aircraft is steered with differential braking. The brakes are mounted conventionally on the rudder pedal toes.

The RV-9 and RV-9A have a very active aircraft type club Van's Air Force that provides support for owners and pilots of these aircraft.

Specifications are given for 118 hp, O-235 configuration with a fixed pitch propeller