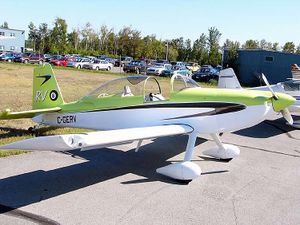 An RV-8 with conventional landing gear at Carp, Ontario. 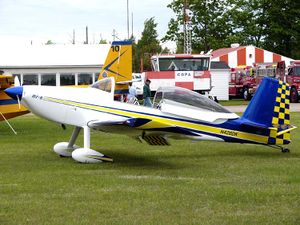 An RV-8 at Smiths Falls, Ontario.

The Van’s RV-8 is a tandem two-seat, single-engine, low-wing homebuilt aircraft sold in kit form by Van’s Aircraft. The RV-8 is equipped with conventional landing gear, while the RV-8A version features tricycle landing gear. The design is a larger development of the RV-4, and is similar in appearance to the earlier model.

Richard VanGrunsven designed the RV-8 series as an improved RV-4, itself a two-seat version of the single seat RV-3. The RV-8 first flew in 1995 and was first shown publicly at Oshkosh that year.

The RV-8 incorporated many changes as a result of lessons learned over the years in producing the immensely popular RV-4 design. The RV-8 airframe will accept larger engines, including the Lycoming IO-360, up to 200 hp. The RV-8 also has increased wingspan and wing area over the RV-4, as well as more cockpit width, headroom, legroom and an increased useful load, all with a view to accommodating larger pilots. Like all other RV series aircraft, except the RV-9 and 10, the RV-8 series are stressed for aerobatics.

The RV-8 shares many common parts with the RV-7 and RV-9 which reduces production costs. Like the RV-7, the RV-8 uses computer assisted design to produce a kit with pre-drilled rivet holes, thus greatly reducing assembly time for the builder.

The RV-8 was intended from the start to have a nose-gear stablemate designated the RV-8A. The RV-8A was first flown in 1998 and features tubular steel landing gear with the nosewheel mounting tube welded to the engine mount. As in all nose-wheel equipped RV aircraft, the nosewheel is free castering and the aircraft is steered with differential braking. The brakes are mounted conventionally on the rudder pedal toes.

The RV-8 and RV-8A have a very active aircraft type club Van's Air Force that provides support for owners and pilots of these types.

Specifications are given for 200HP, IO-360 configuration with a Hartzell constant speed propeller