The Northrop Grumman (formerly Ryan Aeronautical) RQ-4 Global Hawk (known as Tier II+ during development) is an unmanned aerial vehicle (UAV) used by the US Air Force as a surveillance aircraft.

In role and design, it is somewhat similar to the Lockheed U-2, the venerable 1950s spy plane. It is a theater commander's asset to both provide a broad overview and systematically target surveillance shortfalls. The Global Hawk air vehicle is able to provide high resolution Synthetic Aperture Radar (SAR)—that can penetrate cloud-cover and sandstorms—and Electro-Optical/Infrared (EO/IR) imagery at long range with long loiter times over target areas. It can survey as much as 100,000 square kilometers (40,000 square miles) of terrain a day. If a Global Hawk were flown out of San Francisco, it would be able to operate in Maine for 24 hours, observe a 370 x 370 kilometer (230 x 230 mile) grid, and then fly back home.

Potential missions for the Global Hawk cover the spectrum of intelligence collection capability to support forces in worldwide peace, crisis, and wartime operations. According to the Air Force, the capabilities of the aircraft will allow more precise targeting of weapons and better protection of forces through superior surveillance capabilities.

The Global Hawk is the first UAV to be certified by the FAA to file its own flight plans and use civilian air corridors in the United States with no advance notice.[1] This potentially paves the way for a revolution in unmanned flight, including that of automatically piloted passenger airliners.

The RQ-4 is powered by an Allison Rolls-Royce AE3007H turbofan engine with 31.4 kN (3,200 kgf / 7,050 lbf) thrust, and carries a payload of 900 kilograms (2,000 pounds). The fuselage is mostly of conventional aluminum airframe construction, while the wings are made of carbon composite.

The Integrated Sensor Suite (ISS) is provided by Raytheon and consists of a synthetic aperture radar (SAR), electro-optical (EO), and infrared (IR) sensors. Either the EO or the IR sensors can operate simultaneously with the SAR. Each of the sensors provides wide area search imagery and a high-resolution spot mode. The SAR has a ground moving target indicator (GMTI) mode, which can provide a text message providing the moving target's position and velocity. Both SAR and EO/IR imagery are processed onboard the aircraft and transmitted to the MCE as individual frames. The MCE can mosaic these frames into images prior to further dissemination.

Navigation is via inertial navigation with integrated Global Positioning System updates. Global Hawk is intended to operate autonomously and "untethered" using a satellite data link (either Ku or UHF) for sending sensor data from the aircraft to the MCE. The common data link can also be used for direct down link of imagery when the UAV is operating within line-of-sight of users with compatible ground stations.

The ground segment consists of a Mission Control Element (MCE) and Launch and Recovery Element (LRE), provided by Raytheon. The MCE is used for mission planning, command and control, and image processing and dissemination; an LRE for controlling launch and recovery; and associated ground support equipment. (The LRE provides precision differential global positioning system corrections for navigational accuracy during takeoff and landings, while precision coded GPS supplemented with an inertial navigation system is used during mission execution.) By having separable elements in the ground segment, the MCE and the LRE can operate in geographically separate locations, and the MCE can be deployed with the supported command's primary exploitation site. Both ground segments are contained in military shelters with external antennas for line-of-sight and satellite communications with the air vehicles.

The Global Hawk carries the "Hughes Integrated Surveillance & Reconnaissance (HISAR)" sensor system. HISAR is a lower-cost derivative of the ASARS-2 package that Hughes developed for the Lockheed U-2. HISAR is also fitted in the US Army's RC-7B Airborne Reconnaissance Low Multifunction (ARLM) manned surveillance aircraft, and is being sold on the international market. HISAR integrates a SAR-MTI system, along with an optical and an infrared imager. All three sensors are controlled and their outputs filtered by a common processor. The digital sensor data can be transmitted at up to 50 Mbit/s to a ground station in real time, either directly or through a communications satellite link.

The SAR-MTI system operates in the X-band and provides a number of operational modes:

The visible and infrared imagers share the same gimballed sensor package, and use common optics, providing a telescopic close-up capability. The Global Hawk is also fitted with a "self-protection" countermeasures suite to help it frustrate adversary air defenses, and can be optionally fitted with an auxiliary SIGINT package.

In September 2006, testing began on a new specialty radar system, the Multi-Platform Radar Technology Insertion Program, or MP-RTIP, onboard the Scaled Composites Proteus. Once validated, one Global Hawk will be modified to carry this radar set, and the other, larger variant (known as the Wide-Area Surveillance or WAS sensor) will be installed on the Air Force E-10 MC2A testbed or E-8 Joint STARS aircraft. 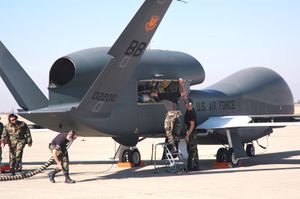 The first seven aircraft were built under the Advanced Concept Technology Demonstration (ACTD) program, in order to evaluate the design and its capabilities. Due to world circumstances, the capabilities of the aircraft were in high demand, so the prototype aircraft were operated in theater in the 2001 invasion of Afghanistan.

In an unusual move, the aircraft entered initial low-rate production concurrently while still in engineering and manufacturing development. Nine production Block 10 aircraft (sometimes referred to as RQ-4A configuration) were produced, two of which were transferred to the Navy (see below). Two more were sent to Iraq to support operations there. The final Block 10 aircraft was delivered on June 26, 2006.[5]

In order to increase the aircraft's capabilities, the airframe was redesigned, with the nose section and wings being stretched. The changes, sometimes referred to with the designation RQ-4B, allow the aircraft to carry up to 3,000 pounds of internal payload. These changes were introduced with the first Block 20 aircraft, the 17th Global Hawk produced, which was rolled out in a ceremony on August 25, 2006.[6] Blocks 30 and 40 are also due to be the larger aircraft.[7]

Program development cost overruns had put the Global Hawk system at risk of cancellation. Per-unit costs in mid-2006 were 25% over baseline estimates, caused by both the need to correct design deficiencies as well as increase the system's capabilities. This caused some concerns about a possible congressional termination of the program if its national security benefits could not be justified.[8][9] However, in June 2006, the Global Hawk program was restructured. Completion of operational assessment was slipped from June 2006 to March 2007, and production of the 54 air vehicles planned has been extended by two years to 2015.[10]

The U.S. Navy took delivery of two of the Block 10 aircraft to be used to evaluate maritime surveillance capabilities, designated N-1. The initial example, tail number 166509, was tested in a naval configuration at Edwards Air Force Base for several months, later ferrying to NAS Patuxent River on March 28, 2006 to begin the Global Hawk Maritime Demonstration (GHMD) program. Navy squadron VX-20 was tasked with operting the GHMD system.[11][12] [13]

In the spring of 2006, the GHMD aircraft took part in a demonstration of the type's ability to conduct maritime drug interdiction surveillance, completing four flights over the Caribbean and off the coast of Florida, locating and identifying numerous airborne and surface targets.[14]

The GHMD aircraft flew in the Rim of the Pacific (RIMPAC) exercise for the first time in July, 2006. Although RIMPAC operations were in the vicinity of Hawaii, the aircraft was operated from Edwards, requiring flights of approximately 2,500 miles each way to the operations area. Four flights were performed, resulting in over 24 hours of persistent maritime surveillance coordinated with USS Abraham Lincoln and Bonhomme Richard. As a part of the demonstration program, Global Hawk was tasked with maintenance of maritime situational awareness, contact tracking, and imagery support of various exercise operations. The imagery obtained by Global Hawk was transmitted to NAS Patuxent River for processing before being forwarded on to the fleet operations off Hawaii, thus exercising the global nature of this aircraft's operations.[15]

Once the Air Force has finished with the ATCDs, the aircraft are due to be transferred to NASA for use by the NOAA. The plan is to attach probes, which contain weather analysis instruments, to the wings of the Global Hawk and drop them at high altitudes every day for 10 years to collect evidence for global warming. 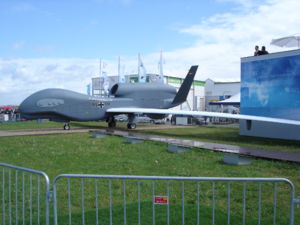 The German Luftwaffe has been investigating a variant of the RQ-4B equipped with European sensors, dubbed EuroHawk. It would combine a normal RQ-4 airframe with an EADS reconnaissance payload.

The aircraft is based on the Block 20/30/40 RQ-4B, but will be equipped with EADS' ELINT package to fulfil Germany's desire to replace their aging Dassault-Breguet Atlantique electronic surveillance aircraft. A first batch of 5 EuroHawks will be delivered for the Luftwaffe from 2010 on.

Canada is also a potential customer, looking at the Global Hawk for maritime and land surveillance as either a replacement for its fleet of CP-140 Aurora patrol aircraft or to supplement manned patrols of remote Arctic and maritime environments.

Scaled Composites and Northrop Grumman are also offering a 50% proportional shrink of the RQ-4A, currently known as the Model 396, as part of the USAF Hunter-Killer program.

Global Hawk ATCD prototypes have been used in the 2001 invasion of Afghanistan and in the 2003 invasion of Iraq. While their data-collection capabilities have been praised, the aircraft did suffer a high number of accidents, with two of the aircraft, more than one quarter of the aircraft used in the wars, being lost. According to Australian press reports, the crashes were due to "technical failures or poor maintenance", with a failure rate per hour flown over 100 times higher than the F-16 fighters flown in the same wars. The manufacturers stated that it was unfair to compare the failure rates of a mature design to that of a prototype plane, and pointed to a lack of trained maintenance staff and spare parts.

On April 24 2001 a Global Hawk flew non-stop from Edwards Air Force Base in the US to RAAF Base Edinburgh in Australia, making history by being the first pilotless aircraft to cross the Pacific Ocean. The flight took 22 hours.[17]

The Global Hawk Maritime Demonstration program has seen two aircraft delivered to the United States Navy, with the second making a delivery flight in December 2006 to its duty station at NAS Patuxent River in Maryland. The two aircraft are involved in a program to develop sensors, operational tactics, and procedures for integrating operations with manned aircraft at sea, for use in a maritime surveillance role[18].

This article contains material that originally came from the web article Unmanned Aerial Vehicles by Greg Goebel, which exists in the Public Domain.