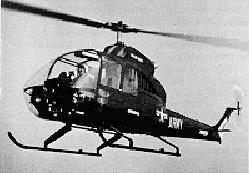 The Fairchild Hiller FH-1100 is a light helicopter produced mainly in the 1960s. It was a civil version of the YOH-5A entrant in the US Army's LOH competition.

Bell produced 5 prototype aircraft in 1962 to submit to the Army for the Test and Evaluation phase. That same year, all aircraft began to be designated according to the new Joint Services designation system, so the prototype aircraft were redesignated as YOH-4A. During the testing phase, the test pilots complained about the power problems of the aircraft, an issue that apparently knocked it out of the running, because when the winners were announced to progress on to the final selection phase, Bell's YOH-4A wasn't selected.[5]

After the failed military contract bid, Bell attempted to market the model 206, but it didn't fare well at all commercially. Bell's market research showed that it was the body design that customers found mostly unpalatable. When Bell redesigned the body of the airframe to a more sleek and aesthetic design and reintroduced it as the Model 206A, the JetRanger was born and Bell found they had a commercial success on their hands.[6]