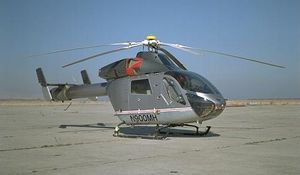 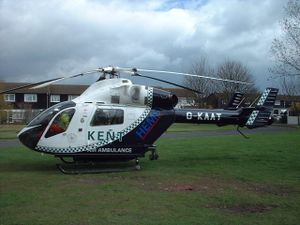 The MD Helicopters MD Explorer is a light twin utility helicopter. Designed in the early 1990s by McDonnell Douglas Helicopter Systems, it is currently produced by MD Helicopters, Inc.

One of the most advanced helicopters in its market segment, the MD Explorer features Boeing's unique NOTAR anti torque system, with benefits including increased safety, far lower noise levels and performance and controllability enhancements.[1] Instead of an anti-torque tail rotor, a fan exhaust is directed out slots in the tail boom, using the Coandă effect for yaw control. Boeing retains the design rights to the NOTAR technology despite selling the former McDonnell Douglas civil helicopter line to MD Helicopters in early 1999.

Initial Explorers were powered by two Pratt & Whitney Canada PW206Bs (the Explorer was the first application for the PW200 series), while plans to offer the Turbomeca Arrius as an option were dropped.[1] In September 1997 a range of improvements were introduced, including PW206E turboshafts with higher single engine inoperative ratings, revised engine air inlets, improved NOTAR inlet design and a more powerful stabiliser control system. Benefits include improved range and endurance and an increased max takeoff weight. This enhanced Explorer was unofficially designated the MD 902.

From September 2000 the Explorer has been delivered with the further improved PW207E turboshaft, with improved hot and high and one engine inoperative performance.[1]