The Embraer ERJ 145 family of regional jets are produced by Embraer, a Brazilian aerospace company. Family members include the ERJ 135, ERJ 140, ERJ 145, and Legacy. The ERJ 145 is the largest of the group. Each jet in the series is powered by two turbofan engines. The family's primary competition comes from the Canadair Regional Jet. 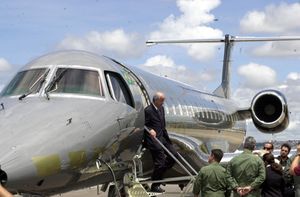 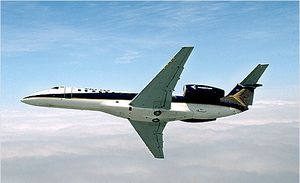 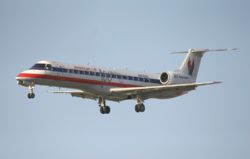 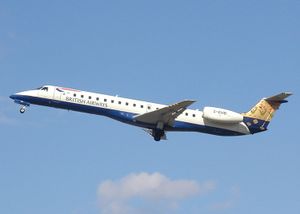 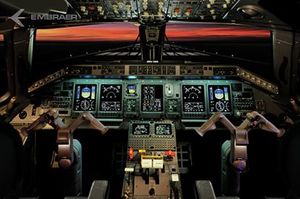 The ERJ 145 was launched at the Paris Airshow in 1989 as a stretched and turbofan-powered modification of the EMB 120 Brasilia. Key components of this design included:

By 1990, Embraer engineers found that the result of wind-tunnel testing was safisfactory, and began considering a significantly different design from the EMB 120. A modified design was proposed which included:

The second design showed better performance in wind tunnel testing, but the combination of swept wings and wing-mounted engines required an undercarriage which was significantly higher than previous iterations. The design evolved until late 1991, at which time it was frozen. Though the aircraft went through many alterations before it was finalized, it did retain a few of the original influences of the EMB 120 such as the three abreast seating (2+1) configuration. The key features of the production design included:

The ERJ 140 is based on the ERJ 145 with 96% parts commonality and the same crew-type rating. The only significant changes are a shorter fuselage, a slightly de-tuned engine and an increased range. At launch, Embraer estimated the cost of an ERJ 140 to be approximately $15.2 million U.S. dollars. The estimated cost of development of the ERJ 140 was $45 million US dollars. The ERJ 135, with an entry into service date of 1999, has 95% parts commonality with the ERJ 145, but is 11.7 feet (3.6 m) shorter.

The ERJ 145 seats 50 passengers, while the ERJ 140 seats 44, and the ERJ 135 seats 37. The ERJ 140 was designed with fewer seats in order to meet the needs of airlines based in the United States which have an agreement with the pilot's union as to the number of 50 seat aircraft that can be operated.

In 2003, Embraer entered a partnership with the Harbin Aviation Industry Group of Harbin, China. The resulting company, Harbin Embraer, began producing the ERJ 145 for the Chinese market by assembling kits premanufactured by other worldwide Embraer operations.

The first flight of the ERJ 145 was on 11 August, 1995, with the first delivery in December 1996 to ExpressJet Airlines (then the regional division of Continental Airlines). ExpressJet is the largest operator of the ERJ 145, with 270 of the nearly 1000 ERJ 145s in service. The second largest operator is American Eagle, with 206 ERJ 145 aircraft. Chautauqua Airlines also operates 95 ERJ 145s through its alliances with American Connection, Delta Connection, US Airways Express, Continental Express, and United Express. By some accounts, the ERJ 145 has a cost of ownership of about $2,500,000 per year.

As of early 2005, 74 ERJ 140s had been built. Though the marketing designation for this aircraft is ERJ 140LR, Embraer's internal designation, and also that of FAA certification, is EMB 135KL.

The ERJ 140 was introduced in September of 1999, first flew on June 27, 2000 and entered commercial service in July of 2001. American Eagle Airlines, the regional jet subsidiary of American Airlines, operates the majority of the ERJ 140s built. Mesa Airlines, and Chautauqua Airlines also operate the ERJ 140. 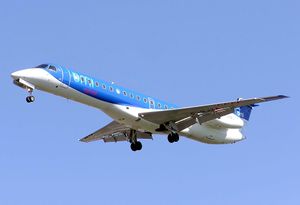 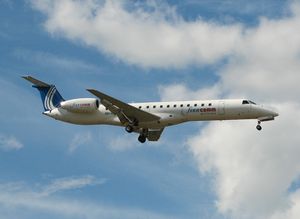 Since production began in 1995, Embraer has produced design modifications.

NOTE: The physical engines are the same (Rolls Royce Allison AE3007), however, the FADEC (Full Authority Digital Engine/Electronic Control) logic is what differs between the various models in regards to total thrust capability.

The extended range version, the ERJ-145ER, has Rolls Royce AE 3007A engines rated at 31.3kN with the option of more powerful AE 3007A1 engines. A, A1, A1P models are mechanically identical but differ in thrust due to variations in FADEC software. The A1E engine, however, has not only new software, but significantly upgraded mechanicals "The long range ERJ-145LR aircraft is equipped with Rolls Royce AE 3007A1 engines which provide 15% more power. The engines are flat rated at 33.1kN to provide improved climb characteristics and improved cruise performance in high ambient temperatures.

Despite the multiple variants, a single type rating for the ERJ135/140/145 will allow pilots to fly this fleet. Companies like ExpressJet Airlines utilise this benefit with their mix-fleet of ERJ135ER/LR and ERJ145EP/LR/XR. Shared type ratings of aircraft allow companies to save on expensive plot training, making the Embraer fleet even more attractive to prospective buyers. Other companies, such as Airbus, have made this more common than before; Boeing, on the other hand, has not been as successful with this concept.

The ERJ 145 family of aircraft has an outstanding service record with no reported crashes or fatalities due to mechanical malfunction. There have been a small number of reported incidents involving the ERJ 145. In one case a Rio-Sul pilot descended beyond the normal rates and landed at a speed significantly higher than the normal landing speed. This aircraft tail section bent and was dragged along the runway. In the other case, a Continental Express (ExpressJet) flight overran a Cleveland runway in blizzard conditions; there were no injuries and the aircraft was returned to service. Another ExpressJet aircraft crashed on takeoff in Beaumont, Texas during a training flight; that aircraft was a total loss, but again no injuries were sustained.

On May 2, 2006 two ERJ 145s were involved in separate incidents at two U.S. airports. The first incident involved a Continental Express jet blowing a tire on its left-side landing gear on takeoff at Bush Intercontinental Airport in Houston, Texas. The plane landed safely with no injuries.[2] The second incident involved a American Eagle flight which also blew out a tire on takeoff at Chicago's O'Hare International Airport. The plane skidded off the runway coming to rest 25 feet away in the grass. There were no injuries reported.[3].

A BA Citiexpress Aircraft overshot the runway at Hannover on landing with no injuries to passengers or crew. On June 18, 2006, another incident involved a Continental Express (ExpressJet) ERJ 145. Flight 2482 from Corpus Christi, TX (CRP) to Houston Intercontinental (IAH), made an emergency landing in Victoria, TX after an engine fire filled the lavatory and cabin with smoke. [4]