The Kaman SH-2 Seasprite was a United States Navy ship-based helicopter with anti-submarine, anti-surface threat capability, including over-the-horizon targeting. This aircraft extends and increases shipboard sensor and weapon capabilities against several types of enemy threats, including submarines of all types, surface ships, and patrol craft that may be armed with anti-ship missiles.

The H-2 originally entered Naval service as the Kaman HU2K-1, a single-engine light utility helicopter primarily deployed aboard aircraft carriers in a Search-and-Rescue (SAR) role. When the aircraft numbering system was changed in 1962, the HU2K-1 was redesignated the UH-2A and the HU2K-1U was redesignated UH-2B. The airframe continued to undergo upgrades, most significantly the addition of a second engine and external stores stations.

The HH-2D was selected to be the airframe for the Light Airborne Multi-Purpose System (LAMPS) when the program was stood up in 1972. LAMPS evolved in the late 60's from an urgent requirement to develop a manned helicopter that would support a non-aviation ship and serve as its tactical Anti-Submarine Warfare arm. Known as LAMPS Mk I, the advanced sensors, processors, and display capabilities aboard the helicopter enabled ships to extend their situational awareness beyond the line-of-sight limitations that hamper shipboard radars and the short distances for acoustic detection and prosecution of underwater threats associated with hull-mounted sonars. H-2s reconfigured for the LAMPS mission were redesignated SH-2D. The first operational SH-2D/LAMPS helicopter embarked on the USS Belknap (CG-26) in December 1971.

Eventually all but two H-2s then in Navy inventory were remanufactured into SH-2Fs, and 59 SH-2Fs were built new in the 1980s. The final production procurement of the SH-2F was in Fiscal Year 1986. The SH-2F was retired from active service in October 1993, at roughly the same time that the Navy retired and/or sold the last of its (Viet Nam era) Knox Class Frigates that could not accommodate the newly acquired (and larger) SH-60 Sea Hawk. Some late-production SH-2Fs were either completed as, or have been converted to, the upgraded SH-2G Super Seasprite variant.

The final variant of the SH-2F type took place in 1987 when several aircraft were up-fitted with chin mounted Forward Looking Infrared Sensors (FLIR), Chaff (AIRBOC)/Flares, dual rear mounted IR scramblers, Missile/Mine detecting equipment and M-60D machine guns mounted on both sides of the aircraft. They were utilized to enforce Operation Ernest Will (July, 1987) and later Operation Praying Mantis (April, 1988) and Desert Storm (Jan 1991) in the Persian Gulf region. The added countermeasures and equipment gave the SH-2F's enhanced survivability while taking on more surface related combat tasking in an environment of limited submarine threat. The SH-2F was infamous with Naval aircrew for its high accident rate and dismal 30+ maintenance-hour-per-flight-hour requirement, the highest of any aircraft in the Navy at the time this type was retired from active service. Many of the accidents and maintenance costs were attributed to the severe environment in which this aircraft was operated.[citation needed]

In 1997, Australia signed a $A 667 million contract with Kaman to purchased 11 upgraded SG-2G(A) Super Seasprites, with a modern avionics package fitted to old SH-2F airframes. [1] The first helicopter was unveiled in 2003, and as of February 2007, 10 of the 11 helicopters, intended to work with the Anzac class frigates, had been delivered to the Royal Australian Navy's Fleet Air Arm. [2] [3] However, up to 40 deficiencies had beed identified in the helicopters operated by 805 Squadron as early as 2005, including their inability to operate in bad weather and low-light conditions, and the inability to meet Australian airworthiness certification standards. [2] The problems, attributed to the attempt to fit a late-1990s avionics package to a 1960s airframe, led to the restriction of the helicopters to "passenger and supply transport in good weather" in 2005, and the complete grounding of the squadron in May 2006. [2] [4]

In February 2007, The Australian ran an article announcing that the Seasprite project is "almost certain to be scrapped". [3] By this point, the project was running six years over schedule, and the cost of the project had blown out to $A 1.1 billion, with $A 45 million in additional costs if the decision is made to upgrade the helicopters was made. [3] If approved, the upgrade would take a further 29 months, with the squadron not reaching full operational status until at least 2010. [3] Scrapping or selling on the helicopters is an option also under consideration, with possible replacements including purchse of the NHIndustries NH90, or expansion of the number of S-70 Seahawks currently in serice. [3]

In 1995, the Arab Republic of Egypt contracted for 10 SH-2G aircraft in a dipping sonar configuration. The first deliveries under this program took place in 1997. 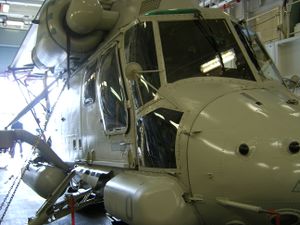 A SH-2G inside HMNZS Te Mana 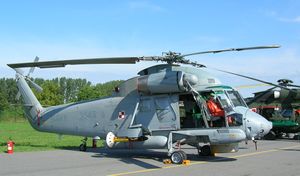 New Zealand purchased 5 SH-2G at the same time as Australia, but with different avionics, and the New Zealand aircraft were new-build airframes, not rebuilt American SH-2Fs. The SH-2G purchase was completed NZ$12 million under the $338 million budgeted (excluding GST). The first RNZAF SH-2G was delivered in mid-2001, the last was delivered February 2003.

The Royal New Zealand Navy operates the type from its two Anzac class frigates. When new patrol and support vessels are delivered in 2006 and 2007 it will also operate from those. They were initially operated by No. 3 Squadron RNZAF, but now form No. 6 Squadron RNZAF.

Prior to receiving SH-2Gs, the RNZN replaced Westland Wasp with SH-2Fs. RNZN Seasprites have seen service in East Timor. An SH-2F is preserved in the Royal New Zealand Air Force Museum.

The Polish Navy operates 4 of these aircraft, which were included in the purchase of two Perry class frigates from the United States Navy, now operating as ORP Generał Tadeusz Kościuszko and ORP Generał Kazimierz Pułaski.

Data from The International Directiory of Military Aircraft[5]