The Douglas DC-3 is a fixed-wing, propeller-driven aircraft whose speed and range revolutionized air transport in the 1930s and 1940s. Because of its lasting impact on the airline industry and World War II, it is generally regarded as one of the most significant transport aircraft ever made.

The DC-3 was engineered by a team led by chief engineer Arthur E. Raymond, and first flew on December 17, 1935 (the 32nd anniversary of the Wright Brothers flight at Kitty Hawk). The plane was the result of a marathon phone call from American Airlines CEO Cyrus Smith to Donald Douglas requesting the design of an improved successor to the DC-2. The amenities of the DC-3 (including sleeping berths on early models and an in-flight kitchen) popularized air travel in the United States. With only three refueling stops, eastbound transcontinental flights across America taking approximately 15 hours became possible. Westbound trips took 17 hours 30 minutes - still a significant improvement over the competing Boeing 247. Before the arrival of the DC-3, such a trip would entail short hops in commuter aircraft, during the day, coupled with train travel overnight. 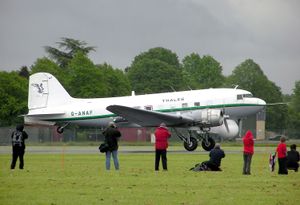 A Douglas DC-3 (a former military C-47B) of Air Atlantique taking off at Hullavington airfield, England

Early U.S. airlines like United, American, TWA and Eastern ordered over 400 DC-3s. These fleets paved the way for the modern American air travel industry, quickly replacing trains as the favored means of long-distance travel across the United States. Piedmont Airlines operated DC-3s from 1948 to 1963. One of Piedmont's DC-3s, operated by the Carolinas Aviation Museum, continues to fly to air shows today and has been used in various movies.

During World War II, many civilian DC-3s were drafted for the war effort and nearly 10,000 military versions of the DC-3 were built, under the designations C-47, C-53, R4D and Dakota. Peak production of the type was reached in 1944 with 4853 being delivered. The armed forces of many countries used the DC-3 and its military variants for the transport of troops, cargo and wounded. Licensed copies were built in Japan as Showa L2D (487 aircraft) and in the USSR as the Lisunov Li-2 (between 2200 and 4900 aircraft, per varying sources). 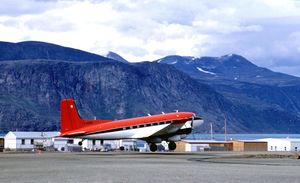 After the war, thousands of surplus C-47s were converted to civil service and became the standard equipment of almost all the world's airlines, remaining in front-line service for many years. The ready availability of ex-military examples of this cheap, easily-maintained aircraft (it was both large and fast by the standards of the day) jump-started the worldwide, post-war air transport industry.

Douglas had developed an improved version, with a greater cargo capacity and a different wing, which it attempted to sell during this time frame but with all these surplus aircraft, the Super DC-3 did not sell in the civil market. The US Navy had 100 of their early R4Ds converted to Super DC-3 standard as the R4D-8, later C-117D.

Numerous attempts were made to design a "DC-3 replacement", over the next three decades (including the very successful Fokker Friendship) but no single type could match the versatility, rugged reliability and economy of the DC-3 and it remained a significant part of air transport systems, well into the 1970s. Even today, over 70 years after the DC-3 first flew, there are still small operators with DC-3s in revenue service and as cargo planes. The common saying among aviation buffs and pilots is that "the only replacement for a DC-3 is another DC-3." The aircraft's legendary ruggedness is enshrined in the lighthearted description of the DC-3 as "a collection of parts flying in loose formation." Its ability to start and land on grass or dirt runways also makes it popular in developing countries, where the runways may not always be a paved surface.

Some of the more common uses of the DC3 have been aerial spraying, freight transport, passenger service, military transport and sport skydiving shuttling.

A Swedish C-47 (Swedish designation Tp79) was shot down over the Baltic Sea in June 1952. This was part of an international incident (see the Catalina affair).

10,655 DC-3s were built at Santa Monica, California and Long Beach, California in both civil and military versions. Over 2000 were built in Russia, under license, as the Lisunov Li-2 (NATO reporting name: Cab). 485 were built in Japan, as the L2D Type 0 transport. More than 400 remained in commercial service, in 1998.

A wide variety of engines was fitted to the DC-3 throughout the course of production. The most popular was the Pratt & Whitney R-1830 Double Wasp radial, but both the Wright R-1820 Cyclone and the Pratt & Whitney R-2000 radials saw use. Some DC-3s were upgraded to use Rolls-Royce Dart or Armstrong Siddeley Mamba turbines.

The Basler BT-67 is a derivative type of the DC-3. Basler refurbishes DC-3s, fitting them with PT-6 turbo-prop engines, lengthening the fuselage by over 3 feet and strengthening the airframes in selected areas. 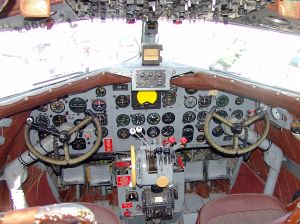 Cockpit of DC3 operated by FAA to verify operation of navaids (VORs & NDBs) along federal airways.