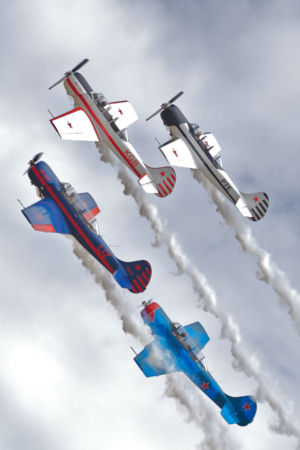 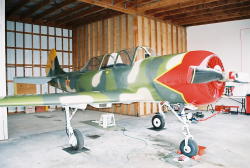 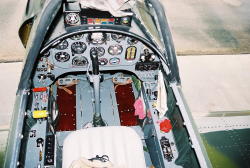 The Yakovlev Yak-52 is a Soviet primary trainer aircraft. It first flew in 1976 and is still being produced in Romania, by Aerostar. The Yak-52 was designed originally as an aerobatic trainer for students in the Soviet DOSAAF training organization. That organization trained both civilian sport pilots and military pilots.

Since the early 1990s and the fall of the Soviet Union, many Yak 52s have been exported to the west. Of the approximately 1,800 produced to date, most now fly in the United States, United Kingdom, New Zealand, Australia and other western countries.

A descendant of the single-seat competition aerobatic Yakovlev Yak-50, the all-metal Yak-52 is powered by a 360 hp, 9-cylinder radial engine, the Vedeneyev M-14P. The aircraft has inverted fuel and oil systems permitting inverted flight for as long as two minutes. The engine drives a two-bladed counter-clockwise rotating, constant-speed, wood and fiberglass laminate propeller.

At 2,200 pounds empty weight, the Yak-52 is responsive and very capable as an aerobatic aircraft. Yet it is also easy to fly and land. It has been used in international aerobatic competition up to the Advanced level. It is stressed to +7 and –5 Gs, rolls (to the right) at 180 degrees per second and is capable of every maneuver in the Aresti catalog.

The Yak-52, like most Soviet military aircraft, was designed to operate in rugged environments with minimal maintenance. One of its key features, and a radical departure from most western aircraft, is its extensive pneumatic system. Engine starting, landing gear, flaps, braking and steering are all pneumatically actuated. The steering/braking arrangement, especially, takes some adjustment for flyers accustomed to hydraulics, because the plane uses differential braking controlled by rudder pedals and a hand operated lever on the control stick.

The landing gear is fully retractable, but it remains partially-exposed in the retracted position, affording both a useful level of drag in down maneuvers and a measure of protection should the plane be forced to land "wheels up."

A number of "westernised" versions of the Yak-52 are now produced. The replacement of the existing Soviet avionics, fitting of a three-blade aerobatic propeller (Yak-52W) and conversion to conventional "tail-dragger" landing gear (Yak-52TW) are the major modifications to the standard aircraft. There is also a Yak-52TD version where the TD stands for Tail dragger. This aircraft looks like a small Yak-11.

On April 16, 2004, a modernized variant Yak-52M was flown in Russia. It is fitted with modernized engine M-14Kh, three-blade propeller, ejector seats and other modifications. It is expected, that some of Russian aircraft will be modified to this standard.