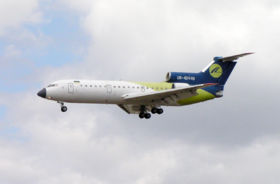 The three-engined Yakovlev Yak-42 (NATO reporting name: Clobber) was designed as a replacement for the twin engined Tupolev Tu-134 jet. It fulfills a role similar to that of the Boeing 727 as a mid-range passenger jet. The Yak-42 was also the first airliner to be produced in the Soviet Union to be powered by modern high-bypass turbofan engines.

To save design time, Yakovlev started with the Yak-40, making it larger and sweeping back the wings, with an 11-degree sweep prototype being rejected in favor of a 23-degree sweep. The Yak-42 was built at Smolensk, and it entered service with Aeroflot in late 1980. Almost 100 had been delivered by 1993.

Shortly after the type's introduction into commercial service, a number of accidents caused by vibrations in the tail section of the aircraft forced a suspension of the type's operations. After the necessary modifications were made, the Yak-42 re-entered service in the Soviet Union circa 1985. 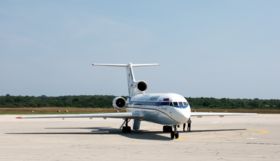 The type was never exported, and only after the political transition of the former Soviet Union, a few Yak-42s were leased out to carriers in Africa, Cuba, Pakistan and in former Yugoslavia.

Current models include the Yak-42 base version, the Yak-142 with a higher gross weight, and the Yak-42D-100 with western avionics that never entered serial production. Late in 1997, Yakovlev announced the development of the Yak-42A, an improved version of the Yak-42D featuring a higher range and a modernised cabin interior.

The Yak-42 became infamous in Spain when on 26 May 2003 an Ukrainian-Mediterranean Airlines Yak-42-D crashed near Macka, Trabzon (Turkey) while carrying 62 Spanish troops from Afghanistan to Zaragoza Air Base. All 75 on board died. At the time, the Spanish presence in the ISAF missions was being very disputed among the Spanish politicians and opinion. There were accusations of the ministry of Defence hiring cheap unfit crafts. The scandal damaged the image of minister Federico Trillo. Furthermore, in 2004 it was revealed that the corpse identification in the Turkish mountains was rushed and several bodies were delivered to the wrong relatives.

The Yak-42 can fly with only 2 engines and continue level flight on one.) each Performance