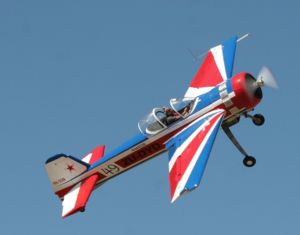 The Yakovlev Yak-55 and 55M(short wing) is an aerobatic aircraft designed by Slava Kondratiev. It has a thick mid-mounted symmetrical wing and is of a conventional monocoque all-metal construction. Undercarriage is fixed with sprung main gear and tailwheel. The engine is a 360 horsepower Vedeneyev M14P.

The prototype first flew in May 1981 and was shown to the West in 1982. However, the Russian aerobatic team did use the aircraft until 1984 when they won the World Aerobatic Championship.

The aircraft has been relatively free of Service Bulletins (Airworthiness Directives), and has proved exceedingly effective in competition at all levels. The obvious capabilities of the aircraft and its success in use, together with the relatively large numbers built (some 250) have meant that owners make relatively few modifications and that few are needed. The cockpit is roomy (but a bit short in leg length) and the aircraft is a delight to fly although some say it is difficult to land neatly. Thus affectionately nicknamed the crop duster.

The SP-55 is a development of the Yak-55 and was released in the late 1990s. The SP-55 incorporates all of the proven structural components of the Yak-55, but, amongst other changes, uses composite flying controls and has a lighter weight giving improved manoeuvrability. When equipped with the M14PF 400 hp engine, the SP-55 has been said to surpass the performance of the Sukhoi SU-31. The SP-55 is manufactured at the Arsenyiev factory in the far East of Russia.