From PlaneSpottingWorld, for aviation fans everywhere
Jump to:navigation, search
This article is about the civil versions of the Bell 204 and 205 models. For the military versions, see UH-1 Iroquois. 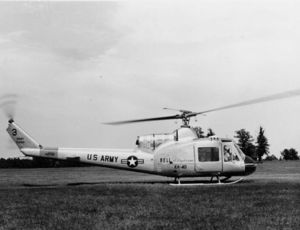 The Bell 204 and 205 are the civil versions of the ubiquitous UH-1 Iroquois military helicopters. These models are used in a wide variety of applications, including crop dusting, cargo lifting, and one of its most common uses, aerial firefighting.

Bell designed its Model 204 in response to a 1955 United States Army requirement for a utility helicopter. The 204 was a giant step forward in helicopter design, being one of the first to be powered by a turboshaft. The turboshaft engine radically improved the practicality of the helicopter due to its light weight and high power to weight ratio, lower fuel consumption, and lower maintenance and operating costs. The use of a turboshaft in the 204 allowed it to carry a useful payload over respectable ranges and at reasonable speeds, which resulted in the 204 and subsequent 205 becoming the most successful western helicopter series in terms of numbers built.[1]

The civil 204B was first delivered in 1961. The subsequent Model 205A-1 is equivalent to the UH-1H, which, compared to the 204, is longer, larger, and has better performance and a more powerful engine.[1]

File:Cdf-b205-N497DF-061027-02cr-16.jpg
California Department of Forestry "Super Huey", formerly an EH-1H, assigned to the Bieber Helitack crew, takes off from the Mojave Airport 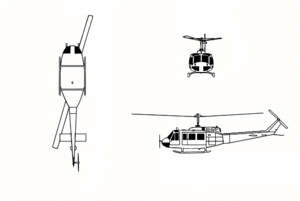