It entered U.S. Military service in late 1946, and would go on to service under a wide variety of versions and designations over 3 decades that followed. Its use in the Korean War (1950-1953) as the H-13 by the United States Army would be among the highlights of its extensive career. 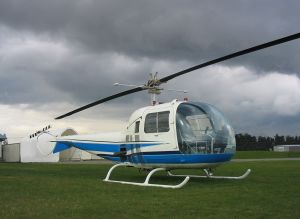 Early Bell 47 models had open cockpits or sheet metal cabins. The most common model, the 47G introduced in 1953, can be recognized by the full bubble canopy, exposed welded-tube tail boom, and saddle fuel tanks. Later 47H and 47J Ranger models had a regular cabin with full cowling and monocoque tail boom. Engines were Franklin or Lycoming horizontally-opposed piston engines of 200 to 305 HP (150 to 230 kW). Seating varied from two to four. Many are still in use as trainers and in agriculture (as of 2005).

The first Bell helicopter to use a turbine engine was a modified Model 47G (designated the XH-13F or Model 201), first flown in October 1954.

NASA had a number of Bell 47s during the Apollo programme, used by astronauts as a trainer for the Lunar Lander. Eugene Cernan had a near disastrous accident shortly before his flight to the moon on Apollo 17 by crashing one into the Indian River. 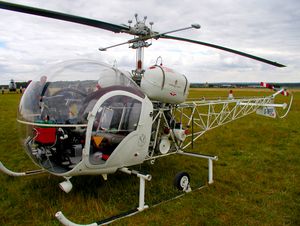 Initially, the US Navy procured several Bell 47s, designated HTL-1, between 1947 and 1958. The US Coast Guard evaluated this model, and procured two HTL-1s for multi-mission support in the New York Harbor. The most common US Navy version of the 47 was designated the HTL-4, and dispenses with the fabric covering on the tail boom. The US Coast Guard procured three HTL-5s in 1952 (similar to the HTL-4 but powered by a Franklin 0-335-5 engine) and used these until 1960.[3]

The British version of the 47G, called by the British Army the Sioux AH.1, was built by Westland Helicopters for use by the Army Air Corps, who used it until the early 1980s.[citation needed] The Sioux military version was often equipped with military evacuation panniers, one to each skid, with a acrylic glass shield to protect the patient from wind.

H-13 were produced in Japan by a Bell and Kawaski venture;this led to the Bell-Kawasaki KH-4 variant, essentially a three seat version of the Model 47.

The Bell 47 was designated under multiple systems, see United States of America military aircraft designation systems. It is best known as the H-13 Sioux, though it actually started as the YR-13 in 1946. It became the H-13 under the USAF, though the USN had called it the HTL.

In post-1962 US designations combinations with the number 13 are often skipped, but in the older system the R-13/H-13 shared the number with the X-13 Vertijet and XP-13 Viper (see List of United States military aircraft)

In 1962 Army, Navy, and Air Force versions were redesignated under the new Tri-service system. Mainly, the H-13 based ones were converted to new standards which included a vehicle type designator and a mission symbol (2 letter prefix; OH, UH, XH, etc. This was a shift from the initial USAF 1948 system (with the numbered carried over from the USAAF/C system) and the USN 1922-1962 system to the new 1962 system.[4] 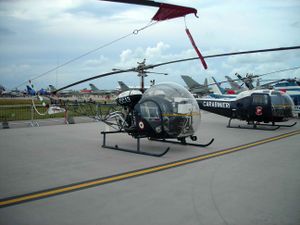 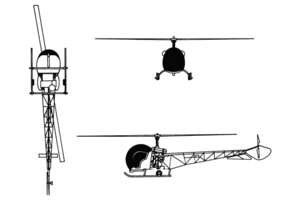 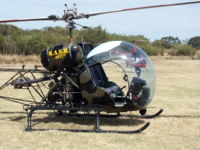 The Bell 47G was used in the 1957–1959 television series Whirlybirds, and later the movie and television series M*A*S*H. It also appeared in the Canadian TV show The Forest Rangers and the Australian TV Show Skippy the Bush Kangaroo. It was added to the permanent collection of the Museum of Modern Art of New York in 1984.