The Bell P-39 Airacobra was one of the principal American fighter aircraft in service at the start of World War II. Although innovative, the P-39 design was handicapped by the lack of an efficient turbo-supercharger, limiting it to low-altitude work, although the type was utilized with great success by the Soviet Air Force.

The P-39's unusual design (for a short period of time, the P-39 was first designated the XP-45) incorporated its V-12 Allison engine mounted in the middle of the fuselage, just behind the cockpit, driving the propeller through a driveshaft passing between the pilot's feet. The main purpose of this configuration was to free up space for the heavy main armament, a 37 mm T9 cannon firing through the center of the propeller hub for optimum accuracy and stability when firing. Although a devastating weapon, it was prone to jamming.[citation needed] A secondary benefit of the mid-engine arrangement was to create a smooth and streamlined nose profile. The weight distribution necessitated a tricycle undercarriage, a first among American fighters. Entry to the cockpit was through side doors (mounted on both sides of the cockpit) rather than a sliding canopy.

The weight distribution of the P-39 supposedly is the reason for its tendency to enter a dangerous flat spin — a characteristic Soviet test pilots were able to demonstrate to the then-skeptical manufacturer who had been unable to reproduce the effect. After extensive tests, it was determined that the spin could only be induced if the plane was improperly loaded, with no ammunition in the front compartment. The flight manual specifically noted that one had to ballast the front ammunition compartment with the appropriate weight of shell casings to achieve a reasonable center of gravity. High speed controls were light ala P-51, thus high speed turns and pull-outs were not the strength test of a P-40 or P-47, never mind the Zero or Me 109! The P-39 had to be held in a dive since it wanted to level out, reminiscent of the Spitfire. Redline dive speed was a respectable 525 mph for the P-39 'Cobra.

The P-39's Allison V-1710 engine had a single-speed, single-stage supercharger, which brought about a decrease of performance compared to the promising prototype fitted with an exhaust-driven turbo-supercharger. The production P-39's heavier weight combined with the poor performance of the Allison engine, limited the high-altitude capabilities of the fighter. The P-39's altitude performance was markedly inferior to the contemporary European fighters and, as a result, the first USAAF fighter units in the European Theater were equipped with the Spitfire V (which coincidentally also featured a single-speed, single-stage supercharger). However, the P-39D's roll rate was 75 degrees per second at 235 mph– better than the A6M2, F4F, F6F or P-38 up to 265 mph. see NACA chart).[citation needed]

Above the V-1710's full throttle height of about 17,000 ft (5,000 m), the P-39's performance dropped off rapidly. This limited its usefulness in traditional fighter missions in Europe as well as in the Pacific, where it was not uncommon for Japanese bombers to attack at altitudes above the P-39's operational ceiling (which in the tropical hot air inevitably was lower than in moderate climates).

A naval version with taildragger landing gear, the XFL-1 Airabonita, was ordered as a competitor to the F4U Corsair and XF5F Skyrocket, but after a troublesome and protracted development and testing period, was rejected by the Navy. 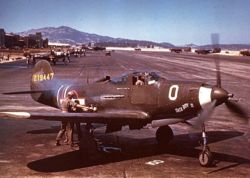 In 1940, the British Direct Purchase Commission in the US was looking for combat aircraft; they ordered 675 of the export version Bell Model 14 on the strength of the company's representations on April 13 1940 as the "Caribou." These would be renamed Airacobra in 1941. A further 150 were specified for delivery under Lend-lease in 1941 but these were not supplied. The Royal Air Force (RAF) took delivery in mid 1941 and found that actual performance differed markedly from what they were expecting. In some areas, the Airacobra was inferior to existing aircraft such as the Hurricane and Spitfire and its performance at altitude was less. On the other hand it was considered effective for low level fighter and ground attack work. Problems with gun and exhaust flash suppression and compass were fixable. The need of the USSR was determined to be greater however and Airacobras already in the UK along with the remainder of the first batch being built in the US were sent to the Soviet Air force. The US then requisitioned 200 of the next part of the order as the P-400. The P-400 designation came from advertised top speed of 400 mph. After Pearl Harbor, the P-400 was deployed to training units, but some saw combat in the Southwest Pacific including with the Cactus Air Force in the Battle of Guadalcanal. [1]

It is mistakenly believed that the Airacobra was used as a ground-attack aircraft by the Soviet Union, the lack of a turbo-supercharger restricting it to low-altitude combat. In fact, the Soviets used it to provide top cover.[1] The tactical environment of the Eastern Front did not demand the extreme high-altitude operations that the RAF and USAAF employed with their big bombers. In the relatively low-altitude operations in the East, the lack of a turbocharger was not as great a handicap. The low-speed, low-altitude turning nature of most air combat on the Russian Front suited the P-39's strengths rather than its inherent weaknesses. The second-highest scoring Allied ace, Pokryshkin, flew the P-39 from late 1942 until the end of the war; his unofficial score in the Airacobra stands at nearly 60 Luftwaffe aircraft.

A total of 9,584 were produced, with over half being sent to the Soviet Union under the Lend-Lease program.

The mid-engine, gun-through-hub concept was developed further in the Bell P-63 Kingcobra.

The Airacobra was raced at the National Air Races in the United States after World War II. Famous versions used for racing included the twin aircraft known as "Cobra I" and "Cobra II," owned jointly between three Bell Aircraft test pilots, Chalmers "Slick" Goodlin, Alvin M. "Tex" Johnston, and Jack Woolams. These craft were extensively modified to use the larger and more powerful P-63 Kingcobra engine and had prototype propeller blades from the Bell factory. "Cobra I" with its pilot, Jack Woolams, was lost in 1946, over the Great Lakes while he was flying from the National Air Races in Cleveland, Ohio back to the factory to get a fresh engine.

The "Cobra II" (Race #84) flown by famed test pilot "Tex" Johnston, beat out P-51 Mustangs and other P-39 racers, which were the favorites, to win the 1946 Thompson Trophy race. Cobra II raced again in the 1947 Thompson Trophy race, finishing 3rd. It raced yet again in the 1948 Thompson trophy race, but was unable to finish owing to engine difficulties. Cobra II did not race again and was destroyed on August 10, 1968 during a test flight prior to a run on the world piston-engine speed record, when owner-pilot Mike Carroll lost control and crashed. Carroll and the highly-modified P-39 perished.

In 1942, an P-39 Airacobra crashed in Fiji, but was not found until a local pig farmer discovered the wreck in 2004. The pilot's body was also found and sent to Hawaii for identification. Personal items were recovered at the site. [2]

A number of P-39s are still in existence of which three are still flying. The Commemorative Air Force flies a Bell P-39 Airacobra painted in the markings and colors of the 350th Fighter Group, which consisted of the 345th, 346th and 347th Fighter Squadrons operating P-39s in North Africa and Italy. At one time, the Airacobra was painted in Russian colors and markings. Bell P-39Q-6-BE USAAF, serial no. 42-19993, "Brooklyn Bum– 2nd" is now at the Fighter Collection in Duxford, UK. The Smithsonian's National Air and Space Museum has P-39Q-15BE, serial no. 44-2433 on display.

The P-39 Airacobra is featured in the Russian movie "Перегон" (Peregon, Transit) [3]dealing with Lend Lease aircraft in transit to Russia. 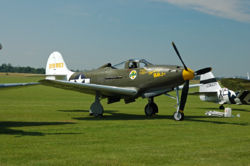