The Bell Model 407 is a civil utility helicopter, a derivative of the Bell 206L-4 LongRanger. The 407 uses a 4-bladed rotor system with a rigid, composite rotor hub instead of the Model 206's 2-bladed conventional rotor. The Bell 407 is frequently used for corporate and offshore transport, as an air ambulance, law enforcement, electronic news gathering and movie making.

In 1993, Bell's began to development the New Light Aircraft as a replacement for its Model 206 series. The program resulted in the 407, an evolutionary development of the Bell 206L-4 LongRanger.[1]

A 206L-3 LongRanger was converted as the concept demonstrator 407 and first flew in this form on April 21, 1994, while the 407 was first publicly announced at the Las Vegas Heli-Expo in January 1995.[1] The first pre-production 407 flew in June 1995, and the first production 407 flew in November 1995. Customer deliveries began the following February.

The Bell 407 features the four blade main rotor developed for the OH-58 (Model 406). The blades and hub use composite construction, have no life limits, and provide improved performance and better ride comfort.[1]

The 407's cabin is also 18cm (8in) wider cabin, increasing internal cabin width and space, and features 35% larger main cabin windows. The more powerful Rolls-Royce (Allison) 250-C47 turboshaft allows an increase in max takeoff weight and improves performance at hotter temperatures and/or higher altitudes. In 1995, Bell studied fitting the 407 with a shrouded tail rotor, but did not proceed.[1]

For a time, Bell studied developing the Model 407T twin, but instead chose to develop the essentially all new twin PW206D powered Bell 427.[1]

The ARH-70 armed reconnaissance helicopter, is being developed for the U.S. Army is based the 407. 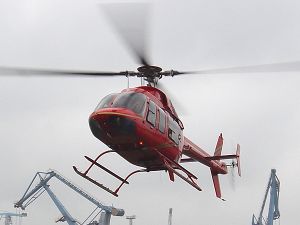 The Bell 417 was a growth variant of the Bell 407, in essence a civil version of the ARH-70 armed reconnaissance helicopter for the US Army. The 417 made its first flight on June 8, 2006.[2] The 417 was to be powered by a Honeywell HTS900 turboshaft engine, producing 970 shp and includes full FADEC controls. The cabin will seat 5 passengers in club-seating configuration, in addition to the crew of two.[3] The civilian 417 was canceled at Heli-Expo 2007 in Orlando,[4] but the ARH-70 will continue production.[5]

Polar First was an around-the-world, pole-to-pole record flight flown by Colin Bodill and Jennifer Murray utilizing a standard Bell 407. The flight originated from Bell's facility at the Fort Worth Alliance Airport on December 5, 2006 and was completed upon the return of the helicopter to the same facility on May 23, 2007. The team flew about Template:Convert over 189 days and 300 flight hours, through 34 different countries. The flight was performed in partnership with the Royal Geographical Society to provide educational outreach to 28 international schools, which were visited during the trip. The project also served as a fundraiser for the SOS Children's Villages.[6] 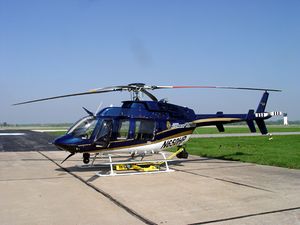 ARH-70
An upgraded 407 version to serve as an armed reconnaissance helicopter.

Bell 417
Planned civil version of the ARH-70, was canceled.

File:Bell 407-rotorhead.jpg
Bell 407 rotorhead. The "box" under the yellow cap contains a FRAHM dampener which reduces 4-per-revolution vibrations.
File:Bell407C-GZRN02.jpg
Helitack 63, a Bell 407 that served as a contract fire flighting aircraft with the Ontario Ministry of Natural Resources during the 2007 fire season.