From PlaneSpottingWorld, for aviation fans everywhere
Jump to:navigation, search
For the road, see A340 road.

The Airbus A340 is a long-range four-engined widebody commercial passenger airliner manufactured by Airbus S.A.S. a subsidiary of EADS. It is similar in design to the twin-engined A330.

The first published studies for the A340 were as the TA11 in 1981, as shown in the November issue of Air International (coinciding with the display of the A300 at that year's Farnborough Air Show). Concept drawings of the A320 (SA 9) and A330 (TA10) were also published, along with estimated performance figures by Airbus Industrie. 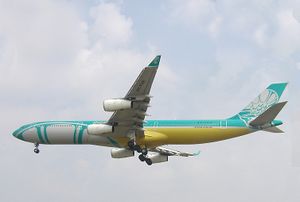 The A340 was launched in June 1987 as a long-range complement to the short-range A320 and the medium-range A300. At the time, Airbus's twinjets were at a disadvantage against aircraft such as the Boeing 747 because of the ETOPS problem: two-engined aircraft had to stay within close range of emergency airfields to allow for engine malfunction. The A340 was designed in parallel with the twin-engined A330: both aircraft share the same wing and similar fuselage structure, and borrow heavily from the advanced avionics developed for the A320. Both the A330 and A340 are assembled on the same final assembly line at Toulouse-Blagnac, France. The four-engined A340 is able to fly long over-water routes. Because of its ETOPS-immunity, Virgin Atlantic Airways used the motto "4 Engines 4 Long Haul," on its A340 fleet. 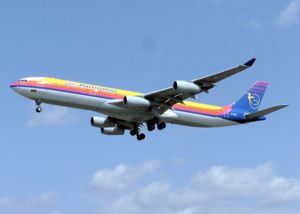 It was originally intended to use the new superfan engines of IAE (International Aero Engines) in the A340 but IAE decided to stop their development and the CFMI CFM56-5C4 was used instead. When the A340 first flew in 1991, engineers noticed a potentially major design flaw in the first model: the wings were not strong enough to carry the outboard engines at cruising speed without warping and fluttering. To alleviate this, an underwing bulge called the plastron, named after the undershell of a tortoise, was developed to correct airflow problems around the engine pylons. The modified A340 began commercial service in 1993 with Lufthansa and Air France.

The A340 incorporates high-technology features such as fully digital fly-by-wire flight control system. It also uses a sidestick controller instead of normal control columns. There is one 'joystick' to the left of the pilot and one to the right of the co-pilot. The A340, as with all Airbus planes, employs a common pilot rating, specially with the two-engined A330. The cockpit also features CRT-based glass cockpit displays on the A340-200 and A340-300 and LCD-based on -500 and -600. Some composite primary structures are also used.

When fuel costs rose, airlines began looking at the Boeing 777 as an alternative to the A340. As the years went by, orders for the 777 rose, while orders for the A340 began diminishing. It can be argued that, with modern engines having extremely low failure rates (as seen in the ETOPS certification of most twinjets) and increased power output, four engines are no longer necessary except for very large aircraft, such as the Airbus A380 or Boeing 747. In 2005, Airbus had only 15 orders for the A340.

In January 2006, Airbus announced plans to develop an enhanced version of the A340, dubbed the A340E; where E stands for enhanced, because of disappointing sales in the wake of newer longer range Boeing 777s in 2005, and the rise in fuel costs that have justified twin-engine planes as being more economical to operate than four engine planes. Airbus claims that the enhanced A340 will be more fuel-efficient than earlier A340s and will allow the model to compete more effectively with the Boeing 777. When this possible model will be developed has yet to be determined.

One of two initial versions of the A340, the A340-200, with 261 passengers in a three-class cabin layout has a range of 7,450 nautical miles (13,800 km). This is the shortest version of the type and the only version with wingspan measuring greater than the length of the plane. It is powered by four CFMI CFM56-5C engines. The plane's range was one of the longest of the time and it was intended to open long and thin routes, especially over water.

Due to its large wingspan, four engines, low capacity, and improvements to the A340-300, the 200 proved heavy and unpopular with mainstream airlines. Only 28 A340-200s were produced with several now in VIP service. South African Airways is the largest operator with 6 flying mostly on Cape Town routes. This version is out of production. 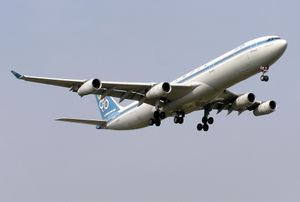 This model is still in production with 219 orders to date of which 211 have been delivered. The largest operator of this type is Lufthansa with 30. 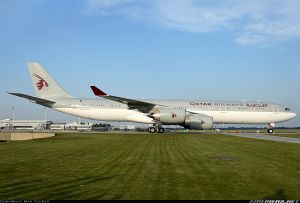 The A340-500 was introduced as the world's longest-range commercial airliner. It made its first flight on 11 February 2002, and was certified on 3 December 2002 with early deliveries to Emirates. While the KC-10 Extender is the longest-ranged production aircraft, the A340-500 was the world's longest-range commercial airliner, until the introduction of the Boeing 777-200LR "Worldliner" in early 2006. The A340-500 can fly 313 passengers in a three-class cabin layout over 8,650 nautical miles (16,000 km). Singapore Airlines, for example, uses this model for its Newark-Singapore nonstop route, an 18-hour, 15,345 km (8,285 nm) journey that is the longest non-stop scheduled commercial flight in the world[1]; the airline does this with a 181 passengers, 2 class layout, and trading payload capacity for extra fuel tanks. The A340-500 is capable of travelling non-stop from London to Perth, Australia, though a return flight requires a fuel stop due to headwinds[2]. Also, Thai Airways International flies this model for its non-stop flights from Bangkok to Los Angeles and Bangkok to New York, while Air Canada flies this model for its non-stop flights from Toronto to Hong Kong.

The direct Boeing equivalent is the 777-200LR, which entered service in February 2006. 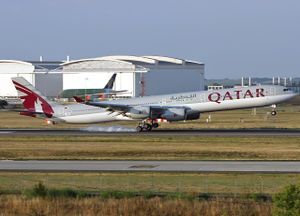 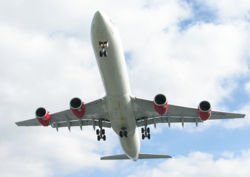 The initial seven A340-600 aircraft were delivered with overweight wings. After the A340-600 launch customer, Virgin Atlantic, elected to receive replacement aircraft, these airframes were delivered at a reduced price to Iberia Airlines and Cathay Pacific. Cathay Pacific uses the plane on its nonstop service between Hong Kong and New York City (JFK).

Emirates became the launch customer for the -600HGW when it ordered 18 at the 2003 Paris Air Show[6]; but postponed their order indefinitely in order to wait for Airbus' future plans for the A340 range to be made clear. This order was ultimately cancelled. Rival Qatar Airways, which placed its order at the same airshow, took delivery of the first aircraft on 11 September 2006.[7]

Hull loss accidents The A340 has not had a fatal incident to date, but it has suffered two hull-loss accidents:

Wikimedia Commons has media related to:
Airbus A340