The KC-10 Extender is an air-to-air tanker aircraft in service with the United States Air Force derived from the civilian DC-10-30 airliner. The KC-10 was the second consecutive McDonnell Douglas transport aircraft to be selected by the US Air Force following the C-9 Nightingale.

Beginning with the Vietnam War doubts began to be raised about the ability of the 700+ strong KC-135 fleet to meet the needs of the United States’ global commitments. The air-refueling fleet was deployed to South-East Asia in support of tactical aircraft and strategic bombers, while maintaining the US-based support of the nuclear bomber fleet. As a result, studies began into the feasibility of acquiring an air-to-air tanker with a greater capability than the KC-135 fleet, but did not progress well due to lack of funding.

The Yom Kippur War in 1973 demonstrated the necessity of adequate air-refueling capabilities. Denied landing rights in Europe, USAF C-5 Galaxys were forced to carry a fraction of their maximum payload on direct flights from the continental United States to Israel. As a result C-5 crews were soon trained in aerial-refueling and the Department of Defense concluded that a more advanced tanker was needed.

In 1975, under the Advance Tanker/Cargo Aircraft program, four aircraft were evaluated: the C-5 itself, the Boeing 747 (which lost out to the C-5 in a previous military contract), the McDonnell Douglas DC-10, and the Lockheed L-1011. Donald Rumsfeld, in his first posting to the Pentagon, selected the DC-10 in 1976

Conversion to the KC-10 involved only minor modifications to the DC-10-30, the largest of which was the addition of a boom control station in the rear of the fuselage and extra fuel tanks under the main deck. First deliveries to the Strategic Air Command (then in control of AAR assets) commenced in 1981. 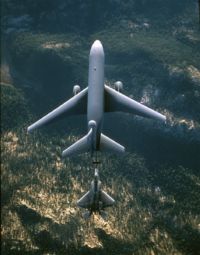 A KC-10 Extender from Travis Air Force Base, California, refuels, what at the time was the F/A-22 Raptor- redesignated F-22 Raptor

The USAF Strategic Air Command had KC-10 Extenders in service from 1981 through 1991, when they were re-assigned to the Air Mobility Command.

In the AAR role the KC-10 has been operated largely in the same way as the RAF’s Tristar (L-1011s), i.e. the strategic refueling of large number of tactical aircraft on ferry flights and the refueling of other strategic transport aircraft. Conversely, the KC-135 and RAF VC-10 fleets have operated largely in the in-theatre tactical role. Excellent examples of the KC-10's strategic role are:

The Royal Netherlands Air Force operates three KDC-10s - former civil aircraft modified to the same standard as the KC-10 - in the aerial refueling role and is acquiring an additional aircraft to serve in the strategic transport role.

There are 59 KC-10 Extenders currently in service.[1] The KC-10 has a significantly larger fuel capacity than the US Air Force's other tanker plane, the KC-135 Stratotanker which has over 500 in service. The USAF's KC-10s are currently stationed primarily at Travis Air Force Base, California and McGuire Air Force Base, New Jersey .

The KC-10 is currently the world's longest-ranged production aircraft, and will continue to hold that record past the introduction of the Boeing 777-200LR.

On September 17, 1987 aircraft tail number 82-0190 was lost after an explosion and subsequent fire which occurred during refueling of the aircraft on the ground at Shreveport-Barksdale AFB, LA. One member of the ground crew died in the accident and the aircraft was written off.[2] This was the only loss, giving the KC-10 the best safety record of any USAF aircraft. 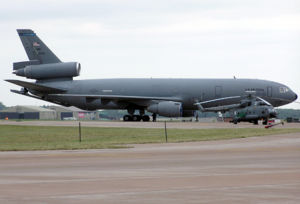