Su-26M at the St Catharines Wings and Wheels.

The Sukhoi Su-26 is a single-seater aerobatics stunt plane from the former Soviet Union, powered by a single radial reciprocating engine. The Su-26 has mid-mounted straight wings and fixed landing gear, the main gear mounted on a solid titanium arc. The Sukhoi Su-26 made its first flight in June 1984, the original four having a two-bladed prop. The production switched to the Su-26M, with refined tail surfaces and a 3-bladed Hoffman prop. Further refinements were made, and the model won both the men's and women's team prizes at the 1986 World aerobatics championships. Su-26 is considered one of the best aerobatics stunt planes by the experts. In the '90s was exported to Argentina. 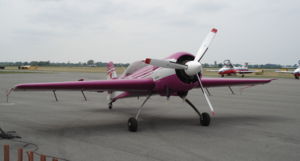 Su-26M at the St Catharines Wings and Wheels. Notice the CF-18 in the background, taking off. 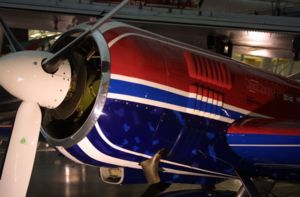 A Sukhoi Su-26 with red, blue, and purple cowling. Displayed in the National Air and Space Museum of the Smithsonian Institution in Washington, D.C.