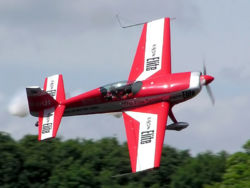 The wing of the Extra 300L is set lower on the fuselage. 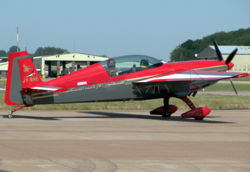 The Extra Flugzeugbau Extra 300 is a competition-level aerobatic monoplane aircraft. Designed by Walter Extra, a retired aerobatic pilot, in 1987. It has since evolved into a higher-performance single-seat version (the 300S/330XS) and has been updated to make use of composite technology.

The aircraft is based on a welded steel tube fuselage covered in light alloy and fabric. The mid-set wing is made of carbon composites under fiberglass shells and uses a symmetrical airfoil. The landing gear is fixed taildragger style with composite main legs and fiberglasss wheel pants.