The Robinson R44 is a small, light, four-seat, piston-driven civilian helicopter produced by the Robinson Helicopter Company since 1992.

While resembling the company's earlier Robinson R22, the R44 is larger and faster than its predecessor. It also features boosted flight controls, a feature not found on the R-22. The Astro model incorporates electric cyclic trim, whilst the Raven models have hydraulically assisted cyclic and collective controls.

Tail rotor direction of rotation on the R44 is reversed compared to the R22 for improved yaw control authority. On the R44 the advancing blade is on the bottom.

The R44, designed during the 1980s by company president Frank Robinson and his staff of engineers, first flew on March 31, 1990. It was awarded an FAA Type Certificate in December 1992, with the first deliveries taking place shortly thereafter. Originally, the R44 Astro was the main production model, but was dropped in favour of the hydraulically-assisted R44 "Raven" in 2000. The Raven II model (2002 onwards) used a fuel injected engine, tuned induction, Optional Air conditioning, Optional Nigth VFR, 28V electrical system, and extended-chord blades for increased performance. 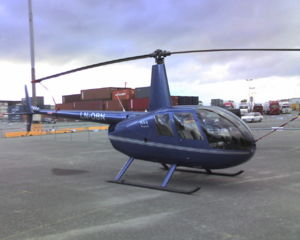 A Raven or Astro, modified with pop-out floats, for water-borne operations. The floats, when activated, inflate in approximately 1.3 seconds from a gas supply tank under the passenger seat. The floats are activated via a lever with an arming pin and breakaway shear pin on the collective.

A law enforcement modification of one of the main production models, with a belly-mounted searchlight, a nose gimbal FLIR system, and enlarged windows. Due to weight limiations, the right-rear seat is replaced with an aluminum panel and the helicopter is usable only as a 3-seat aircraft when equipped as a Police variant. 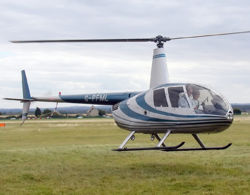 An ENG (Electronic News Gathering) version of the main production model, modified with a gyro-stabilized nose camera and air-to-ground video transmission capability. Due to weight limitations, the right-rear seat is replaced with an aluminum panel and the helicopter is usable only as a 3-seat aircraft when equipped as a Newscopter variant.