The Robinson R22 is a small, light two-person helicopter, designed around 1973 by Frank Robinson and produced since 1979 by the Robinson Helicopter Company.

The first version was produced as the R22, followed by the R22 HP, R22 Alpha, R22 Beta and R22 Beta II. Superficially, the machines look similar. The R22 HP was fitted with a 160 bhp Lycoming 0-320-B2C engine, an increase of 10 bhp over the original R22. The landing skid assembly on the R22 Alpha was modified by extending the rear struts, giving it a slightly nose-down attitude on the ground and better matching its attitude in a low altitude hover. The R22 Beta added an engine speed governor, rotor brake and auxiliary fuel tank. It has been offered as an instrument trainer version, with optional fixed floats as the R22 Mariner, and other special configurations for police work, electronic news gathering, and so on.

The R22 became the world’s top selling civil helicopter soon after its introduction. Due to relatively low acquisition and operating costs, it has been popular as a primary rotorcraft trainer around the world and as a livestock management tool on large ranches in North America and cattle stations in Australia. With its quick response to control inputs, it emulates the performance of turbine powered helicopters, making it easier for flight students to transition to larger aircraft. 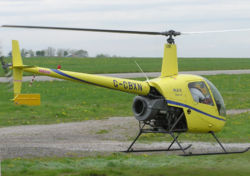 Robinson R22 in the hover

Instead of a floor-mounted cyclic stick between the pilot's knees, the R22 uses a unique teetering "T-Bar" control connected to a stick that emerges from the console between the seats. This makes it easier for occupants to enter and exit the cabin and reduces chances for injury in the event of a hard landing. The teeter bar can be handled from either seat, but the left part of the bar and left rudder pedals can be removed if the left seat occupant is a non-pilot or needs the room for technical or observer duties.

The helicopter rotor system consists of a two-bladed main rotor and two-bladed anti-torque rotor on the tail, each equipped with a teetering hinge. Collective and cyclic pitch inputs to the main rotor are transmitted through pushrods and a conventional swashplate mechanism. Control inputs to the tail rotor are transmitted through a single pushrod inside the aluminum tail cone.

To ease the pilot's workload, a mechanical throttle correlator adjusts the throttle as the collective pitch control is raised or lowered. The pilot only needs to make small adjustments by twisting the throttle grip on the collective throughout the flight regime.

The R22 uses a horizontally mounted Lycoming O-320 (O-360-J2A on the Beta II), four-cylinder, air-cooled, normally-aspirated, carburetor-equipped piston engine, fueled with 100LL grade aviation gasoline. Cooling is provided through a direct drive squirrel-cage blower. At sea level it is capable of producing more power than the transmission and rotor system can safely handle, and to ensure maximum engine and transmission life the O360 must be derated, or operated at less than maximum power. As the air becomes thinner with increasing altitude, engine performance decreases, and the pilot can open the throttle to compensate. By derating the engine at sea level, the R22 achieves acceptable high-altitude performance without use of supercharging or turbocharging, thus saving weight and lowering cost.

A carburetor is used to provide the air-fuel mixture. Carbureted engines are susceptible to carburetor icing, a condition most likely to occur in the R22 in conditions of low (-15°C to 5°C) outside air temperature, high humidity, and low power settings, leading to loss of engine power. A carburetor heat control is available to supply heated air to the carburetor; this can prevent or cure icing, but also causes a reduction in engine power output. The R22 employs a carburetor air temperature gauge, marked to indicate temperatures conducive to icing. The Beta II version of the R22 also includes a "carburetor heat assist" which automatically applies carburetor heat when the collective is lowered below a certain point.

Power is transmitted from the engine to the rotor system through a drive belt. Originally, the R22 used separate v-belts. This system proved problematic, as belt length variations due to manufacturing tolerances caused some belts to be overstressed and break. The problem was solved by replacing the individual belts with a single multi-v belt, running on matching multi-groove sheaves. The upper driven sheave is mounted on the tail rotor drive shaft next to a flexible coupling and can be moved relative to the engine-mounted driving sheave by means of a small electric gearmotor. During startup the gearmotor acts as a clutch, relaxing belt tension and allowing the engine to idle without driving the rotor system. Once the engine is running smoothly, the pilot engages the clutch via switch in the cockpit. The gearmotor is thereafter controlled by a pressure-sensing switch, automatically regulating belt tension during flight. The tail rotor drive shaft also turns the main transmission, delivering power to the main rotor shaft through a pair of spiral bevel gears.

After 2200 hours of flight time, the R22 must undergo an extensive overhaul performed by the Robinson Factory in Torrance California or a factory authorized service center in which many of the critical components of the helicopter are checked and replaced. After 4400 hours of flight the R22 undergoes an even more extensive overhaul, and is considered to be a "new" helicopter once the overhaul is completed.

Information here is abstracted from the Robinson R22 Pilot's Operating Handbook. Data for current versions of the R22 vary slightly.