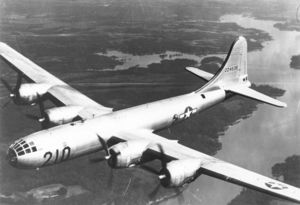 A B-29 being flown for training at Maxwell Air Force Base. Variant uncertain.

The XB-29 was the prototype model delivered to the Army Air Corps, incorporating a number of improvements on the design originally submitted, including more and bigger guns and self-sealing fuel tanks. Two aircraft were ordered in 1940 August, and a third was ordered in December. A mock-up was completed in the spring of 1941, and it first flew on 1942 September 21.

Testing continued until 1943 February 18, when the second prototype crashed. Flown by Boeing's chief test pilot, Edmund T. Allen on a two-hour powerplant performance test, one of the planes engines caught fire. Due to the significant use of magnesium, the engine fire eventually burned through the wing spar, causing the wing to break apart. The crash killed many élite Boeing personnel involved in the design; the pilot, Allen, was chief of the Research Division. After the crash, the United States Army Air Forces and a congressional committee headed by then-Senator Harry S. Truman investigated the B-29 programme. The latter issued a scathing report, prompting the Army Air Force to take over the prgoramme. (×3)

The YB-29 was an improved XB-29 for service testing. Testing began in the summer of 1943, and dozens of modifications were made to the planes. The engines were upgraded from Wright R-3350-13s to R-3350-21s. Where the XB-29 had three-bladed props, the YB-49 had four-bladed. Various alternatives to the remote-sighted defensive systems were tested on a number of them, particularly the fourth one delivered. After alternative arrangements had been fully tested, defensive armament was standardised at five .50-calibre machine guns in turret-mounted pairs. The YB-29 also featured a better fire control system. (×14)

The B-29 was the original production version of the Superfortress. Since the new bomber was urgently needed, the production design was developed in tandem with the service testing. In fact, the first B-29 was completed only two months after the delivery of the first YB-29. 46 B-29's of this variant built by the Glenn L. Martin Company at its Omaha plant were used as the aircraft for the atomic bomb missions, modified to Silverplate specifications. 2,513 B-29's were manufactured by Boeing-Wichita (1,620), Bell-Atlanta (357), and Martin-Omaha (536).

The B-29A was an improved version of the original B-29 production model. All 1,119 B-29A's were built exclusively at the Boeing plant in Renton, Washington, formerly used by the United States Navy.

Enhancements made in the B-29A included a better wing design and defensive modifications. Due to a demonstrated weakness to head-on fighter attacks, the number of machine guns in the forward dorsal turrets was doubled to four. Where the wings of previous models had been made by the sub-assembly of two sections, the B-29A began the trend of using three. This made construction easier, and increased the strength of the airframe. The B-29A was produced until 1946 May, when the last aircraft was completed. It was much used during the Korean War, but was quickly phased out when the jet bomber became operational.

The B-29B was a modification used for low-level raids, designed with the intent of firebombing Japan. Since fighter opposition was minimal over Japan in late 1944, many of the Army Air Force leadership — most notably Curtis LeMay, commander of the 21st Bomber Command — felt that a (lighter) faster bomber would better evade Japanese flak.

In the B-29B, all defensive armament was removed, except the M2 cannon in the tail, which was replaced by two automatically fired .50 in M2 machine guns. The weight saved by removing the gun system increased the top speed from 357 mph to 364 mph (574 km/h to 586 km/h). All 311 B-29Bs were built at the Bell plant in Marietta, Georgia ("Bell-Atlanta").

Never built, the B-29C was a modification of the B-29A re-engined with improved Wright R-3350 engines. The Army Air Force originally ordered 5,000, but cancelled its request when World War II ended. None were built.

When World War II ended, drastic cutbacks were made in military spending, altering the outlook of the B-29 programme. Because Congress was reluctant to continue funding wartime projects, the B-29D was redesignated B-50 to make it appear completely new. Congress fell for the trick, and the B-29D was kept alive, even though no planes flew under the designation.

A number of B-29s were converted to serve as test beds for new systems. These all received variant designation, even though many existed only as a single converted aircraft. These included the XB-29E for fire-control systems (one converted), the B-29F for cold-weather operation in Alaska (six converted), and the XB-29H to test armament configurations.

It was also used in the development of jet engines. Stripped of armament, a converted B-29B designated the XB-29G carried experimental jet engines in its bomb bay, which it would extend into the airstream for testing during flight. This plane was used to test the Allison J35, General Electric J47, and General Electric J73. (See 1, 2.)

Some experimentation in engines continued. For example, six B-29s (redesignated YB-29J) of various designation were upgraded to R-3350-79 engines. Other engine-associated itmes were also upgraded, including new Curtiss propellers, and 'Andy Gump' cowlings, in which the oil coolers have separate air intakes. Two were later converted to aerial refueling tanker prototypes, and redesignated YKB-29J. The remainder were used for reconnaissance, and designated RB-29J.

The B-29 played an important role in developing the effective use of aerial refueling during the late 1940s. The first aircraft involved in this programme were the KB-29M tanker and B-29MR receiver. At first, a grappling system was used; the tanker would unreel its hose towards the receiving aircraft, which would grab it and reel it in. After connecting with internal fuel compartments pumping would begin. While this system was clumsy, it was often used in the late 1940s before a better system was developed. It was most notably used to refuel the Lucky Lady II during her famous circumnavigation of the globe in 1949. 92 KB-29Ms were converted.

As better techniques developed for refueling, some KB-29Ms were modified to use 'probe-and-drogue' systems, in which the refueling hose has a torus-shaped para-drogue attached to the end, and the receiving aircraft has a probe on its nose or wing, which the pilot manoeuvers into the drogue to link the hose.

One KB-29M, redesignated YKB-29T, was modified to have another two refueling hoses on its wingtip. It served as the prototype for the KB-50D.

In an effort to improve on the probe-and-drogue system, Boeing developed a rigid flying boom system, which was first used on the KB-29P. The boom was mounted on the aftmost end of the KB-29P, and had two small wings. With these wings, the boom could be manoeuvered by the operator. The flying boom system became the most common method for In-Flight Refueling and was used on KB-50s and KC-97s and also on modern tankers such as the KC-135 Stratotanker and KC-10 Extender. (×116, converted)

The EB-29 (E stands for exempt), was used as a carrier aircraft in which the bomb bay was modified to accept and launch experimental aircraft. They were converted in the years following World War II. One EB-29 was converted to carry the famous Bell X-1 until it was replaced by a B-50. Another was used to carry and test the XF-85 'parasite fighter'. This fighter was intended to be carried by the Convair B-36 on long-range missions to protect it from Soviet fighters. Yet another EB-29 was used to carry two EF-84B Thunderjet fighters as part of Project Tom-Tom. All three Tom-Tom aircraft and their crews were lost in a crash on April 24, 1953.

The SB-29 'Super Dumbo' was a version of the B-29 adapted for air rescue duty after World War II. Modified to carry a droppable A-3 lifeboat under the fuselage, the SB-29 was used mainly as rescue support for air units that flew long distances over water. With the exception of the forward lower gun turret, all defensive armament was retained. It was used throughout the Korean War into the mid-1950s. It received its nickname from 'Dumbo', the name given by B-29 pilots to the rescue planes who picked them up when they crashed at sea. (×16, converted)

The TB-29 was a trainer conversion of B-29 used to train crew for bombing missions; some were also used to tow targets, and the designation included B-29s modified solely for that purpose. Their most important role was serving as radar targets in the 1950s when the United States Air Force was developing intercept tactics for its fighters.

The WB-29s were production aircraft modified to do weather missions. They conducted standard data-gathering flights, but were also ordered to fly into the eye of a hurricane or typhoon to gather information. Following nuclear weapons tests, some WB-29s would use air sampling scoops to test radiation levels.

In the middle of 1951, three B-29s were modified to participate in the Airborne Early Warning programme. The upper section of the forward fuselage was extensively modified to house an AN/APS-20C search radar, and the interior was modified to house radar and Electronic Counter Measures (ECM) equipment. This development led to production radar picket aircraft, including the EC-121 Warning Star. (×3, converted)

The XB-39 Superfortress was a single YB-29 modified to use water-cooled Allison V-3420-17 inline engines. Since the Army Air Force was concerned that problems might develop with their first choice of engine, the Wright R-3350, they contracted General Motors to do testing on a modified aircraft to show that it could still be used even if the R-3350 failed. Since the R-3350 did not have significant enough problems to prevent its use, no B-39s were ordered.

In 1945, three B-29s were forced to land in Soviet territory after a bombing raid on Japan. Since the Soviet Union was not at war with Japan at the time, the aircraft and crews were interned. Eventually, the B-29 crew members were returned, but the aircraft remained in Russian hands. Seeking a modern long-range bomber, Josef Stalin ordered the Tupolev OKB to reverse-engineer the Superfortress.

The resulting aircraft first flew in May 19, 1947 and immediately began series production. Although largely identical in appearance to American B-29's the Tu-4(Nato reporting name: "Bull"), had Soviet-designed defensive guns and had been re-engineered to suit production using metric tools; resulting in an aircraft that was slightly heavier and slower than the B-29. The Tu-4 presented a significant leap forward in Soviet strategic bombing. Not only did the Red Air Force have the means to deliver nuclear weapons, but Tu-4 had sufficient range to reach the United States on a one-way trip. On October 18, 1951, a Tu-4 was used in the first air-drop test of a Soviet atomic bomb.

In Soviet service, the Tu-4 had been phased out of service by the early 1960s, being replaced by more modern aircraft such as the Tupolev Tu-95. Although the "Bull" never dropped a bomb in anger, the Tu-4 influenced Soviet aircraft technology, particularly airframe construction and onboard systems. The People's Liberation Army Air Force of China is rumoured to still operate up to 15 upgraded Tu-4s, possibly as AWACS platforms.

Advanced transport and bomber variants of the Tu-4 design such as the Tu-70, 75, 80, and 85, were developed and built, but none of these achieved serial production.