The ATR 72 is a twin-turboprop short-haul regional airliner built in France by ATR. It seats up to 72 passengers in a single-class configuration and is operated by a two-pilot crew. American Eagle Airlines, the primary regional airline for American Airlines and the largest operator of the type, refers to its ATR 72s as Super ATRs.

The ATR 72 was developed from the ATR 42. ATR stretched the fuselage by 4.5 m (14 ft 9 in), widened the wingspan, added more powerful engines, and increased fuel capacity by approximately 10 percent. The 72 was announced in 1986,[1] and made its maiden flight on October 27 1988. Exactly one year after that, on October 27, 1989, Finnair became the first company to put the plane into service.[2]

Passengers are boarded using the rear door (which is rare for a passenger plane) as the front door is used to load cargo. Finnair ordered their ATR 72s with front passenger door so they could use the jet bridges at Helsinki-Vantaa airport.[4]

A tail stand must be installed when passengers are boarding or disembarking to prevent the nose from coming off the ground.

The ATR aircraft does not have an Auxiliary Power Unit (APU), but it has a propeller brake (referred to as "Hotel Mode") that stops the propeller on the #2 (right) engine, allowing the turbine to run and provide air and power to the aircraft without the propeller spinning. This eliminates the need for the added weight and expense of an APU.[5] Engines are periodically switched during maintenance to ensure equal wear. 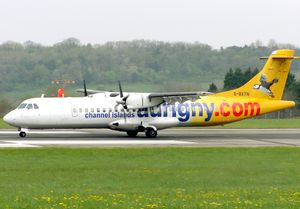 There have been three main variants of the ATR 72 produced and one new variant that has been recently launched.

Originally named the -210A and called the -212A by American Eagle, the -500 is an upgraded version of the -210 using six-bladed propellers on otherwise identical PW127F engines. Other improvements include higher maximum weights and superior performance, as well as greater automation of power management to ease pilot workload.

On Tuesday 2 October 2007, ATR CEO Stéphane Mayer announced the launch of the new -600 series aircraft at a Press Conference held in Washington, D.C.. The new ATR 42-600 and ATR 72-600 will feature the latest technological enhancements while building upon the well-known advantages of the current aircraft, namely its high efficiency, proven dispatch reliability, low fuel burn and operating cost. It will include the new PW127M as standard engine. The -600 series ATR aircraft will be progressively introduced during the second half of 2010.[citation needed]

ATR unveiled a large cargo door modification for all ATR 72 at Farnborough 2002, coupled with a dedicated cargo conversion. FedEx, DHL, and UPS all operate the type.[7]

A VIP version of the -500 is available with a luxury interior for executive or corporate transport.[8]

An anti-submarine warfare (ASW) variant of the -500 (itself a version of the maritime patrol variant of the ATR 42-500) is also in production[9] and has been selected by the Turkish Navy for ASW and anti-surface warfare (ASuW) duties. A total of ten aircraft will be delivered to the Turkish Navy by 2010. The aircraft will be armed with anti-surface missiles and torpedoes for ASuW and ASW missions. They will also be equipped with the AMASCOS (Airborne Maritime Situation and Control System) maritime surveillance system of Thales, as well as electronic warfare and reconnaissance systems, and will also be used for maritime search and rescue operations.[citation needed]

Some 47 other airlines also operate the type in smaller numbers.