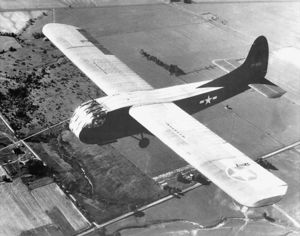 The CG-4A Waco (named CG-4 Hadrian in Royal Air Force use) was the most widely used United States troop/cargo military glider of World War II. Flight testing began in 1942 and eventually more than 12,000 CG-4As were procured. Fifteen companies manufactured CG-4s, including the Wicks Aircraft Company of Kansas City, Missouri, with 1,074 built by the Waco Aircraft Company of Troy, Ohio.

The CG-4A was constructed of fabric-covered wood and metal and was crewed by a pilot and copilot. It could carry 13 troops and their equipment or either a jeep, a quarter-ton truck, or a 75mm howitzer loaded through the upward-hinged nose section. C-46s and C-47s were usually used as tow aircraft.

Whiteman Air Force Base was originally activated on August 6, 1942, as Sedalia Glider Base. In November 1942, the installation became Sedalia Army Air Field and was assigned to the 12th Troop Carrier Command of the United States Army Air Forces. The field served as a training site for glider tactics and paratroopers, and assigned aircraft included the CG-4A glider, and the Curtiss C-46 Commando and Douglas C-47 Skytrain. CG-4As went into operation in July 1943 during the Allied invasion of Sicily. They participated in the D-Day assault on France on June 6, 1944, and in other important airborne operations in Europe and in the China-Burma-India Theater. Until late in the war, gliders were generally considered expendable in combat and were abandoned or destroyed after landing.

The CG-4A found favor where its small size was a benefit, the Allies had the larger Airspeed Horsa where more troops could be carried and the vechicle carrying Hamilcar but the CG could land in smaller spaces. It was used to send supplies to partisans in Yugoslavia.