From PlaneSpottingWorld, for aviation fans everywhere
Jump to:navigation, search
This article or section does not adequately cite its references or sources.
Please help improve this article by adding citations to reliable sources. (help, get involved!)
This article has been tagged since October 2006.

Thrust vectoring is the ability of an aircraft or other vehicle to direct the thrust from its main engine(s) in a direction other than parallel to the vehicle's longitudinal axis. The technique was originally envisaged to provide upward vertical thrust as a means to give aircraft vertical (VTOL) or short (STOL) takeoff and landing ability. Subsequently, it was realized that using vectored thrust in combat situations enabled aircraft to perform various maneuvers not available to conventional-engined planes. To perform turns, aircraft that use no thrust vectoring must rely on only ailerons or flaps; craft with vectoring still must use ailerons, but to a lesser extent.

Most currently operational vectored thrust aircraft use turbofans with rotating nozzles or vanes to deflect the exhaust stream. This method can successfully deflect thrust through as much as 90 degrees, relative to the aircraft centerline. However, the engine must be sized for vertical lift, rather than normal flight, which results in a weight penalty. Afterburning (or Plenum Chamber Burning, PCB, in the bypass stream) is difficult to incorporate and is impractical for take-off and landing, because the very hot exhaust can damage runway surfaces. Without afterburning it is hard to reach supersonic flight speeds. A PCB engine, the Bristol Siddeley BS100, was cancelled in 1965.

Tiltrotor aircraft vector thrust via rotating turboprop engine nacelles. The mechanical complexities of this design are quite troublesome, including twisting flexible internal components and driveshaft power transfer between engines.

Most current tiltrotor designs feature 2 rotors in a side-by-side configuration. If such a craft is flown in a way where it enters a vortex ring state, one of the rotors will always enter slightly before the other, causing the aircraft to perform a drastic and unplanned roll. 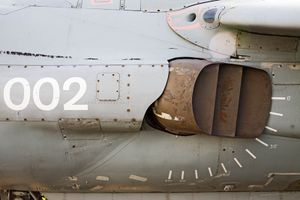 Thrust vectoring is also used as a control mechanism for airships, particularly modern non-rigid airships. In this use, most of the load is usually supported by buoyancy and vectored thrust is used to control the motion of the aircraft. Designs have recently been proposed, especially for Project WALRUS, where a significant portion of the weight of the craft is supported by vectored thrust. The first airship that used a control system based on pressurized air was the Forlanini's Omnia Dir in 1930s.

Now being researched, fluidic injection nozzles divert thrust via fluid effects[1][2][3]. Tests show that air forced into a jet engine exhaust stream can deflect thrust up to 15 degrees. Such nozzles are desirable for their lower: mass and cost (up to 50% less), inertia (for faster, stronger control response), complexity (mechanically simpler, no moving parts or surfaces), and radar cross section for Stealth. This will likely be used in many unmanned aircraft, and 6th generation fighter aircraft.

The best known example of thrust vectoring in an engine is the Rolls-Royce Pegasus engine of the Hawker Siddeley Harrier brother to the BS100. (with variants built by McDonnell Douglas). It is not clear[1] whether the practice of using sudden changes as a combat maneuver were actually applied against conventional Argentine fighters in the Falklands War. Thrust vectoring with the Harrier, also called "Vectoring In Forward Flight" or VIFFing, is actively discouraged by the Royal Air Force and Royal Navy, but encouraged and actively practiced by the United States Marine Corps. The technique has been used in various experimental and development planes, some with vectored thrust in directions other than downwards. Widespread use of thrust vectoring for maneuverability in a Western fighter aircraft would have to wait for the 21st century, and the deployment of the Lockheed Martin F-22 Raptor fifth-generation jet fighter, with its afterburning, thrust-vectoring Pratt & Whitney F119 turbofan.

Lockheed Martin F-35 Lightning II is currently in the pre-production test and development stage. Although this aircraft incorporates a conventional afterburning turbofan (F135 or F136) which facilitates supersonic operation, the variant for the US Marine Corps and RAF also incorporates a vertically mounted, Low pressure shaft-driven remote fan, which is driven through a clutch during landing from the engine. The exhaust from this fan is deflected by a thrust vectoring nozzle, as is the main engine exhaust, to provide the appropriate combination of lift and propulsive thrust during transition.

The Sukhoi Su-30 MKI, in active service with the Indian Air Force, employs 3D thrust vectoring. The 3D TVC makes the aircraft highly maneuverable. The aircraft is capable of near-zero airspeed at high angles of attack and dynamic aerobatics in negative speeds up to 200 km/h. The Su-30MKI is powered by two Al-31FP afterburning turbofans which have the capability to vector in two planes. The TVC nozzles of the MKI are mounted 32 degrees outward to longitudinal engine axis (i.e. in the horizontal plane) and can be deflected ±15 degrees in the vertical plane. This produces a cork-screw effect, thus enhancing the turning capability of the aircraft.[2]

Rockets or rocket-powered aircraft can also use thrust vectoring. In particular, many missiles use this technique since at launch they are moving too slowly to be able to steer effectively without massive fins (and their accompanying drag penalty at high speeds). In addition, rockets often go near or beyond the edge of the atmosphere, where aerodynamic surfaces are useless, making gas-dynamic steering necessary. Examples of rockets and missiles which use thrust vectoring include both large systems such as the Space Shuttle SRB, S-300P (SA-10) surface-to-air missile, UGM-27 Polaris nuclear ballistic missile and RT-23 (SS-24) ballistic missile and smaller battlefield weapons such as Swingfire.

Thrust vectoring can convey two main benefits: VTOL/STOL, and higher maneuverability. Aircraft are usually optimized to maximally exploit one benefit, though will gain in the other.