The North American T-2 Buckeye is the United States Navy's advanced training aircraft, introducing Student Naval Flight Officers to air combat and basic fighter maneuvering. It has been in service since the 1950s, though as of the early 21st century is slowly being retired.

The T-2 is a straight-winged jet, with performance between that of the Air Force's T-37, and the TA-4 Skyhawk which was used for advanced training. In the Naval Aviator syllabus, the T-2 has been replaced by the near-sonic T-45 Goshawk (the US Navy version of the BAe Hawk), which is more comparable to other high performance subsonic trainers, or the USAF T-38 Talon. The T-2 has been noted as one of the less elegant looking aircraft designs to be put into service (see culture section).

More recently the T-2 has been used as a director aircraft for aerial drones. Students start out on a turboprop propeller-driven aircraft- starting in late 1990s the JPATS winner T-6A Texan II. 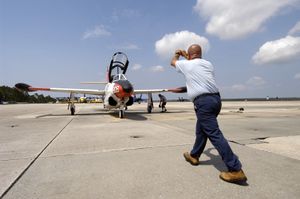 The first version of the aircraft entered service in the mid-1950s as the T2J-1. It was re-designated the T-2A in 1962 under the joint aircraft designation system. The two-seat trainer was powered by one Westinghouse J34-WE-46/48 engine. The aircraft was subsequently redesigned, and the single engine was replaced with two Pratt & Whitney J60-P-6 engines in the T-2B. The T-2C was fitted with two General Electric J85-GE-4 engines. The T-2D was an export version which was sold to the Venezuelan air force. The T-2E was another export version which was sold to the Greek Air Force. The T-2 Buckeye replaced the T2V-1/T-1A Seastar, though the T-1 would continue in some uses into the 1970s.

All T-2 Buckeye's were manufactured by at the North American Aviation plant located at Port Columbus Airport in Columbus, Ohio. 273 aircraft were built during its production run.

The name Buckeye refers to the state tree of Ohio, as well as the mascot of the Ohio State University.

Virtually every Naval aviator from the late 1950's until 2004 received training in the T-2 Buckeye, a career spanning four decades.

While it has no built-in armament, the aircraft has a number of strong points to carry external armament, including gun pods, rockets, and bombs.