The Piper PA-46 Malibu, known plainly as the Piper Malibu, is a light aircraft that is manufactured by The New Piper Aircraft Company of the United States. The aircraft is powered by a single engine and has the capacity for one pilot and five passengers. Early Malibus were all piston-engined, but a turboprop version, the Malibu Meridian, is also available. The piston powered Malibus may be converted to turboprop with the Jetprop DLX conversion.

The aircraft is the second, pressurized cabin class piston powered aircraft with only one engine to ever reach the market (the Cessna P210 Centurion being the other). It is sold mainly for civilian customers; small airlines (such as air tour companies) may also include the aircraft on their fleet.

Work on the PA-46 began in the late 1970s, with a prototype (the PA-46-300T) first flying on November 30 1979. The type was announced in November 1982, apparently to compete with Cessna's newest creation of the era, the P210 Centurion. Like the Centurion, the Malibu was to feature cabin pressurization, a feature not included on the prototype. 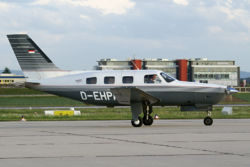 The first example of the initial production version flew in August 1982, and FAA certification was obtained in September 1983. Deliveries started one month later. 404 aircraft with Continental TSIO-520 engines were built before this model was replaced in production by the 350P.

Production of the Malibu Mirage commenced in October 1988. New features included a more powerful Textron Lycoming TIO-540 engine and a strengthened wing. This model remains in production as of 2006. Various changes occurred over the model years. Earlier models had an all King panel and later this became largely Garmin. In 1995, the pilot's windshield became a glass assembly (earlier it had been acrylic glass with a heat strip overlay). In 1996, numerous switches were moved to an overhead console. In 1999, the Mirage gained the strengthened wing designed for the turboprop Meridian.

The Jetprop DLX is a conversion to a turboprop engine of either the Malibu or Malibu Mirage. Either the Pratt & Whitney PT6A-21 or PT6A-35 is available as the powerplant. As of mid September 2006, 185 Jetprop conversions had been done by Rocket Engineering, some 20% of the entire fleet of PA46s.

In 1997, Piper announced its intention to market a turboprop-powered version of the Malibu, and flew a prototype the following year powered by a Pratt & Whitney Canada PT6A-42A of 500 shp (373 kW). Certification was achieved in September 2000 and deliveries began in November that year. Changes made to allow for turboprop power include larger wings and tail surfaces.