The Grumman F9F Panther was the manufacturer's first jet fighter and the U.S. Navy's second. The Panther was the most widely used U.S. Navy jet fighter of the Korean War. It flew 78,000 sorties and was responsible for the first air kill in the war—the downing of a North Korean Yakovlev Yak-9 fighter. Total F9F production was 1,382, with several variants being shipped to Argentina for export.

Development studies at the Grumman company began near the end of the World War II as the first jet engines emerged. The prototype Panther, piloted by test pilot Corky Meyer, first flew on 24 November 1947.[1] Propulsion was a Rolls-Royce Nene turbojet built under license by Pratt & Whitney as the J42. Since there was insufficient space within the wings and fuselage for fuel for the thirsty jet, permanently-mounted wingtip fuel tanks were added which incidentally improved the fighter's rate of roll.[2]It was cleared for flight from aircraft carriers in September 1949. During the development phase, Grumman decided to change the Panther's engine, selecting the Pratt & Whitney J48-P-2, a license built version of the Rolls-Royce Tay. The other engine that had been tested was the Allison J33-A-16, a development of the Rolls-Royce Derwent.[3]

Panthers were withdrawn from front-line service in 1956, but remained in training roles and with Reserve units until 1958, some continuing to serve in small numbers into the 1960s.[5]

The only foreign buyer of the Panther was the Argentine Navy, who bought 24 ex-USN aircraft in 1958. The catapults on the then only Argentine carrier, ARA Independencia (V-1), were considered not powerful enough to launch the F9F, so the aircraft were land-based.

The Argentine Panthers were involved in the general mobilization during the 1965 border clash between Argentina and Chile but no combat occurred. They were taken out of service in 1969 due to the lack of spare parts and replaced with A-4Q Skyhawks. 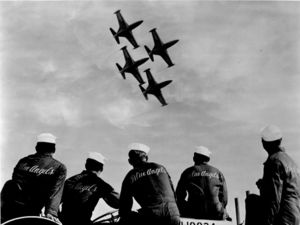 The Blue Angels, under the command of Lieutenant Commander Roy M. "Butch" Voris in 1952, fly their F9F-5 Panther jets in the team's signature "diamond" formation.

The Panther in film

The Panther played a prominent role in the 1954 movie Men of the Fighting Lady. It was also used for the flying sequences in the 1955 movie The Bridges at Toko-Ri, although in the 1953 James A. Michener novel upon which the movie was based, the main character flew an F2H Banshee, not a Panther.