The twin-engined British Aerospace BAe 125 is the world's best selling mid-size corporate jet, now marketed as the Raytheon Hawker 800. It was known as the Hawker Siddeley HS125 until 1977. It is also used by the British Royal Air Force as a navigation trainer (as the Hawker Siddeley Dominie), and was used by the United States Air Force as a calibration aircraft (as the C-29).

The aircraft went through many designation changes during its service life. Originally DH.125, it was renamed to HS.125 when de Havilland became a part of the Hawker Siddeley group in 1959. When Hawker Siddeley Aircraft merged with BAC to form British Aerospace in 1977, the name changed to BAe 125. Then, when British Aerospace sold its Business Jets Division to Raytheon in 1993, the jet acquired its current monicker Raytheon Hawker. In 1996, production was transferred from British Aerospace's Broughton Plant outside Chester to the United States. 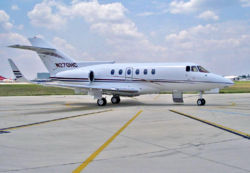 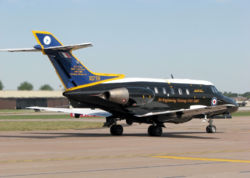 A navigation trainer Dominie of the Royal Air Force.